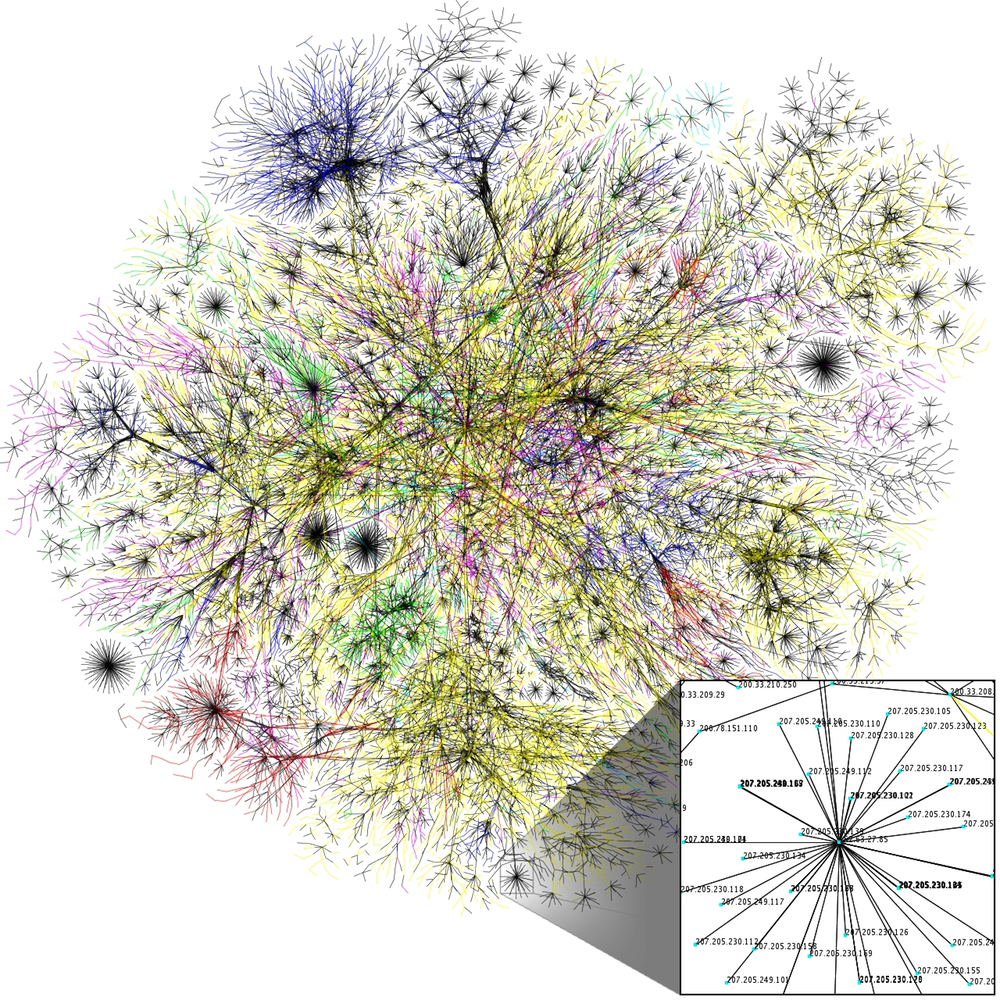 Internet map 1024 - transparent by The Opte Project. Licensed under CC BY 2.5 via Wikimedia Commons.

Out of the gate, we know that clean water, free flowing and easily accessible, is essential to our everyday life. Would you expect people living in a new or older neighborhood to walk several blocks on a dirt road to fill their buckets from a shared water barrel? Not so long ago this was a reality. San Antonians would line up for buckets of water delivered by aguadores, while other people lived in homes with pumps and modern plumbing. Today, we all turn on the faucet and use the water.

Back in 2004, the Federal Communications Commission (FCC) held a hearing in San Antonio. People stood in line for up to eight hours and filled the City Council Chambers to capacity so they could tell the FCC they were fed up with the lack of local and diverse stories in media. They advocated for their media rights, and for federal intervention.

Clean drinking water is not the same as internet access, but an open internet connection has become just as essential to independent living as an accessible, safe water supply. Fast, accessible and affordable internet access allows doctors to use telemedicine to treat our seniors, it brings children together in a safe environment to do their homework after school at the Martinez Street Women’s Center, and boosts our local economy by letting people with not much more than a computer start and run businesses.

Big companies, similar to the Ma Bell from our past, want to start charging for exclusive prioritized access to the web we’ve already paid for. Think first class vs. coach on an airplane. The rules being proposed by the FCC will prevent these companies from prioritizing some internet services over others. Without the rules, the internet as we know it today would change into wide-open fast lanes for the wealthy and put everyone else who lacks the cash on slower toll lanes.

Net Neutrality has been fiercely debated in Washington since a federal court ruled last year that the FCC had to first reestablish the agency’s legal authority to adopt open internet rules. This means the Commission needs to reclassify broadband internet as a telecommunication service (under Title II of the Communications Act). Regulate the internet like a utility. Like our water.

Title II classification would require Internet Service Providers (ISPs) like Time Warner and AT&T to treat all Web content equally, protecting us, the consumers, by restoring two-way communication over an internet free from discrimination and making way for universal and affordable access.

On Feb. 26, the FCC will vote on these new Net Neutrality rules. A decade after that historic FCC hearing, San Antonians once again can make their voices heard on another critical rights issue–the future of an open internet. More than four million people have already contacted the FCC to urge the agency to use its Title II authority to pass Net Neutrality rules.

Republicans have proposed legislation that would strip the FCC of its authority to enforce open internet rules and protect consumers in myriad other ways. But it is not just Republicans who oppose Net Neutrality. Last May, nearly 20 House Democrats signed a letter, authored by Rep. Gene Green (D-Texas), that opposed the Commission using its Title II authority to adopt strong Net Neutrality rules. Rep. Joaquin Castro (D-Texas) initially signed the letter before removing his name.

What is troubling for San Antonians is that to date, our Congressional leadership has been silent at this critical moment on this crucial issue. Media rights advocates in our city can’t understand why. The future of the internet is at a crossroads, and our voices, along with the voices of leadership, can ensure that the FCC takes the right path, and that Congress does not strip the Commission of its authority.

(Via Equality Texas) -- Clergy, faith leaders and people of faith from across the state will gather at the Texas...