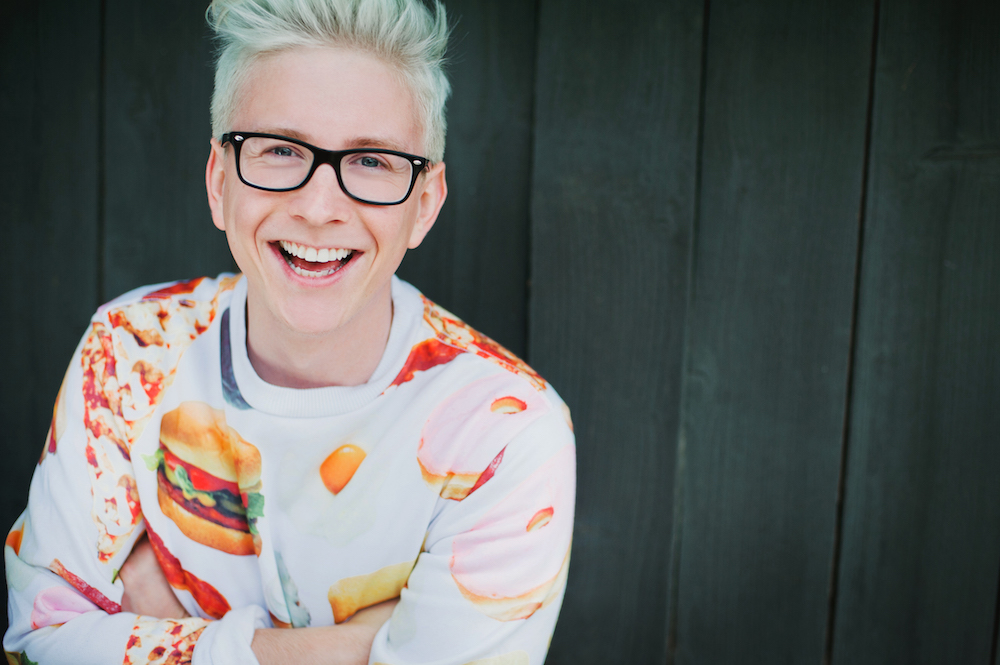 “By being myself, it might impact someone else in a positive way.”

In the dawn of a new golden age for LGBTQ people, YouTube vlogger Tyler Oakley has the distinction of being in the right place at the perfect time. Excitement is brewing over the Teen Choice Award-winner’s upcoming live variety show, Tyler Oakley’s Slumber Party, which will play H-E-B Performance Hall July 9 as part of his very first-ever international tour. When he arrives, he’ll be showing off his brightly colored hair and bringing an unfiltered show that he says he will not adapt to the varying political climates on the map, because, “People know what they’re buying a ticket for.” That ticket promises an up-close-and-personal evening with one of today’s uncontested internet stars.

Oakley’s creative live offering, which recently sold out in Vancouver, includes interactive games, special guests and new stories not yet revealed on his tell-all YouTube video channel. The event is also bringing together fans who may not otherwise have the opportunity to meet outside an internet chatroom.

In addition to his popular weekly vid series, which entertains more than 7 million subscribers, he’s also the co-host of the weekly podcast Psychobabble. He describes the podcast, which will be a year old in September, as “the most pure form of the type of entertainment” that he does. A typical video upload on his channel can range anywhere from four to six minutes, but his podcast is an “unedited, free forum” that allows him and his best friend and co-host Korey Kuhl to discuss the continuous feed of pop culture at length.

Oakley, now 26, credits his education at Michigan State University for preparing him for his unusual success. “I use everything that I learned every single day,” he says of his marketing, public-relations, and public-speaking courses. Before Oakley transitioned full-time to YouTubing, his original career plan was to specialize in social media for brands and nonprofits. “What I’ve found is that it’s the exact same kind of career. I’m just doing it for myself and not a company,” he says.

Last year, Oakley was included in The Advocate’s 40 Under 40 Emerging Voices. Although 2014 was a big year for him, there were a few standout highlights. Like the time he was invited to meet with President Barack Obama at the White House. “I was coming from Hawaii that day and if I had missed any of my flight connections, I could have missed it,” he says of the last-minute invitation. But his Teen Choice Awards also had a layered significance. “Internet people don’t really get recognized by traditional mainstream media award shows,” he says. “To even have that category exist was cool for all of us.”

He may be a new-media darling, but newspapers, magazines, radio and television have a trusted ally in Oakley, who has a passion for the old and new formats and hopes they can coexist and support each other in the years to come. “I think there is room for all,” he says with his signature optimism.

In one of his latest videos, Oakley admits that being on a reality TV show is definitely on his bucket list. He enthusiastically screams through the phone when asked if he envisions himself doing film work as an actor. And in a small example of the rapid-fire thought process that’s lent to his popularity among teens, he suddenly answers the question with the utmost calm.

Between hosting red-carpet events and managing an increasingly busy schedule, Oakley has found time to pay it forward by helping raise money for the Trevor Project, an LGBT youth suicide-prevention organization. “I was raised in Michigan with a very supportive family and a really supportive community so I’m really fortunate in that aspect.”

Because his fans range from middle-schoolers to adults, the only times he really feels he could or should change his show is when the content has an “adult theme” attached. But even so, what is appropriate for teens is seemingly a matter of opinion these days. “Whether [content in my show] is appropriate is something that should be a discussion between a parent and a kid and that’s a decision that they need to make,” he says.

Indeed, being true to himself is the golden egg in his artistry. “By being myself, it might impact someone else in a positive way,” he says. “If I were going to change in any way that could be a missed opportunity. If I was not authentically me, I might not have the same impact or I might not connect with somebody at the same level.”

“If you don’t want to watch, it’s not like anyone is forcing you to. There are plenty of other options,” he says. “It’s not my place to censor who I am.”

Oakley’s message of being the best one can be seems to resonate with young people who are in the process of learning about themselves. But don’t think that means he isn’t keeping the light on for those digital immigrants whose email addresses end with aol.com.

“If you are over an age that you feel is like what the stereotypical internet person might be … don’t be intimidated by the Internet,” he says. “It’s a great place and it’s never too late to join the fun. I’m getting up there and I’m fine with the internet.”

Oakley may have a headstart on his quest to win hearts in the Alamo City. Word on the street is that he makes a mean queso and guacamole dish. “The rumors are true,” he says with his famous giggle. “Anything I have to do, I’ll do.”

There are, like, two tickets left for Tyler Oakley’s Slumber Party, July 9, at the Tobin Center for the Performing Arts. Try to snag them here.

In observance of Independence Day and the Supreme Court ruling on marriage equality, Unity Church of San Antonio will play...