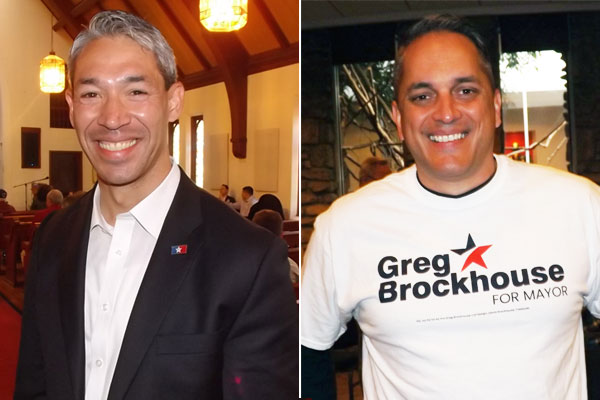 Even though the progressive majority on San Antonio’s city council appears to have survived Saturday’s municipal election, Mayor Ron Nirenberg — who steered much of its agenda — is headed to a June runoff to keep his job.

At press time, and with most precincts counted, Nirenberg led challenger Greg Brockhouse by just three percentage points, or 3,200 votes, which was not enough to claim a clear majority.

At his victory party in Westover Hills, Brockhouse — who ran an underfunded populist campaign — said the results shows Nirenberg is out of touch with local voters. The one-term District 6 councilman said his rival’s plans to deal with climate change, transportation and affordable downtown housing aim to “change San Antonio into something it isn’t.”

At a watch party at a downtown barbecue restaurant — and surrounded by power players such as philanthropist Gordon Hartman and former mayor Phil Hardberger — Nirenberg said he was up for a second matchup with Brockhouse.

After pointing out that he’d won every contested race he run in a runoff, the mayor took a swipe at Brockhouse’s long history of working for the city’s police and fire unions, which heavily bankrolled his underdog campaign.

“The special interests are doubling down on their guy and San Antonio is going to double down on me,” Nirenberg said. “So, I like those odds.”

In the final days leading up to the election, local political experts agreed that the race was likely to be close, especially as Brockhouse used council’s vote to exclude Chick-Fil-A from an airport concessions contract over its donations to anti-LGBTQ groups as a means to energize evangelical voters.

Arturo Vega, a political science professor at St. Mary’s University, said Brockhouse likely benefited from traditionally high turnout from largely white and conservative-leaning North Side districts. While Brockhouse ran a spirited campaign, Vega added that his biggest benefit might have been a disengaged electorate.

“I don’t know that I’d credit Brockhouse as much as I’d blame the mayor’s campaign,” Vega said. “If the mayor wins on a narrow margin, he may need to look at it and say, ‘I may be moving too fast for voters.'”

State Rep. Dade Phelan added the provision to a Senate bill that would bar cities from enacting rules on how...