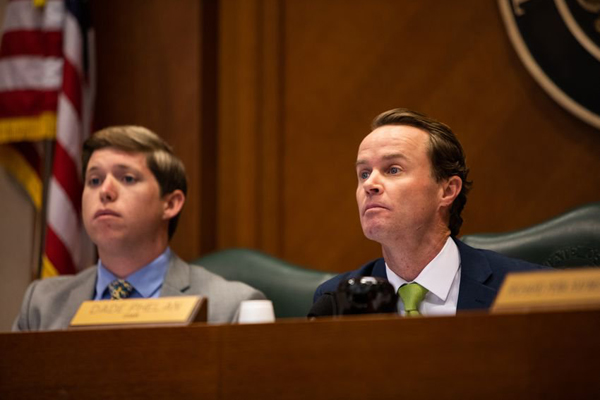 State Rep. Dade Phelan added the provision to a Senate bill that would bar cities from enacting rules on how businesses schedule their employees’ shifts. LGBTQ groups worried that without the language, businesses could pick which employees get certain benefits.

Senate Bill 2486, which the House State Affairs Committee advanced Wednesday in a 10-2 vote, is part of a larger package of legislation state Sen. Brandon Creighton filed to limit the ability of cities to regulate private companies’ employment policies.

After hearing roughly eight hours of testimony Wednesday, state Rep. Dade Phelan, R-Beaumont, advanced a reworked version of the bill — adding the language explicitly protecting local nondiscrimination ordinances to the measure, which would bar cities from enacting rules on how businesses schedule their employees’ shifts.

The move comes after several legal experts and LGBTQ advocates raised alarm bells that without the language in place, the potential new state law could undermine the enforceability of local anti-discrimination ordinances. They fear it would allow businesses to selectively pick and choose which of its employees are eligible to receive benefits that go beyond monetary compensation.

Phelan did not elaborate during the hearing on why he chose to introduce the nondiscrimination protection language into the bill.

Many business groups told lawmakers they support the nondiscrimination language being added, when asked pointedly throughout the night by state Rep. Richard Peña Raymond, D-Laredo.

A spokeswoman for Creighton, a Conroe Republican, said early Thursday the senator was not immediately available for comment on the House’s change to his bill, which came shortly before midnight. But the senator has previously maintained that none of the bills would threaten non-discrimination provisions. Other legal opinions, including one from Texas Attorney General’s Office, have backed up Creighton’s claim.

Aside from SB 2486, the remaining three bills in Creighton’s splintered package of legislation would prevent local governments from mandating paid sick leave, regulate certain benefits practices and preempt local rules that disallow employers from asking about an applicant’s criminal history.

The House committee did not act on Creighton’s other three measures Wednesday evening, and some legal experts say the lower chamber will still need to add the nondiscrimination language to two of the senators’ remaining bills in order to ease advocacy groups’ concerns.

“The best thing they could do at this point is add the language back to all of those bills and make sure the language is the same,” said Anthony Kreis, a visiting assistant professor at Chicago-Kent College of Law.

Kreis said Senate Bill 2488, which would preempt local rules that disallow employers from asking about an applicant’s criminal history, would not have a disparate impact on LGBTQ workers.

The last-minute change by the House committee to SB 2486 that would prohibit cities from regulating how companies schedule employees could require negotiations with the Texas Senate, which will have to decide whether to keep the provision in place, or send the bill to a conference committee made up of members from both chambers.

Rebecca Marques, the Texas state director for the Human Rights Campaign, lauded the House panel’s move to add the language.

“At this point, if the language protecting non-discrimination ordinances is removed again, it would be clear that [Lt. Gov.] Dan Patrick and his cohort of extreme lawmakers are using this legislation to attack the rights of LGBTQ Texans,” she said.

Removal of the non-discrimination language from the original bill Creighton filed ensnared what was supposed to be slam-dunk legislation in a fight over ordinances protecting LGBTQ Texans.

Annie Spilman, the state director for the National Federation of Independent Business, said she was part of a coalition of business groups that met with lawmakers last year to help draft the bill which had the nondiscrimination language intact. She said passing statewide employment regulations was so important to her groups’ members that she would “totally support” adding the language back into the bills.

“This set of bills is above and beyond any sort of tax relief and tax reform. It’s very important to our members,” Spilman said. “This is not a policy discussion. This is about the role of municipal government and where these decisions need to be made.”

After both the Senate and House versions of the legislation appeared imperiled, Creighton filed the four narrower bills — all heard in Phelan’s committee Wednesday — each aimed at accomplishing a slice of the original measure’s goals.

Some LGBTQ advocates again Wednesday said they feared local nondiscrimination ordinances would be overturned in court if there wasn’t language in the bills to protect them.

“The simple fix is to add back to the language that protects local NDOs,” said Samantha Smoot, the interim executive director for Equality Texas.

The National Institutes of Health has awarded $8.67 million to Texas Biomedical Research Institute in San Antonio and Mymetics Corporation...