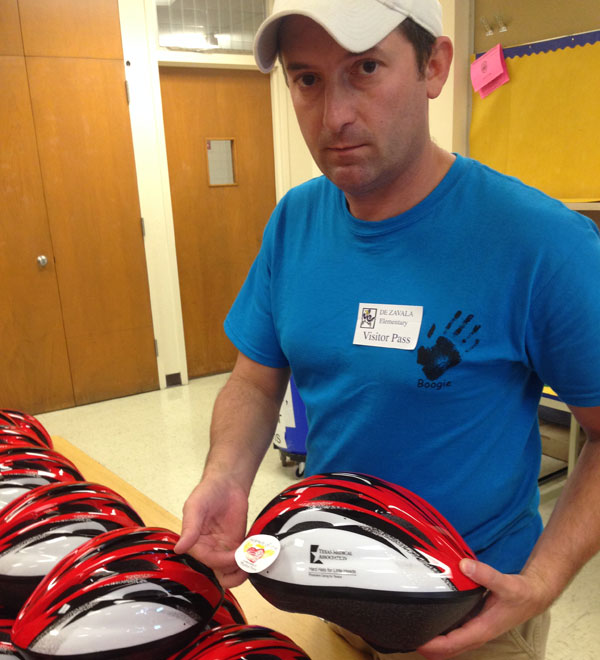 Jerry V. Pierce at De Zavala Elementary School in San Antonio on May 27. His nonprofit, Helmets of Love, will give out almost 650 helmets at the school on May 28. (Courtesy photos)

Memorial Day brings sad memories for Jerry V. Pierce. Three years ago his 11-year-old daughter, Madison Rose, was riding in an ATV with her then-12-year-old brother Quinnton and his friend when it flipped over in the pasture of their home in Valley Mills, Texas, killing her and injuring the two boys.

All three kids had head injuries, none of them was wearing a helmet.

Pierce has been trying to work through the anguish and the grief. He says this year rather than spend Memorial Day at home crying about their loss, his family was going to be at De Zavala Elementary School on May 28 in San Antonio giving out bicycle helmets to students.

The giveaway is possible thanks to Helmets of Love, a nonprofit Pierce’s family started after Madison died. The money used to start the charity was a gift from a friend who originally offered it to help defray funeral expenses. Instead, the family used the cash to start their charity and purchase the first order of helmets.

Helmets of Love’s mission is to teach children and adults that wearing helmets can prevent deaths and head trauma whether you’re in an ATV, on skates, a bicycle, or a skateboard. They will give a free helmet to anyone under 17. The only proviso is the recipient gets a quick educational spiel.

“In the accident, my son went through windshield and was partially scalped. He will eventually have to have some corrective surgery,” says Pierce. “People have to understand that you only have to fall half your height to have major head trauma.”

The 39-year-old Pierce is a single gay man who was married before coming out. He divorced in 2002 and got custody of Madison and Quinnton when they were one and two years-of-age respectively. He lived in San Antonio with the kids from 2007 to 2009. During that time his kids attended De Zavala.

Valley Mills is Pierce’s hometown. He says when he moved back there with the kids, he had support from his mother and his extended family.

In 2013 after Madison’s death, Pierce ran for mayor of Valley Mills and was elected to a two-year term. He ran for re-election but lost. He says a wide margin and small turnout worked against him.

“I’ve always been an advocate and activist,” he told Out In SA. “I was involved in the FFA and student council. My friends used to call me the Mouth of the Bosque River. I think they voted for me because they knew I’d be vocal and stand up to the bullies who were running city government.”

During his tenure, Pierce says he uncovered corruption and wrongdoing from previous administrations. He conducted a forensic audit and exposed a variety of transgressions including misappropriation of funds. A local judge was reprimanded by the judicial review board after one investigation. “It was very productive for our city,” he says, “like a reset.”

Pierce, who is a social worker by trade, says his previous job as mayor and the advocacy he does on behalf of the charity he started in his daughter’s memory are a part of his commitment to public service.

In memory of Madison

Helmets of Love raises the money to purchase the helmets through fundraising events like fish frys, barbecue plates, t-shirts and bake sales. The charity is also looking for corporate sponsors.

The distribution on Thursday, May 28 at De Zavala of almost 650 helmets is underwritten by Helmets of Love’s partnership with the Texas Medical Association. At the school, Pierce and his volunteers went from classroom to classroom fitting every student in the school with a new bicycle helmet and giving a safety presentation.

De Zavala was chosen to receive the helmets after one of Madison’s former teachers contacted Pierce to tell him that some of the school’s top students were going to get bicycles as end-of-school-year rewards and asked whether his organization would like to present them with helmets. Pierce answered yes and added that helmets would be provided for all students.

“Since July 4, 2012, we have given hundreds of bike and ATV helmets to area children and have been blessed by the stories and assistance of many wonderful people along the way,” reads the introduction on the Helmets of Love web site.

“Unconditional love and compassion for others were two of Madison’s strongest traits and we have worked hard to ensure that those traits are the driving forces of this program.”

To make a donation to Helmets of Love go to their website and click on the “contact us” button. You can reach out to Pierce directly via email at [email protected]