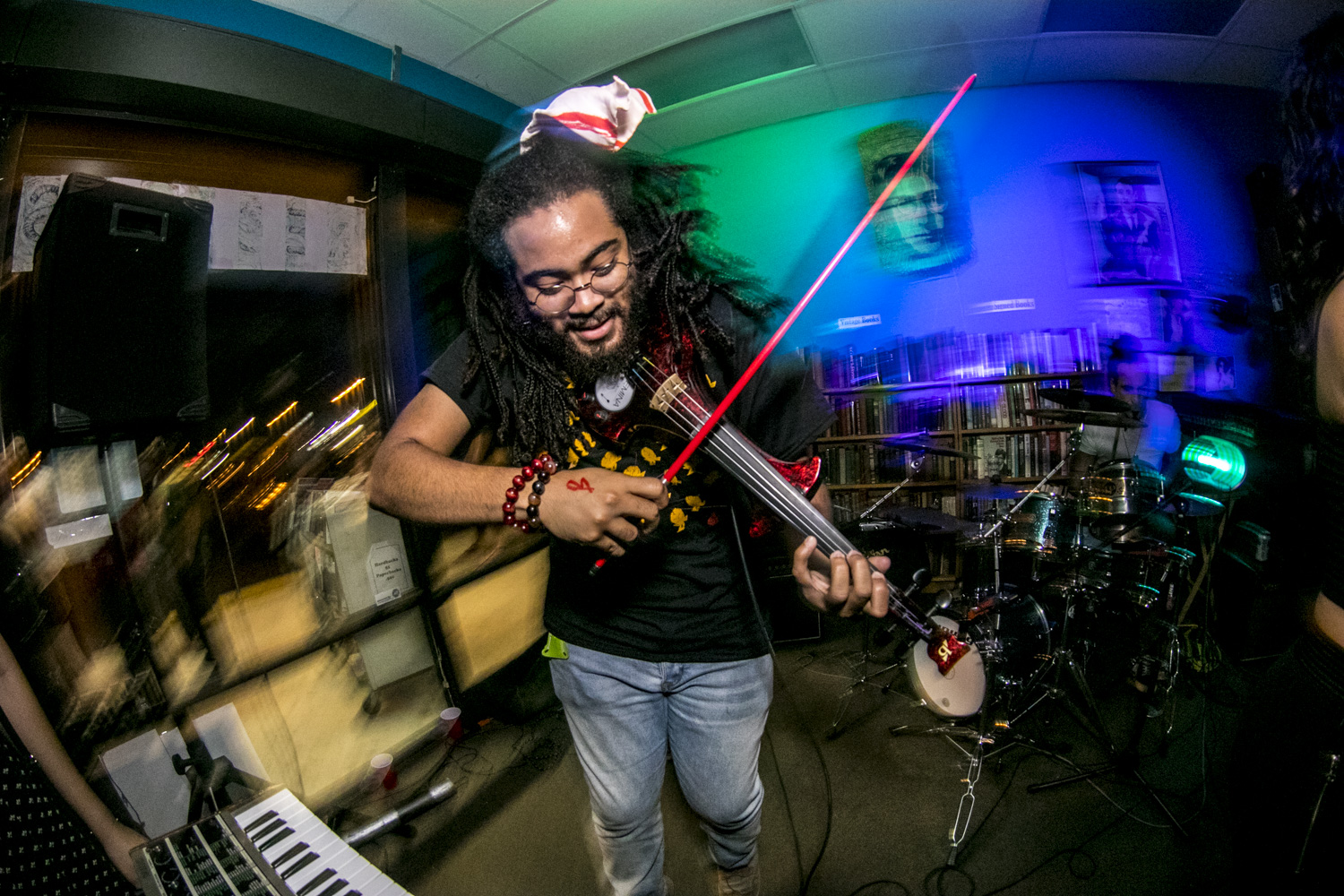 So, first off, your hustle is crazy.
Oh, thank you.

It’s cool watching queer people in the music scene continue to work … to represent and do it well.
I try [laughs]!

Are you from here?
Yeah, I was born and raised in San Antonio … I started at Clark and then my family moved, so I went to Johnson High School.

What kind of label was it?
It was a lot of different stuff … like, one time, [my father] did a cumbia/tejano project, but he really liked doing hip-hop [and] dance music at the time.

Like house music?
Yeah, he was on the news, I remember, because he was one of the first people to have an in-house studio in San Antonio.

Wow.
So ever since I was little, there were people just singing and rapping through the house, so I figured I could do it too … And so I think I started with rapping.

How old you were you?
Seven-ish? Eight?

So you were like eight, spittin’ out bars?
Kind of, yeah. I wouldn’t freestyle or anything — my dad would write the lyrics and I would perform … So I started with that and then I got into the Children’s Chorus of San Antonio (CCSA), which is where I work now as their marketing associate. And then I did ballet.

So you did ballet, too?
Yeah, that was was fun. That was the first time I performed on the Majestic Theatre stage … I remember looking down into the orchestra pit and thinking [ballet] is cool, but I kinda wanna be down there.

So I know before we sat down just now, you were having a meeting with one of your projects The Foreign Arm, which is sick, you get to work with Andrea “Vocab” Sanderson.
Vocab’s a huge role model for me. I think I’m really fortunate to have a lot of powerful women as role models in my life … Of course both my parents [have been supportive], but my mom’s been really pushing, even when the rest of my family wasn’t very supportive of [me] focusing on the arts in general during school. Getting to work so closely with Daniela [Riojas], getting to work so closely with Vocab … there were just all these powerful women guiding me along the way.

So speaking of Daniela … you’re in Femina-X, you’re in The Foreign Arm, what other projects are you in right now?
There’s Deer Vibes, and it’s cool cuz I don’t have to plug in [my violin]. I get to just dance in the audience whenever we perform … And then there’s Saturn Skies — that’s a [project] I started with Robert Wilson, a friend from UIW. He was studying music production and engineering, and I was starting music composition. I was a classical kid and he was more the pop music kid and we just sort of merged everything together.

So what’s the sound of that project?

I guess art pop? People have described us as “indie post-folk,” I guess? But some of it’s also really electronic. [Robert] loves Seal, I love Baths … I really like electronics and crazy chords and time signatures, but then telling a good narrative through songs. How do you find time to do four projects?
It’s also five [including] Arte y Pasión, a flamenco artist collective that I play with and compose for … and that’s really fun. I got to arrange a piece by Mahler for like two instruments. It’s a funny story … Mahler is a Romantic-era composer, so he’s known for having huge orchestras … He has a symphony called The Titan which is for a 200-piece orchestra or something. Stupid stuff. So the main dancer Tamara [Adira] called me and was like, “Can we do this Mahler symphony but [with] just you and a cello and a vocalist?” So I stressed out for a week and figured out a way to do it … It’s nice because I get to use my training in this context and reduce an orchestra down to three people and have it still convey the right idea … I think it’s really rewarding … I had this crisis during my junior year. My degree is [in] music composition … it’s a very classical focus. I was just like, I don’t know if I love the classical world as much as I thought I did. It has its great moments … but there’s a strong sense of tradition that sometimes eclipses doing something new … I realized I needed to broaden myself and not just fit into once place.

So what has been your experience as a queer person of color in genres dominated by cisgender straight white males?
I had to confront very early on that I’m the only black person in this concert hall right now … I had to decide [to] not think about the barriers that are for sure here and … move forward as aggressively as I can, while impressing as many people as I can … Whatever I create is mine. No one can take things from me and I think that’s why my voice may be strong in a lot of the things that I do, because this is me — this is precisely me in this space … and this is how I operate within it.

And what about your experience as a gay person in the indie community?
Consistently, I’m appreciative of the fact that no one makes a big deal of it … If anything, people are just really welcoming of it, like, “Oh cool, another gay guy.” It’s just really comfortable. And I appreciate that cuz it’s just less friction with what I’m trying to do.  There’s been a lot of artists in the scene like yourself, Pink Leche, Wayne Holtz, Saakred, Polly Anna … through their presence and their loudness … The fact that they get to be loud and it’s accepted, for the most part, by the general community. That it’s favored and supported in a such a strong way in all places — in public at shows, on Facebook, everywhere they have a very strong circle of people that are committed to them or helping them and supporting them … it makes it really easy for me coming in later to be like … it’s okay for this to be a part of my identity, cuz it is. But that thing where we all seem to feel like we have to hide it for a long time? I don’t have to enter this community that way, and that’s really, really fortunate … I’m really appreciative of the work that’s been done by those who came before me.

Ron Casola, founder and artistic director of the Live Oak Singers, an LGBT and allies chorus, died on February 21...