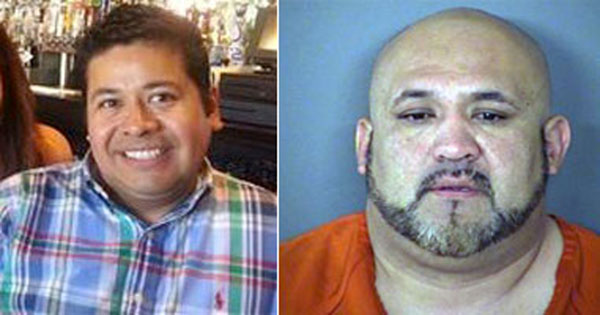 The San Antonio Express-News is reporting that a man who murdered an out of town visitor he met in a local bar in 2013 accepted a plea deal on November 6.

According to police and press reports at the time, Ivan Cruz Aguilar confessed to police that he had murdered Vincent Mark Diaz on December 23, 2013 after going back with him to his room at the Candlewood Suites on South Laredo Street. Aguilar told police that he killed Diaz after he admitted to being HIV positive.

Diaz was in San Antonio for the funeral of his uncle. On the day before the murder, he and two relatives, who also were staying at the hotel, went to the rosary for the deceased and afterwards went for a drink together and then back to the hotel.

Later that evening, Diaz went back out alone to an unnamed bar where he met Aguilar.

According to the San Antonio Express-News, “Security footage from the hotel showed Diaz and a man who police believe is Aguilar return to the hotel around 3 a.m. Dec. 23, with Diaz ‘touching and holding’ Aguilar in the hotel lobby.”

Security cameras later captured Aguilar leaving the hotel around 4:30 a.m. with some of Diaz’s belongings. KSAT-TV reported at the time, “Those traveling with Diaz say he traveled with expensive jewelry and luggage. Two pieces of Louis Vuitton luggage worth $2,000 were missing from the victim’s room.”

The next day, relatives became alarmed when Diaz failed to show up for the funeral. They called the hotel and asked them to check Diaz’s room. According to the affidavit, Diaz’s body was found with his wrists bound and marks on his neck indicating he may have been strangled.

Using security footage, police were able to trace the taxi Diaz took when he went back out.  A witness who was at the bar that night told authorities that Diaz left the establishment with Aguilar.

Police arrested Aguilar on January 13, 2014 and charged him with Diaz’s murder.

According to the police report, Aguilar said he and Diaz had sex: “Aguilar said the victim had told him that he had infected him with a virus known as AIDS. After he killed the victim, Aguilar stated he stole various items of property from the victim out what he stated was ‘instinct.'”

Aguilar has a rap sheet that includes credit card abuse of the elderly, driving while intoxicated and giving false information to police. With the plea deal, he faces between five and 30 years in prison for Diaz’s murder.

Diaz was born and raised in San Antonio and was living in Millbrae, California with Robert Wall, his partner of 14 years. According to his obituary, Diaz was “involved in the Maitri Organization, participated in numerous AIDS walks and was a member of the AIDS Foundation.”

It was the best of times, it was the worst of times at the MODA: Next fashion showcase this past...