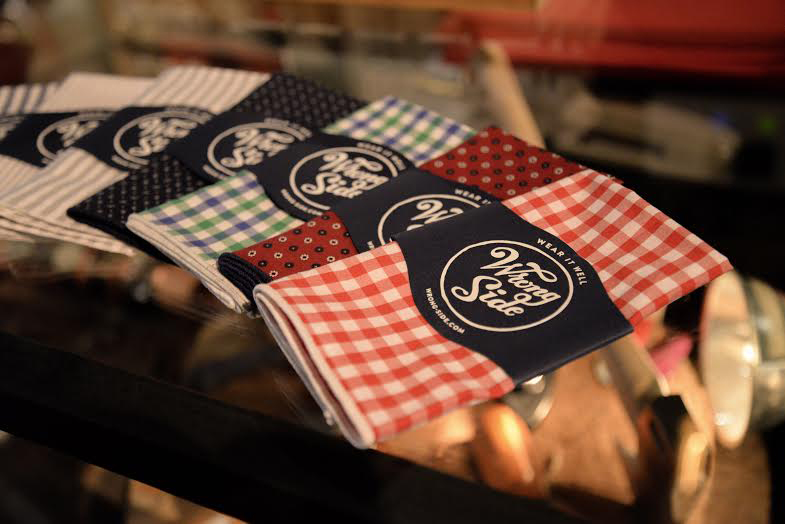 Do you really need a pocket square? Wrong Side, a very specific business honcho’d by two Austin brothers thinks so. Let’s examine the premise.

True, we’ve headed into fall, but this is Texas. (Read: still hot.) And as a pocket square requires a pocket, and not just one that was gratuitously tacked onto your Henley, that means jacket. Jacket itself doesn’t necessarily mean suit or blazer, but, even if wildly floral in print or madly watermelon in color, it does imply a minimum of tailoring. Structure, if not gravitas. And some weight.

Personally, I’m all for throwing on a jacket when the weather allows; it allows me, in turn, to stick with slim jeans and casual kicks all the while retaining a certain sense of style. Too, there’s the demise of the tie to consider: I haven’t worn one, except to a funeral, in years. Wild socks became my default outlet for expression as a result, but I also realize that going commando in the foot department (though not by me) has its partisans. So what’s a guy to do who wants to stand out in a way that’s more subtle (and more to the point, less permanent) than visible tattoos or extreme piercings? I’m forced to reconsider the square.

Wrong Side manufactures its offerings from what is termed last-call shirting. There’s currently one style, Palm Fronds, that has a little patterned flair, but by and large the squares aren’t inherently out there: Gingham is as kicky as it gets. There are, however, three ways of folding and tucking them—at a minimum; you may come up with others. And after that it’s all about contrast. And, of course, attitude.

Sam and Josh, the Austin brothers behind Wrong Side, sell their squares for $32, and you can find them in San Antonio at The Sporting District at the Pearl. There’s also a kind of square-of-the-month club that gets you three of their choice for a discounted $84. And, should you really get caught up in pocket preening, there are other sources. Frankandoak.com is one such; here you can pick your pocket partner from among polite silk and linen options as well. But, once again, this is not New York. Here we might appreciate a little color. The only way to get some might just be to make your own—and why not? It’s pocket art, after all, not pocket science.

A painful separation as SAAF moves patients to nursing homes

A plan to move long-term patients at the San Antonio AIDS Foundation to nursing homes took a toll on the...