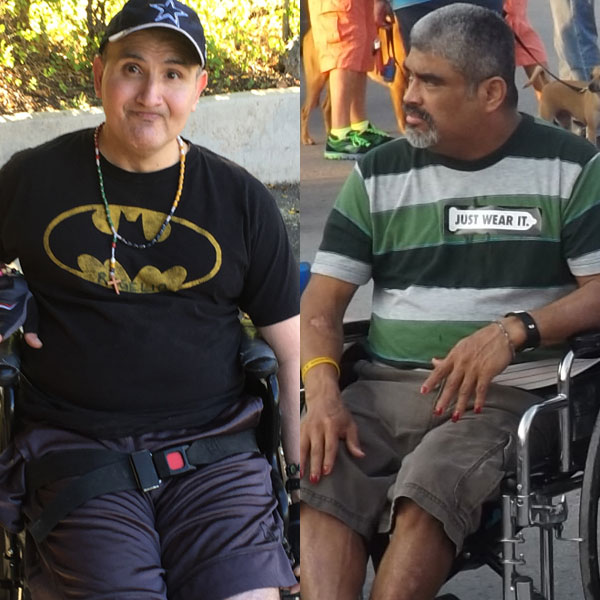 Rogelio Saucedo and Armando Castro were roommates and companions for 16 years while living at the San Antonio AIDS Foundation's SAAF House. On September 18, Castro was moved out to another facility. (Photos by Sam Sanchez)

A plan to move long-term patients at the San Antonio AIDS Foundation to nursing homes took a toll on the relationship of two residents who have been roommates and companions for the last 16 years.

On September 18, the two men, Rogelio Saucedo and Armando Castro, were separated without being given an opportunity to say goodbye to each other.

Saucedo told Out In SA that on Friday afternoon, he was taken to watch television in the dining area and while he was away from their room, Castro was moved out.

One source said Castro was going to a facility in Pleasanton and ultimately to a nursing home in Corpus Christi, his hometown.

“I’m very angry,” Saucedo said tearfully. “I didn’t get to say goodbye and I’ve got no way to get in touch.” He says he is “pissed off and heartbroken” because Castro was being turned over to his family who had previously disowned him for being gay.

Saucedo and Castro were constant companions. Volunteers say the two had pet names for each other and were often seen holding hands while watching television.

Late Friday afternoon, after Castro had been moved, Saucedo was surrounded by a small group of friends and volunteers including two former SAAF board members.

Present also were Anthony Medrano and Laura Barberena organizers with Save SAAF, a group that has been challenging the board’s management of the agency since the dismissal of former Executive Director David Ewell last April.

Saucedo said Castro was not the first patient to be moved and named two or three other residents who had left as well. He wonders when it’s his turn and where he’ll end up.

On July 16, SAAF Interim Executive Director Jack Downey explained in a statement why the agency is moving long-term patients out.

We may not see things in the same light but both our motivations are for the betterment of SAAF clients.  It is not possible for me to outline every detail as to why we are researching options for better placement.  But, in a nutshell the goal is to give residents a quality of life that includes added care such as recreational, speech and physical therapy that SAAF has not been and is simply not capable of giving right now.  We are working towards providing every care and therapy imaginable to residents and clients but until that day comes SAAF is seeking the best possible housing and care alternatives for our clients.

The best interest of SAAF is my interest and I will continue to work to make SAAF a place of compassion, quality care and high ethical standards.

What Downey never explains is what he’s going to do with all those empty rooms.

In a video posted on the Save SAAF Facebook page, Saucedo bares his feelings, “I feel so bad that Mando left. Please help us you out there. Please help us. My baby is gone. I don’t know what to do, my heart is broken.”

Dancing to enrich the earth

“When people hear belly dance, they have one picture in mind, but we’re doing something different.” Queer-based dance troupe Zombie...