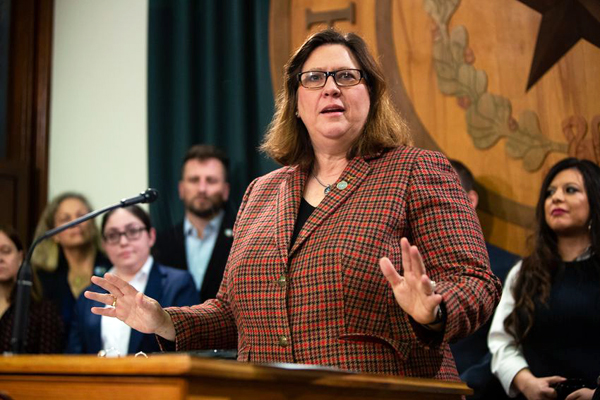 “Having a hearing is sometimes a victory,” said state Rep. Celia Israel, D-Austin, whose conversion therapy ban was debated for the first time this year.

In every session since she was elected to the Texas House, state Rep. Celia Israel has taken aim at the controversial practice of conversion therapy for minors, proposing to penalize state-licensed counselors and therapists who attempt to change children’s sexuality or gender identity.

In 2015, Israel’s first session, her bill was referred to committee but never debated. In 2017 history repeated itself.

But last week, for the first time, the Austin Democrat’s proposal was debated in a public hearing, where she and other supporters exhorted lawmakers to put an end to a practice they said has proven harmful and sometimes led to abuse. Others spoke in favor of the practice, calling it healing and positive.

There was no vote; that historic hearing is as far as the bill will make it this session. Monday at midnight marked the Texas House’s effective deadline for advancing bills out of committee — without a favorable vote by then, House bills are all but dead.

Israel’s bill is just one on a slate of pro-LGBTQ rights legislation that has been perennially filed, but not considered even at the earliest stage in Texas’ Republican-dominated Legislature. This year, a number of such bills were debated in House committees for the first time, but look unlikely to progress further.

“The bill isn’t going to pass, but having a hearing is sometimes a victory,” she said. “I’m pragmatic and I also recognize that if I had a good hearing, that I would do some good. You never know who’s watching.”

Two years ago, when state Rep. Garnet Coleman, D-Houston, filed a bill to add crimes against gay and transgender Texans to the state’s hate crimes statute, it never moved. This year, it was debated in committee. In 2017, a bill that would have smoothed the process for transgender Texans to change the gender markers on their official documentation never moved; this year, a similar measure got a hearing.

And a sweeping bill by state Rep. Jessica Farrar, D-Houston, that aims to prevent anti-LGBTQ discrimination in public accommodations — a measure that stalled last session — was debated in a late-night House State Affairs Committee hearing this year in April.

“Gosh, I love this bill. … It’s sort of sad because it’s actually hard for me to imagine that this will move beyond this committee, unfortunately,” Ash Hall, an advocate for LGBTQ issues, acknowledged at that hearing. “It’s really cool to finally be able to testify in favor of something at this committee. … Thank you for giving this bill some time.”

None of those bills was voted out by Monday’s midnight deadline. But taken together, the hearings indicate that “these issues are finally being considered more mainstream in the Texas Legislature… [after] they became mainstream among the public quite some time ago,” said Samantha Smoot, interim director of Equality Texas.

“It does take persistence and movement building and changing hearts and minds to change public policy,” Smoot said. “We’re seeing this happen this session in a way that we haven’t seen it before.”

That progress has come in a Texas House run by a new speaker, Angleton Republican Dennis Bonnen, and in a chamber populated by a dozen more Democrats than in 2017. Looking back at a 2018 election that was punishing for Republicans, and looking ahead to a 2020 cycle that could be equally perilous, the Legislature has spent more time this year on bread-and-butter issues like property taxes and school finance than on social issues. But where it has tackled them, the House has shown itself to be a somewhat more moderate chamber, advancing a bill that would decrease the penalties for marijuana possession and — so far — avoiding votes on many hardline conservative social priorities.

Perhaps most importantly, the Legislature now has its first-ever LGBTQ caucus, a group of five out women and allies.

“Our membership here in the caucus has made a huge impact,” said state Rep. Julie Johnson, a Dallas Democrat whose wife, Susan Moster, made history as the first same-sex spouse invited to join the Legislative Ladies Club, a social group for Texas House members’ spouses. “It’s hard to hate up close.”

For advocates, though, there’s lots of progress still to be made. Texas has no law explicitly protecting LGBTQ communitities from being fired, or denied housing, based on their identities. Various proposals to address that — either in a sweeping non-discrimination bill, or in a more piecemeal approach, like Dallas Democrat Eric Johnson’s repeated efforts to ban employment discrimination — look to be stuck in the legislative gears again this year. With less than a month to go before session ends, those measures are unlikely to make it to the governor’s desk — or even the floor of either chamber.

And, of course, some bills this session — mostly out of the Texas Senate — have put gay rights advocacy groups on defense. There is always the concern, too, that even bills advocates consider inoffensive could be amended on the floor.

Perhaps the biggest fight so far has been over what began as a relatively straightforward bill to override cities’ ordinances requiring businesses to offer employees paid sick leave. The original bill protected local non-discrimination ordinances — which could have been threatened by a state law overriding local measures governing employment policies — but a Senate committee substitute stripped the protection out, stoking fear among advocates. The Senate ultimately passed a suite of paid sick leave bills without any explicit protections for those non-discrimination protections — language advocates said leave gay communities vulnerable, though the bills’ author insisted they do not threaten non-discrimination ordinances.

But even the progress of that legislation seems to bode well for advocates. The House State Affairs Committee restored the non-discrimination language. State Rep. Dade Phelan, the Republican who chairs the powerful panel, said in an interview that he’s “done talking about bashing on the gay community.”

“It’s completely unacceptable,” said Phelan, who represents Beaumont. “This is 2019.”

The Senate has also passed what many LGBTQ advocates consider the session’s biggest threat to their community: a sweeping religious refusals bill that would allow occupational license holders like attorneys and social workers to cite “sincerely held religious beliefs” when their licenses are threatened over professional speech or conduct. Advocates, concerned that the bill would embolden workers to deny service to gay and transgender clients, call that bill a “license to discriminate.” Lubbock Republican Charles Perry, its author, insisted during a floor debate that “this bill does nothing to promote any illegal or discriminatory activity.”

That bill has been referred to Phelan’s House committee, but he has not scheduled it for a hearing.

In the meantime, Senate bills to advance LGBTQ rights have gone nowhere.

State Sen. José Menéndez, a San Antonio Democrat who filed many of those, said he has requested hearings for his anti-discrimination bills, but so far none have been scheduled.

“We are very aggressively trying to get our bills heard,” he said. “I will keep pushing. … Right now, with the politics of the membership of the Senate, it’s very hard to get progressive legislation through.”

Advocates and House Democrats said that discrepancy can be explained with one word: “leadership.”

“It all comes down to Dan Patrick,” Smoot said. “Our observation is that Speaker Bonnen is viewing these issues from a political lens and what he feels is best for his members, whereas Dan Patrick is motivated by his animus toward LGBTQ people.”

The lieutenant governor’s office did not return a request for comment.

In 2017, the more moderate House was a bulwark against the divisive policies of the more conservative Senate. Perhaps most notably, a “bathroom bill” that would have restricted the rights of transgender Texans to use certain public facilities passed the Senate but never made it to the House floor.

This year, the House looks to have maintained that role, watering down or stalling altogether measures that cause LGBTQ advocates worry. But the chamber seems to be going further, in part because Bonnen, the new speaker, has installed Democrats at the helm of important committees — and, lawmakers said, given them freedom on how to run their panels.

“He didn’t clamp down on everybody and say, ‘You can’t have hearings on this stuff,’” Israel said.

Israel’s conversion therapy ban was heard in the House’s powerful Public Health Committee, which this year is chaired by a powerful Democrat in veteran lawmaker Rep. Senfronia Thompson. That’s the first step of many over many years, advocates said, toward making it law.

“You take two steps, and then next session, you take two more steps, and you continue to build the road of full equality,” Johnson said. “But it has to start somewhere.”

Organizers at Pride Center San Antonio are busy readying two fundraising events, the Emerald Ball on May 25 and the...