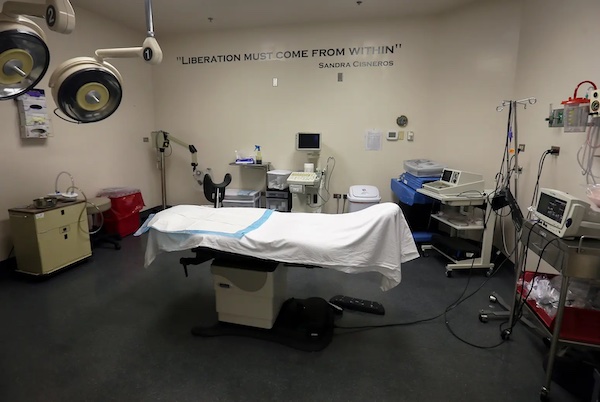 A surgery room at the Whole Woman's Health Surgical Center in San Antonio on March 18, 2013. (Photo: Jennifer Whitney for The Texas Tribune)

While Texas’ controversial abortion law strictly refers to women in its phrasing, it also limits access to the procedure for transgender and nonbinary people who are able to become pregnant.

By Neelam Bohra, The Texas Tribune

Samson Winsor moved across the country from Utah to Austin in 2019, hoping he would feel less out of place. The Texas capital city had creative opportunities and cheaper living costs than places like Los Angeles and New York City while still having a substantial population of transgender people to support his identity as a transgender man.

But Winsor said he’s still afraid. Weeks after having sex with someone, he noticed his menstrual period was late. While his hormone therapy affected the consistency of his periods, he worried about the possibility of being pregnant. Winsor anxiously awaited test results, recognizing how limited his options would be if he were pregnant.

He was overcome with relief when he learned he wasn’t.

“I didn’t want to be a pregnant man in Texas,” Winsor said. “It was terrifying for me because I realized, by the time I could even confirm I was pregnant, I didn’t know if I could even get somebody to look at me or even take me seriously walking in the door.”

The Texas Legislature passed a bill during this year’s regular session that severely limited abortions in the state, banning the procedure when embryonic cardiac activity is detected, usually around six weeks into pregnancy. While the law strictly refers to pregnant women in its phrasing, the law also limits Winsor and other transgender and nonbinary people who can become pregnant from accessing abortion services in the state.

But the impact on them has scarcely been addressed by Texas policymakers. When it comes to abortion, trans people “have been left out of the conversation, which means that the impact for them is even more significant,” said Anna Rupani, executive director of Fund Texas Choice, a nonprofit that financially assists people in accessing abortions.

For these communities already familiar with discrimination in their daily lives, the stigma around being a pregnant, transgender person could affect everything from their safety and financial stability to their mental and physical health.

The law, crafted by state Sen. Bryan Hughes, R-Mineola, is not enforced by government officials. Instead, it relies on private citizens to sue those who “aid or abet” others in getting an abortion banned under the statute and allows plaintiffs to collect at least $10,000 if their suits are successful.

The U.S. Supreme Court found the unique enforcement mechanism questionable enough to allow a legal challenge against Texas’ law to proceed, but declined on Dec. 10 to block it. The matter now goes back to a lower court, but a long road still lies ahead before the statute’s future is determined.

Winsor said the potential legal liability for those who help others get an abortion also made him uncomfortable to accept friends’ offers to get him out of the state if he were pregnant.

The law “is oddly reminiscent of my time in the Mormon Church,” Winsor said. “When I came out as trans at the time, we were considered apostates. It was a sin to even be associated with us. I see parallels with the law, if you try to help somebody terminate a pregnancy.”

In 2017, several hundred transgender and nonbinary people in the U.S. received abortions at facilities that did not provide transgender-specific health services like hormone therapy, according to a study published in the American Journal of Obstetrics and Gynecology.

Fund Texas Choice and the Texas Equal Access Fund, another group that funds abortions for Texans, said they’ve worked with several transgender and nonbinary patients but don’t track the gender demographics of their patients to avoid being intrusive.

The state does not track the gender identities of people receiving abortions either, but it is home to the second-largest population of transgender people in the U.S. More than 125,000 Texans identify as trans, according to a 2016 study from the Williams Institute at the University of California at Los Angeles School of Law.

“People already hate that I exist and people like me exist,” Winsor said. “They refuse to believe that we’re men, but we’re still having kids, we’re still getting pregnant, and we still have to access abortions. What’s that going to look like, when the thing they say doesn’t exist looks them right in the face and says, ‘I’m a pregnant man’?”

Many transgender men have carried pregnancies to term, but doing so is not without its unique risks and complications. The impacts of hormone therapy on pregnancy can change the medications and dosages that pregnant transgender people should be prescribed, according to the American College of Obstreticians and Gynecologists, and some reproductive health facilities aren’t able to provide transgender-specific treatments.

The abortion law hits marginalized communities harder because those who can’t afford to leave the state don’t have the choice of getting the procedure elsewhere — including many trans people in Texas.

The community faces gaping income disparities. Cisgender employees, or those who identify with their birth sex, make 32% more money a year than transgender employees, regardless of similar or higher education levels, according to a recent report from McKinsey & Company.

Winsor said many transgender people aren’t able to access health care specific to them as it is, and financial disadvantages can add on to the medical barriers. He also worried about the dangerous implications of carrying a pregnancy while presenting as male — 2021 marked the most violent year on record in terms of violent deaths of transgender people, according to a Human Rights Campaign report.

“We’re up against all sorts of different prejudices, and having a child could even out me at work,” Windsor said. “My body is in danger, and the child’s body would be in danger.”

State Rep. Donna Howard, D-Austin, who chairs the women’s health caucus, said lawmakers who oppose abortion restrictions know there are trans men who can become pregnant and need to address the difficulty being pregnant can create for them.

“(Trans) pregnancies need to be addressed in terms of providing the option for terminating the pregnancy and considering what the implications will be for a person who presents as male, and what the impact is going to be on that person’s job and that person’s place in general in their community,” Howard said.

When asked about the impact of Texas’ abortion ban on the transgender community, Human Coalition, a nonprofit in Texas that opposes abortion and supported the passage of the law, said it had no data on abortions among transgender people and declined further comment.

The need to be seen and considered when discussing health care policies is part of the push for using more inclusive language, which can make trans people feel more welcome, Winsor said.

But when Texas’ abortion law drew national attention, it also started an argument over the use of the term “pregnant people” over “pregnant women.”

Margaret Atwood, author of “The Handmaid’s Tale,” a book with imagery that’s popularly used to protest against abortion restrictions, recently tweeted an article questioning the terminology.

Windsor said he understands the frustration of women protesting the phrasing, but hopes they can also remember that both communities face stereotypes and stigma. He said he hopes they can find common ground to work for the same rights.

“Having lived as a woman, even though I didn’t identify that way, I learned that basically, I wasn’t a person. Cisgender women already know that that’s how they’re treated in society. So, I don’t necessarily blame a lot of angry cis women who are upset or frustrated,” Winsor said. “But we are talking about women, too, when we say pregnant people. We’re trying to remind people that women are people — it doesn’t stop at body parts.”

The stigma isn’t limited to transgender adults — transgender minors often face the same challenges but with fewer resources. They’re often erased from the conversation because they aren’t always identified as gender nonconforming or trans in studies and reports, which makes it harder to estimate the number of trans teens who have become pregnant or sought abortions.

Jane’s Due Process, a nonprofit that specifically assists minors in accessing abortion — which can include helping teens navigate through courts when they’re unable to secure parental consent for the procedure — said it’s working hard to be more inclusive. But discrimination is written into the system, said Rosann Mariappuram, executive director of the organization.

Even the courts refer to minors seeking abortions as “Jane Doe,” Mariappuram said.

“There is an assumption that only straight teens are in need of birth control or abortion care, but a lot of youth need these services,” she said. “To be inclusive of gender and sexual orientation for birth control and not assume what kind of sex or who (their) partners are has been a point for us.”

Texas Republican lawmakers’ agenda has heavily targeted transgender youth recently. They passed House Bill 25 into law during the third special legislative session this year, which requires students to participate on sports teams that correspond with the sex listed on their birth certificate at or near their time of birth, rather than with their gender identity.

They have also asked the Texas Department of Family Protective Services to determine whether some gender confirmation surgeries for transgender children are child abuse, targeted books in school libraries that tell stories with LGBTQ characters and pressured a children’s hospital program that offered mental health services and hormone treatments to transgender children to dissolve.

The relentless targeting has taken a toll on the mental health of many in the transgender community, and many already struggle under the weight of gender dysphoria, or the feeling of not being comfortable in one’s biological gender or body.

For some transgender men who do become pregnant and are unable to access an abortion, carrying a pregnancy to term runs the risk of evoking extreme gender dysphoria, Winsor said.

“I don’t know if I could’ve handled the dysphoria of being and seeing myself be pregnant and having to go through that,” he said. “It would’ve been so overwhelming. I worry it would have cost me my life.”

Disclosure: Human Rights Campaign has been a financial supporter of The Texas Tribune, a nonprofit, nonpartisan news organization that is funded in part by donations from members, foundations and corporate sponsors. Financial supporters play no role in the Tribune’s journalism. Find a complete list of them here.

Gunfire on the Main Drag, San Antonio's LGBTQ+ nightlife district, struck a worker overnight and left the man with a...