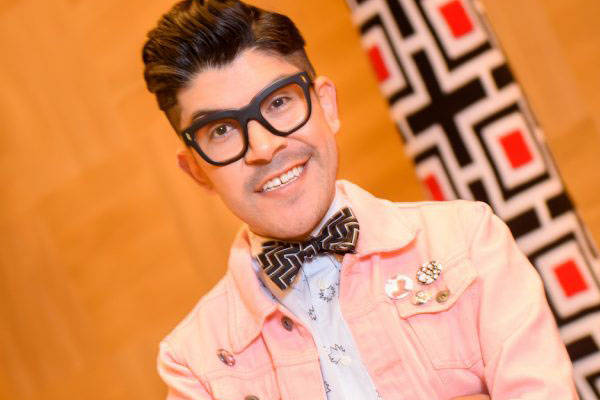 Fashion designer Mondo Guerra will be at the McNay Art Museum on November 30. (Photo: Corporate Image Photography via LatinoUSA.org)

Fashion designer Mondo Guerra, who appeared on two Project Runway television series, will be at the McNay Art Museum in San Antonio on November 30 where he will join San Antonio Express-News columnist Emily Spicer for a conversation on the eve of World AIDS Day.

In 2010, Guerra finished as runner-up on Season 8 of Project Runway during which he came out as HIV positive. Two years later, he won the first season of Project Runway All Stars. He went on to become a mentor on Lifetime’s Under the Gunn spinoff series.

Since his days on Runway, Guerra has served as an advocate for HIV organizations, becoming a spokesperson for Merck’s Project I Design and Subaru’s Dining Out For Life.

In an interview with Lover Boy Magazine, Guerra explained the process behind disclosing his HIV status on Project Runway. “To be honest I wasn’t thinking about coming out as HIV positive. It wasn’t planned. It all happened very organically. Moment by moment it all fell into place. In retrospect I have an understanding of why though. Creativity has always allowed me to live. Creativity was my escape, my best friend. After 31 years of living with this existence I was given the opportunity to share my life through design.” Shortly after disclosing his HIV status, Guerra designed two limited-edition t-shirts with a Day of the Dead theme in honor of World AIDS Day. The shirts were sold to raise funds for amFAR, an AIDS research organization. “The Mexican tradition of Day of the Dead isn’t about death at all,” Guerra told the Huffington Post at the time. “It’s about celebrating the memory of loved ones. I think it’s a smart choice to use this for this cause.”

In an email to Out In SA, Kate Carey, head of education for the McNay, says Guerra’s visit compliments the museum’s current retrospective of San Antonio artist Chuck Ramirez whose work was informed by his HIV status and ethnic heritage. “We had a lot of reasons for wanting Mondo Guerra to speak at the McNay—I mean he is such a fan favorite from Project Runway. But what attracted us most is his commitment to advocacy for HIV organizations and World AIDS Day,” Carey said. “We thought it could be a nice moment to recognize the connection between two designers (Chuck, of course started in graphic design and worked in commercial design for HEB), who both come from Mexican-American roots, and who both addressed their shared HIV+ status in their work with a mixture of humor and poignancy.”

Guerra continues to design everything from apparel to eyewear to Crocs. A post on his website says he is “currently focused on the development of cutting edge multimedia content and continues to create modern designs that blend his fashion and social consciousness.”