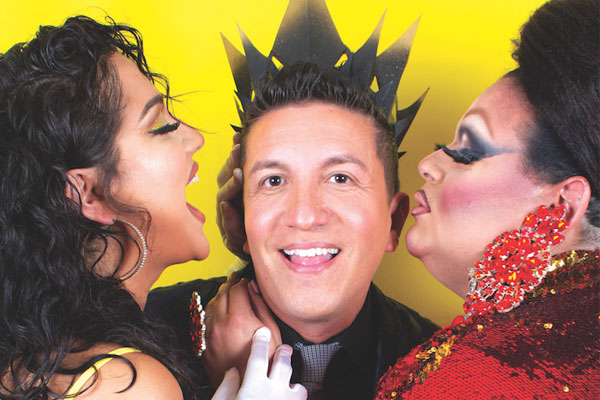 It’s an muggy Sunday evening as I step out of the car and walk toward Heat nightclub, one of several queer-oriented venues on the North Main Street Strip. Alaska Thunderfuck 5000 – who came to fame on the competitive drag-queen show RuPaul’s Drag Race, and is better known as just Alaska – is set to perform at the club. After a refreshingly cold blast from the Heat’s AC, I’m led to my seat and wait for the show to begin. I see a couple of friends, who happen to be gay, sitting across from me. I wave and look around, and it dawns on me that this nightclub feels like a family BBQ or a party with close friends, and I am reminded that drag shows are and have been the gay commons.

Drag, and the LGBTQ community that supports its queens, have existed for decades in San Antonio. Before Alaska first appeared on season five of RuPaul’s Drag Race, before our own Ada Vox made it to the top ten on American Idol this year, and even before RuPaul took the once-underground gay-club genre of performance art in 1996 to the living rooms of Middle America with the VH1 series The RuPaul Show, the drag community was a thing in San Antonio.

In what’s being called the golden age of drag, who’s throwing down the coins to bring RuPaul’s Drag Race queens down to San Antonio? Who’s helping to keep the homegrown scene energized?

The answer, known to most anyone who knows the drag community here, is Rey Lopez, a Brownsville transplant who moved to San Antonio in 1998.

Since 2011, Lopez has been creating spaces for drag to thrive. When no one was booking the RuPaul’s Drag Race queens here, Lopez saw a need and met it with his shows. From queens competing for titles at Talent Night at the old Paper Moon in the 1980s to the Haus of Andrews Pageant hosted by the late Erica Andrews, Rey Lopez has carried the torch (song) into this latest generation of drag.

Born and raised in Mexico before moving to Brownsville when he was 10, Lopez used to direct plays in the summer when he was a young adult, but got too busy when he shifted his focus to an import/export business for machine parts.

“I’ve done 20 plays, and I’ve [facilitated] acting workshops,” Lopez said. “My dream job was to open an acting school. But because I got into the import/export business, I forgot about my dream.”

Lopez was a huge fan of Mexican comedies and Telenovelas. 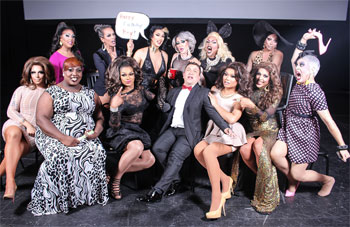 Lopez’ first experience with drag came in 1992 at his cousin’s going-away party where the queen Kelly Kline performed.

“I dated Kelly Kline. Kelly Kline was my cousin’s best friend, so she was always at the house. Kelly started performing in the Valley, and I got introduced to the scene, and I liked it. That’s how it started.”

Lopez moved to San Antonio following a disagreement with a business partner for the import/export business. He was 23 years when he arrived on October 27, 1998. However, a few years later, Lopez reconnected with his partner and re-kindled the business, leading him to open two restaurants and a salon.

In 2011, Lopez had to shut down his businesses after six years because of the economic decline in Mexico. The downturn hurt their import/export sales, which was helping keep his restaurants and salon afloat.

“I lost everything,” Lopez said. “I was losing my house. I was losing my cars. I was going crazy. Then, one of my friends got me an interview for a job, and on October 23, 2011, I started working for Jim Adler & Associates.” 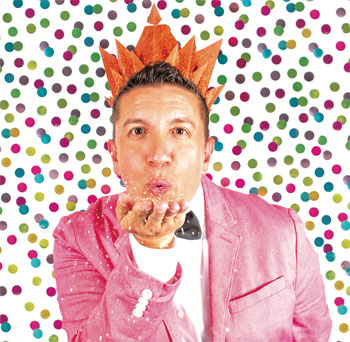 A month before landing the job with Adler law firm, the manager of the Old San Juan, a Puerto Rican club off of Walzem, asked Lopez how to turn Thursdays into a gay-themed night.

“I told him no one’s bringing the RuPaul girls to San Antonio – why don’t you just bring them?” Lopez said. “He’s like, ‘Well, I don’t know. Do the research. Let’s do it.’… So I did my research, and within 30 minutes I was able to figure out how much it would cost to bring down Manila.”

Manila Luzon was the runner up on the third season of RuPaul’s Drag Race*.

“I told him ‘Manilas’s gonna cost this much, and he said, ‘OK, let’s go half and half,’ and I said, ‘Well, I don’t have any money’, and he said, ‘Well, try to get the money.’” Lopez wound up borrowing the funds he needed. “We closed the deal and started promoting, and it was packed” – just four days after Lopez started his job at Jim Adler’s.

After booking Drag Race alumnus Yara Sofia, Jessica Wild and Raven, and in attempt to maximize gains on his investment, Lopez found a new home for his shows at the Silver Dollar at the top of the North Main Street Strip next to Hogwild Records.

“San Antonio was always good at having drag shows, but it was dying out,” Lopez said.
And honestly, when I moved to San Antonio in 2008, while drag was alive, the scene was modest. In fact, from the stories I heard from seasoned queens who competed in Talent Night in the 1980s, it wasn’t nearly as big as it was back in the day.

After relocating to the Saint for a hot minute, Lopez found the show’s permanent home at Heat where, since 2013, his drag shows have been bringing down the most talented and famous queens in the industry.

“I feel like my brand grew as RuPaul’s Drag Race began growing on TV,” Lopez said.
Which makes sense. In the last five years especially, drag culture and, along with it, queer culture have infiltrated the “straight” markets, perhaps due to America’s recognition of the enterainment as a legit art form as well as the LGBTQ community’s activism for equality and civil rights.

All in the Family

At Heat, the show begins with stunning performances from local queens. Then the headliner, Alaska, takes the stage, captivating the entire room with her outrageous antics and outfits.

During the intermission, I have an opportunity to chat with Alaska in her dressing room. I ask her what she thought the biggest difference was between working with Lopez and other promoters.

“I think it’s very important to have it feel like it’s a family and it’s friends and it’s a community – so that’s lovely. It’s always those promoters who have longevity,” Alaska says. “It’s people who are respectful but also kind and warm and inviting and accommodating. So, I always have a really nice time with Rey, and everybody does because it’s a really light community atmosphere. I like that. It’s not just get ’em, take their money and move on. I feel like the promoters that have longevity are the ones that make it a family affair.” 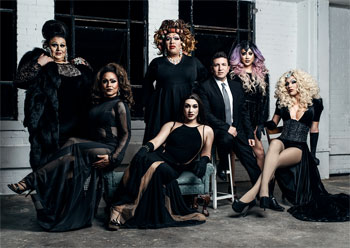 In February 2013, Lopez created Drag Me to Fame, a weekly competition where fans vote for their favorite drag performer and, at the end of the month, a winner is selected and given the chance to open for a Drag Race queen. Once a year, all the monthly winners are pitted against each other for a chance to be crowned an official Rey Lopez Entertainment Showgirl for a year.

“All the challenges they throw at you are to make you a better performer,” said Sephwhora, a Rey Lopez show girl (also a member of the drag-trio The Juniors before they broke up) who competed in Drag Me To Fame and came in second for the entire year. “I am who I am because of the competition.”

On top of building community through his shows, Lopez also co-owns Male B Wear, an underwear shop located on the Main Strip. He also was part of the cast of the Rocky Horror Show when it ran at the Woodlawn Theatre three years ago. Two years ago, Lopez produced the show and this year he’ll be producing the show again, featuring Drag Race alumni Ginger Minj, Milk, Laganja Estranja and Cynthia Lee Fontaine.

“I feel like I’ve made a lot of people happy bringing the RuPaul’s Drag Queen girls down,” Lopez said. “I care that people are happy… so to me, the production value of what I do, the girls being on stage, makes me feel like I’m in the arts. It’s come full circle.”

By the end of today, city crews will have completed the installation of a rainbow crosswalk at the corner of...