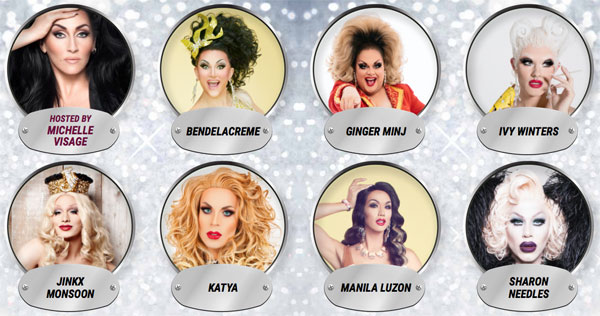 With the popularity of RuPaul’s Drag Race in recent years, it’s hard to believe the Battle of the Seasons tour is only in its third installment. Featuring a rotating cast of RPDR fan favorites from previous seasons (minus season 8), the tour has been stunning audiences across the world since kicking off in Belgium back in March.

In a statement, Michelle Visage, host of the Battle of the Seasons tour, and judge on RPDR had this to say: “This year we are back, and these bitches are bigger and badder than before! Get ready for the ULTIMATE RuPaul’s Drag Race experience from the minute you walk through the doors. It is a once in a lifetime extravaganza that you will NOT want to miss!”

Visage, a former member of the 90’s girl group Seduction, made headlines after stealing the spotlight with her own renditions of Madonna’s ‘Take a Bow’, and ‘Poor Unfortunate Souls’ from Disney’s The Little Mermaid.

The ‘Battle of the Seasons’ tour makes a stop at the Paramount Theatre on June 23. Visage will be joined onstage by Manila Luzon, Sharon Needles, Violet Chachki, Ginger Minj, Jinx Monsoon, Ivy Winters, Katya and BenDeLaCreme.

A line of t-shirts featuring the logos of all 30 NBA teams (including the San Antonio Spurs) rendered in rainbow...