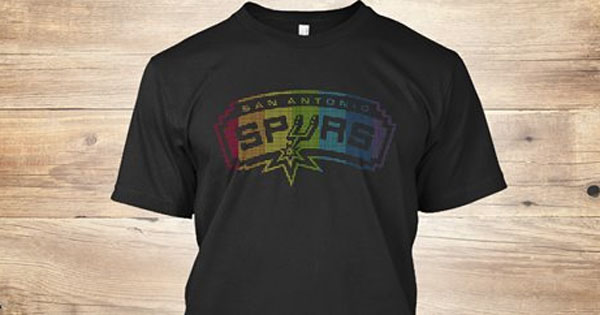 A line of t-shirts featuring the logos of all 30 NBA teams (including the San Antonio Spurs) rendered in rainbow colors are being sold online to benefit GLSEN (the Gay Lesbian and Straight Education Network).

In a statement, GLSEN’s Executive Director, Dr. Eliza Byard said on June 7, “Support from professional sports for LGBT people has been one of the biggest cultural developments of the past five years, and the NBA has consistently led the way. Thank you, NBA and Teespring, for this generous support, and for standing with your LGBT fans, LGBT youth, and GLSEN with these Pride-themed shirts.

“For LGBT fans and players alike, visibility and inclusion in the family of sports remains a key goal. The entire GLSEN family is proud of our longstanding partnership with the NBA, and excited about all of the work we are doing together to make K-12 physical education and athletics – and all of K-12 education – more inclusive and welcoming of LGBT students.”

According to Wikipedia, GLSEN “is an organization founded in 1990 in the United States that seeks to end discrimination, harassment, and bullying based on sexual orientation, gender identity and gender expression in K-12 schools.”

The tees are available only until Monday June 13. Use this link to purchase.

The rate of sexually transmitted infections remains high among gay and bisexual men in Bexar County according to statistics provided...