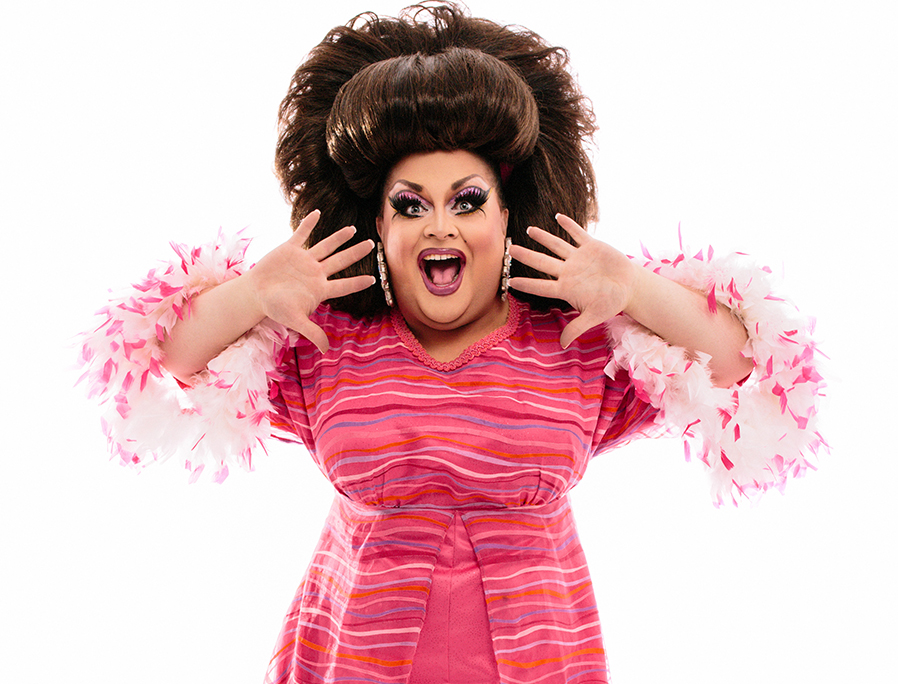 Fresh off her appearance on season seven of RuPaul’s Drag Race, Orlando’s Ginger Minj is starring as Dr. Frank-N-Furter in this year’s production of the Woodlawn Theatre’s The Rocky Horror Show. We spoke with Minj over the phone about her time on Drag Race, a new album in the works and how she plans to spend her time in San Antonio.

Do you think your experience in the theater is what helped you advance as far as you did in last season’s Drag Race?

I think it has a lot to do with the training that I got in musical theater. One thing that you always have to be is professional. [You’ve] got to push ahead; the show must go on no matter what. Even in my bad days on Drag Race, I knew that I had to push through or I was going home. Just like in regular life, there are good days, there are bad days, there are days when you don’t want to get out of bed and shave your face, but you realize that you have to because that’s the gig; that’s the job. It’s what you signed up for.

One of the most memorable moments from last season was a challenge where you had to reenact a scene from a classic John Waters film and ultimately John Waters himself selected you as the winner. What’s it like to have the approval of such a legendary figure in the entertainment world?

You know, that challenge was so life-changing for me. John Waters and Divine really kind of saved my life when I was younger. Coming from a little Southern Baptist, backwards town, I knew that I was different, and I was always being made fun of and put down for not being like every one else. And that was my window to the outside world: their movies. Between Pink Flamingos and Hairspray, I was able to go, “Oh my god, there is so much more than what is here in Leesburg! [I’ve] just got to hold on and push through it.” So to actually get, not only recognized by John Waters, who is my idol, but to be praised by him as well, it really put my life in perspective.

You released a new single, “Ooh Lala Lala,” over the summer. What’s next?

We’ve been working really hard on the new album. One thing that I was really adamant about going into it was: I don’t want to be like the other Drag Race girls. Not putting them down, because I love what they do, I love their music, but it’s all kind of schlocky, cheap, and gay dance-club kind of music. That’s great, but it’s not what I do. It’s not what I would excel at … We’ve been doing amazing songs. We have been doing a few duets with people who are important to me, who are my idols.

Anybody we would recognize?

I just did one with Margaret Cho and it was one of the funniest experiences of my life. She’s just this amazing open soul; she’s crazy. I just did one with Carnie Wilson from Wilson Philips who has become like one of my best friends; she and I have kind of the same life story. Its crazy how you relate to these people when you realize that they are just people too.

What are some musical influences on this album?

Well, I like to think that I’m a cross between Jennifer Holliday and Meatloaf; kind of a gospel-rock feel. And I wanted it to be something that everybody could relate to on some level but still kind of have that musical-theater vibe to it without being musical theater.

This year marks the 40th anniversary of The Rocky Horror Picture Show. Were you a fan of the film before getting this role?

Oh, Rocky Horror has been a huge part of my life — my entire life. I grew up watching the movie of course, and then when I was old enough, I started going to the “shadow casts” that they do and I thought it was really fun. Everybody could be themselves no matter what the hell they were. Then for the past seven years, I’ve been doing productions of it in Orlando. I’ve played Magenta; I’ve played Brad; and I’ve played Columbia. I think it’s a natural progression now to move into playing Frank.

I know you’ve played Hedwig in the past. Did that prepare you for this role in any way?

Absolutely. [Hedwig and the Angry Inch] I did for two years. I try to call myself, not an actor, but a reactor. I put myself in that moment and kind of relate to whatever I’m going through in my daily life. Especially when I did Hedwig, it was always changing, it was always a little different, and it was always very personal for me. Even though Rocky Horror is just an out-there, schlocky kind of show, I think that if you keep it grounded in reality, the absurdity is going to be even more over the top.

How is your Dr. Frank-N-Furter different?

I think my Frank is going to be a beast all unto itself. When I did Hedwig, I thought it was important to honor what John Cameron Mitchell had created and made so famous, but also to kind of make it my own because I’m not John Cameron Mitchell; I’m not Tim Curry; I’m not Sharon Needles. I need to adapt it and make it personal for me. What are your plans while you’re in San Antonio?

I’m going to go to the Alamo because I have to. I don’t know — I just want to immerse myself in the town and the culture and get to know everybody there a little bit more. The best part of being on tour with Drag Race is I’ve met people from all over the world who have become great friends and people I stay in contact with. Me being this small-town Southern boy, it’s great to make those connections.