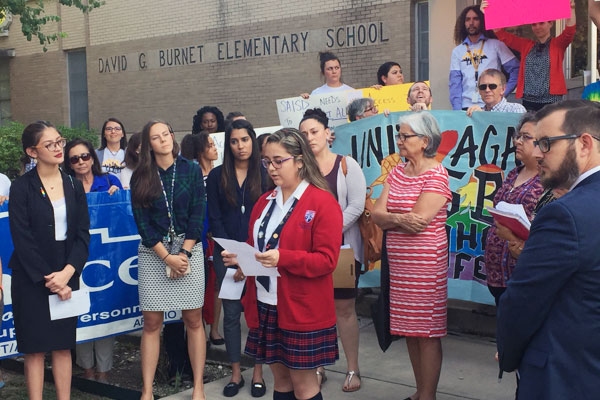 An SAISD student speaks out in support of DACA and LGBT students before Monday night's board meeting. (Photo: Alex Zielinski)

On August 21, the San Antonio Independent School District board updated district policy to include protections for students or teachers discriminated against for their “gender identity, gender expression, or sexual orientation.” But like a failed game of telephone, SAISD parents, anti-LGBT advocates, and conservative lobbyists showed up to SAISD’s Monday night board meeting to protest what they called a “bathroom bill.”

“I’m against this bathroom policy,” said Becky Thayer, a woman who waved a yellow sign reading “ONLY TWO GENDERS” while SAISD students and teachers thanked the board members for passing the ordinance during the meeting’s public comment section. “I don’t believe little boys should dress as little girls. Kids will get all confused.”

The board has indicated it has no intention of reopening the discussion over the six words they’ve added to the non-discrimination ordinance. And while Board President Patti Radle kicked off the lengthy meeting by explaining that the August vote only bans discrimination in hiring practices and improves anti-bullying rules for students — and has nothing to do with bathrooms — multiple members of the public went on to excoriate the board for letting men into “little girls” restrooms.

It’s a line ripped from the playbook of anti-LGBT lobbyists that swarmed the Texas Legislature last session to help pass the so-called “bathroom bill” — a failed piece of legislation that would have banned transgender public school kids from using the bathroom of the gender they identify as.

Of the 49 people who spoke in front of the board Tuesday, zero SAISD students, staff or teachers spoke out against the non-discrimination ordinance. Only one person who opposed it identified herself as a relative of a SAISD student. At least five said they came from out of town to protest the rule.

The hubbub over this already-passed ordinance largely overshadowed the major vote of the evening, one that also promises protections to vulnerable students.

Shortly after the public hearing section of the meeting wrapped, the board voted unanimously to pass a resolution to “seek protection” for students who are enrolled in the Deferred Action for Childhood Arrivals program, or DACA. Under DACA, these students (all who were brought to the U.S. before their sixteenth birthday) are protected from deportation, as long as they stay in school or are holding a steady job.

SAISD’s resolution is a direct response to the White House’s recent threat to scratch DACA protections if Congress doesn’t “fix it” in six months.

“The board recognizes that the continued residence and education of all students in the District benefits our society as a whole,” the resolution reads. “[The board] urges…the United States Congress to pass legislation within the next six months to ensure that those students arriving to the United States as children … have the opportunities to continue residing in the United States, pursue higher education, gain legal status, and eventually become citizens.”

Prior to the board vote, members of the public asked the board to be more specific in its sweeping support of the district’s DACA students, like mandating that all teachers take a course to understand the rights and legal protections their DACA students have, or barring federal immigration agents from interacting with school police.

Barbie Hurtado, a community organizer for RAICES, told the board that when she arrived in San Antonio at age 11 — fleeing domestic violence in Mexico —she never felt that her SAISD school was a safe place.

“I was bullied. Kids threatened to call immigration to deport me back to the very violence that I fled and I believed them. I was never reassured by school officials that the immigration would not come and get me,” she said. “I firmly believe that if that information was available to my teachers, they would have been better equipped to help me. I can only imagine that immigrant students in schools today feel what I felt years ago.”

It’s unknown if the board plans on putting more concrete policies into place.

Save the Dates: End of Summer Brings Autumn Events

The end of summer marks the beginning of fundraising season for organizations in San Antonio’s LGBT community. While events are...