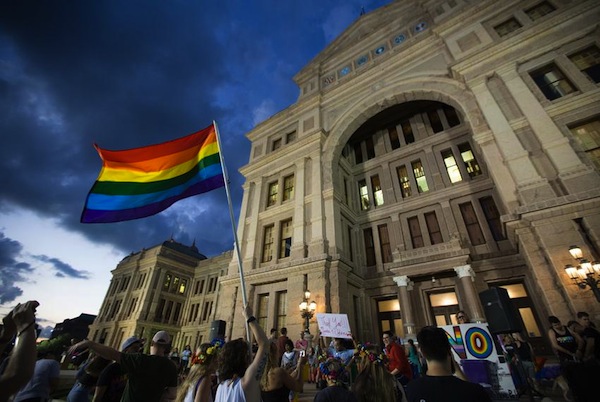 Members of Austin's LGBTQ community gathered on the steps of the Texas Capitol in 2017 to celebrate the anniversary of the 1969 Stonewall riots. (Photo: Austin Price for The Texas Tribune)

A new ruling from the U.S. Supreme Court makes clear that it violates federal law to fire an employee on the basis of gender identity or sexual orientation. Now Texas lawmakers want to guarantee similar protections for LGBTQ Texans in housing, health care and other spheres.

by Emma Platoff and Cassandra Pollock, The Texas Tribune

LGBTQ Texans marked a major victory Monday when the U.S. Supreme Court ruled that federal civil rights law prevents employment discrimination on the basis of sexual orientation or gender identity. But in Texas, which did not have such workplace safeguards, LGBTQ lawmakers and advocates say they are far from done fighting for other essential protections.

Employment discrimination protections, they say, are necessary but not sufficient for advancing the equal treatment of LGBTQ Texans. Thanks to Monday’s ruling, Texans can no longer be fired for their sexual orientation or gender identity, but there is no state law explicitly preventing landlords from refusing to rent homes to LGBTQ Texans, for example.

Members of the Texas House LGBTQ Caucus are setting their sights on a comprehensive set of nondiscrimination protections that would codify the employment protections in state law, as well as guarantee LGBTQ Texans equal access to housing, health care and other public accomodations.

It will not be an easy bill to pass.

The fight for LGBTQ rights has been a long and arduous one in Republican-dominated Texas. Efforts to expand workplace protections have floundered at the state Capitol, though some cities, like Austin and Dallas, have passed ordinances prohibiting discrimination against LGBTQ people.

But proponents of a state law said they’re hopeful about progress next year in part because they have secured the support of two of the Legislature’s more moderate Republicans.

González announced in May that she would spearhead the fight for a comprehensive nondiscrimination bill during the next regular legislative session in 2021 with Republican state Reps. Sarah Davis of West University Place and Todd Hunter of Corpus Christi.

“We rolled it out early to start the conversation,” González said.

In pushing for comprehensive nondiscrimination protections, LGBTQ lawmakers and their allies are also making an economic case. Big businesses like Amazon and Google have been major advocates for LGBTQ Texans over the last few years, telling lawmakers that to attract the best talent to their Texas offices, they need to guarantee workers equal rights in their communities.

“It is the business community’s voice that has been one of the loudest and strongest advocates for the LGBT community over the years,” said Tina Cannon, executive director of the Austin LGBT Chamber of Commerce.

Still, advocates have acknowledged that Monday’s ruling, while exhilirating the LGBTQ community, may also stir up opposition.

“I do think this is going to galvanize the folks who don’t want us to be at the same level,” Shelly Skeen, a senior attorney with the LGBTQ rights group Lambda Legal, said during a virtual briefing after Monday’s ruling. “So we got even more work to do, but I think we got some great momentum behind us.”

LGBTQ Caucus members have already made major progress since 2017, when LGBTQ advocates spent much of the legislative session playing defense as they fought back a controversial “bathroom bill” that would have limited transgender Texans’ access to certain public spaces. It was championed by Lt. Gov. Dan Patrick and hardline conservative groups.

That bill didn’t return in 2019, when the number of out lawmakers reached an all-time high and sparked the founding of an LGBTQ Caucus in the 150-member lower chamber. Advocates marked more progress than they had seen in years. But even that meant many bills — like a proposal to ban the controversial practice of conversion therapy for minors — were heard once in a committee, but never called up for a full vote before the Texas House or Senate.

It’s unclear whether that momentum will carry into efforts during the next regular legislative session in 2021 — and it may depend on Democrats’ success in this fall’s elections. While Republicans hold majorities in both chambers, Democrats are effectively nine seats away from gaining control of the House after flipping a dozen of them in 2018.

Advocates of the bill are leaning heavily on the bipartisan support for the legislation, a nod to the challenges such a proposal could face in Patrick’s conservative Senate and if Republicans maintain control of the House after November.

“We’re not under any illusion that it’s not going to be a much harder hill to climb in the Senate,” Davis, a House Republican supporting the proposal, told the Tribune. “When Dan Patrick makes bathroom bills a priority, that says a lot about how he feels about the transgender community.”

González said she plans to work with other state lawmakers on language for the legislation “that has the best chance of passing the Texas House.”

Texas Values President Jonathan Saenz, the hardline social conservative who helped push the “bathroom bill” during the 2017 legislative session, called on elected officials to address the high court ruling, which he claimed “could jeopardize long-standing religious liberty protections for churches and nonprofits.”

Some of the Legislature’s more hardline Republicans have also signaled that Monday’s ruling could prompt their faction of the party to push religious liberty proposals next session.

Proposals billed as protections of religious liberty, advocates say, are often disguised attempts to erode the rights of LGBTQ Texans — for example, protecting a religious employer’s ability to fire a gay worker, or a doctor’s choice to refuse treatment to a transgender patient.

Jessica Shortall, managing director of Texas Competes, a coalition of businesses that make “the economy case for equality,” said the businesses in her coalition will continue to push for nondiscrimination protections in housing and other public spaces. Inclusive businesses want to guarantee their employees equal protections outside the workplace as well, she said.

A recent study by Ray Perryman, a prominent Texas economist, found that passing a comprehensive nondiscrimination act could bring Texas hundreds of thousands of new jobs and billions of dollars in new business activity, much of it coming from the technology and tourism sectors.

The Supreme Court ruling “stands up for the golden rule,” said Jeff Moseley, the president and CEO of the Texas Association of Business.

“And it just says that workers that are hired, retained, and promoted based on their talents and skills and work ethic, and not on their sexual orientation…” he said. “It’s going to definitely help the Texas economy, grow more jobs and paychecks, and allow the Texans that are working here to work without fear of any discrimination.”

Meena Venkataramanan contributed to this report. The Texas Tribune is a nonpartisan, nonprofit media organization that informs Texans — and engages with them – about public policy, politics, government and statewide issues.

The ruling carries special power in the Lone Star State, which is among those that doesn't extend protections to workers...