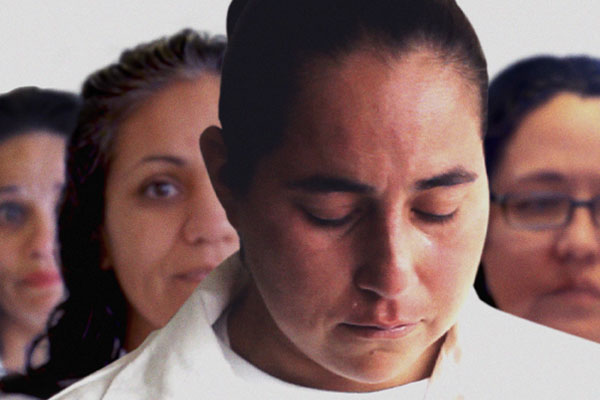 "Southwest of Salem: The Story of the San Antonio Four" will have its television debut on the Investigative Discovery Channel in October. (Movie poster detail via SouthwestOfSalem.com)

The dramatic case of four San Antonio women who say they were wrongly accused of gang-raping two children in the mid-1990s will air before a national TV audience this fall.

Southwest of Salem: The Story of the San Antonio Four premiered at the Tribeca film festival last year to rave reviews, drawing national attention to the problematic prosecution of Elizabeth Ramirez, Cassandra Rivera, Kristie Mayhugh and Anna Vasquez, all of whom were handed lengthy prison sentences after being convicted of savagely assaulting Ramirez’s young niece in a series of bizarre rituals. The women, who each lost at trial after turning down plea deals of 10 years probation, insist the abuse never happened; lawyers who have since examined the case say the women never should have been prosecuted, let alone convicted, in the first place.

While the documentary is slated for limited release in U.S. theaters September 14, the Investigative Discovery (ID) channel last week announced that it has obtained the television premiere rights to the film. The channel says it plans to air the documentary in October as part of its independent documentary series, meaning the women will get a nationally televised audience just as the state’s highest criminal court decides what to do with their case.

When it returns from summer recess, the Texas Court of Criminal Appeals will decide whether it agrees with a lower court’s decision to send the women’s case back to trial. Last year, Senior District Judge Pat Priest heard testimony that faulty forensic analysis helped convict the women. He also heard from one of the victims, Stephanie Limon, who recanted to Southwest of Salem director Deborah Esquenazi years prior. On camera, the woman nervously read her prepared recantation from a sheet of paper, saying she lied about the allegations against her aunt and her friends. “I was threatened and I was told that if I did tell the truth that I would end up in prison, taken away, and even get my ass beat,” she told Esquenazi.

In his opinion earlier this year, Judge Priest admitted “the newly discovered evidence severely ‘muddies the water,’” but doesn’t necessarily establish the women’s innocence. He recommended the women get a new trial.

Keith Hampton, one of the attorneys representing the women in their appeals, filed objections with the court shortly after the recommendation was made, saying the women should be found actually innocent and eligible for compensation from the state for time wrongly spent behind bars (the women were released from prison in 2012). “The ‘water’ in this case is not muddy,” Hampton wrote in a court filing. “It is clarified by a detailed and credible recantation, extensive expert testimony, strong statistical evidence from multiple and repeated polygraph examinations, and credible testimony from the four accused women.”

Hampton says best-case-scenario for the women at this point would be for the CCA to accept the case so Hampton and Mike Ware with the Innocence Project of Texas can argue for the women’s actual innocence. “We just want the court to file and set it at this point,” Hampton said. “These women are actually innocent. They don’t deserve a retrial hanging over their head. They deserve compensation for all those years spent in a prison cell.”

The case of the San Antonio Four, as they’ve come to be called, seems to mean different things to different people. Some cite statements by the prosecutor about the women’s “homosexual relationships” as sign four lesbians never had a chance at beating charges they molested little girls in the much more conservative San Antonio of the mid-90s (prosecutors who handled the case at the time have called the notion “offensive”).

Others see the case as the last gasp of the so-called “ritual satanic abuse” panic of the 1980s and 90s; the doctor who examined the girls after their outcry, Dr. Nancy Kellogg, wrote in her exam notes that the abuse “could be satanic-related.” In fact, Hampton has represented other such cases in Texas that he calls “a precursor” to the type of prosecution that unfolded in the case of the San Antonio Four. “This was an era before child advocacy centers and before people really understood what suggestive interviews of children looked like,” Hampton told us.

When you consider the resurgence in popularity of the true crime drama, as evidenced by the Serial podcast or Netflix’s Making a Murderer, it’s no wonder Esquenazi’s film has made a splash. In many ways, her years-long project came to fruition at just the right time.

Michael Barajas is editor of the San Antonio Current.

‘Women of Ill Repute: REFUTE!’ Returns to Guadalupe After 15 Years

On Saturday July 23, the Guadalupe Cultural Arts Center will present Women of Ill Repute: REFUTE!, a play consisting of...