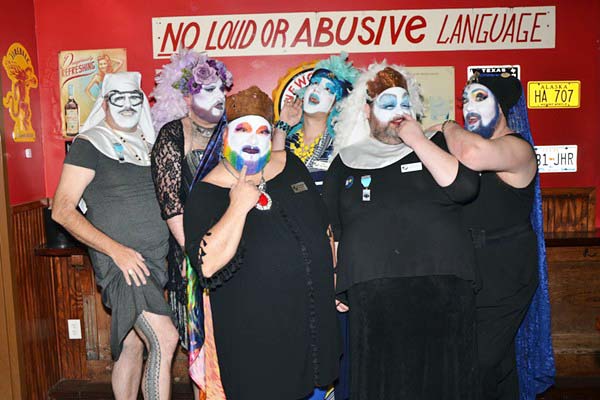 Musical-theater icons Richard Rodgers and Oscar Hammerstein are either laughing or rolling in their graves over their unwitting role in the bizarre origin story of the Sisters of Perpetual Indulgence — a troupe of gender-blending “nuns” that emerged in 1970s-era San Francisco after donning habits procured from an Iowa convent for an unconventional production of The Sound of Music.

Outlined in the “Sistory” section of the group’s website, founding members Sister Vicious Power Hungry Bitch, Reverend Mother, Missionary Position and Hysterectoria-Agnes made their first appearance together on Easter weekend 1979, marching through the gay-friendly streets of the Castro district armed with “a machine gun (for protection)” and then, naturally, to a nude beach and a softball game to perform a well received pompom routine.

Rising from a counterculture mecca informed by everything from the Summer of Love and San Francisco’s gay groundswell to outré theatrical troupes like the Cockettes and the Angels of Light, the Sisters of Perpetual Indulgence set out to further challenge conformity with a visually arresting mélange of bearded drag, camp and Catholic satire. Beyond adopting habits, wimples and conceptual “ear brassieres,” the founding Sisters established themselves as benevolent beings on a mission “to promulgate universal joy and expiate stigmatic guilt.”

While earning press and controversy alike, they began serving the needs of the San Francisco community by hosting early AIDS fundraisers and distributing educational yet humorous pamphlets preaching the virtues of safe sex. As their popularity and visibility rose in California, spinoffs began popping up — starting with Sydney, Australia, and Toronto, Canada, and slowly but surely spreading across the United States and the world. Although under the umbrella of the Motherhouse in San Francisco, these 70-plus satellite orders are independent entities that share similar missions and goals but can customize their own rules and dress codes while addressing the specific needs of their local communities.

Formed in 2011, the nonprofit San Antonio Sisters of Perpetual Indulgence, Abbey of the Alamo, bills itself as “a modern, communal order of 21st-century nuns dedicated to community service, fundraising, outreach, advocacy, education for safer sex awareness and to promoting human rights, respect for diversity and spiritual enlightenment.” Currently comprising 11 active members, the local chapter employs liberal doses of “humor and irreverent wit to expose the forces of bigotry, complacency and guilt that chain the human spirit.”

In an effort to better understand the Abbey of the Alamo’s endeavors, accomplishments and inner workings, we sat down with Fully Professed Members Sister Skharlott de la Noche (Abbess), Sister Dottie Bair (Secretary) and Sister Katya Klyzm on a Friday night before they went out to distribute “Bliss Kits” in bars on the Main Strip.

What can you tell me about the hierarchy of the order?

Sister Skharlott: Well, you start off as an Aspirant and you just kind of hang out and get to know the group, see what we’re all about. As Sister Betty put it to me when I first joined, it’s the butt-sniffing phase, like dogs checking each other out. Then when you decide you want to join, you become a Postulant, and you work, and that’s where you wear the grey dress, and you’re a little demure. It’s basically the observation phase. Then you do a Postulant Report and you get interviewed by the Fully Professed Members and they vote whether you move up or not. Then you move up to Novice — if you move up. And that’s a little bit more [formal]. You wear a black dress, you can add some color to your face, and you’re allowed to speak. Postulants can’t speak on behalf of the house — they have white lips. As a Novice, you’re still learning how to be a Sister and what we’re all about. And then you do a Novice Project, which can be a fundraiser, a community benefit or something like that. And then after that, if your Big Sister and the Mistress and Novices decide you’re ready to move up, then you’re interviewed again, and you’re voted whether you move up to Fully Professed Sister.

Tell us a bit about your mission.

Sister Katya: I typically explain that it’s to “promulgate universal joy and expiate stigmatic guilt,” but I [simplify it] a bit and say that it’s to spread joy and end guilt. We’re trying to help you to feel happy and see [that] you can be as ridiculous as we are when we go out, or you can be whoever you are.

Sister Dottie: That’s exactly the core of the mission. … We spend so much time as queer people being told we’re not enough. We’re not good enough, we’re not worthy enough, we’re not something enough. My mission, every single person I meet, I need them to know [that] they are perfect, they are amazing and they are more than enough. They are amazing. They are loved and worthy and all of those things. Because we grow up internalizing those messages, and I really just want to make sure that people know, when you look in your mirror, you are looking at somebody that is not just enough, you’re fucking perfect.

So, beyond that positivity, what about the activism?

Sister Dottie: There is activism involved. We did the Women’s March, we did the migrant children protest. You have to tread kind of a fine line when you’re a 501(c)(3). You can advocate against policies, you can advocate against laws [but] you can’t advocate for or against specific parties or people. I actually did a big voter registration drive and during it, people kept trying to engage me [about political parties]. When you’re looking at me like this, I can’t talk about party — period. All I care about is that you go vote. Like, just vote. [San Antonio’s] turnouts are pathetic. When you talk to me and I don’t look like this, I’m more than happy to share those views with you. But as a [nonprofit] you can’t cross that line.

Sister Skharlott: Not only do we participate in other activism, but Sister Dottie here has Just One Night to help raise money and awareness for homeless youth. We’ve also got a pretty robust HIV awareness [program]. We pass out Bliss Kits with condoms and lube, and we all [encourage] people to go get tested. We pass them out at First Friday and in the bars [on the Main Strip]. I always have a big bag of them in my purse.

Sister Dottie: Just One Night was originally my Novice Project. As I came up through the ranks, I knew it would be something I would do every year. I used to be a 16-year-old living on the streets, so part of my mission as a Sister is helping homeless youth. It just absolutely is. Because I know what those kids go through. So, it’s an event that I do every year and am trying to make a citywide event. You know how people sign up for a bike ride or a 5K, they raise funds and then they go run. So, I ask them to sign up, raise funds and then come sleep in a city park overnight as a way to start a conversation about homelessness. We just had its second year and raised $8,500 for Stand Up for Kids and Pride Center. 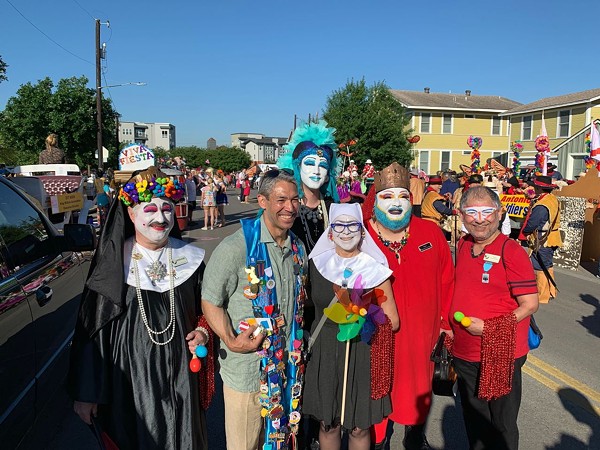 How often do you all get together to do outreach?

Sister Katya: All of us, it’s not that often — with everyone’s schedules, it can be tough. So, it’s a lot more [often] that small groups of us will go when [we] can. Wherever you feel called, you go there. We’re drawn to that kind of work.

Do you ever divulge your real names?

Sister Dottie: I actually divulge my name all the time. I’m actually on the Mayor’s LGBTQ Advisory Committee. And, so, they know my name forwards, backwards, left and right. It’s all over in print. And I’m very out at work as a Sister as well. They were actually trying to get me to come into work the other day like this. And I’m an engineer at Rackspace — so big computer nerd by day.

How long does it take to get all of this on?

Sister Katya: It varies. I think I take the longest, I’m pretty sure, of everyone. But for me, I have to listen to my music, and have this space for getting ready to go out to do something that’s not your everyday thing. So, it takes me about an hour and a half to two hours. I’m a little bit perfectionistic.

Sister Skharlott: I wanna say tonight took me about an hour and a half. I’m like Katya, I play certain music, have a certain table. You get yourself in the zone. And some days, you can be in the worst mood ever, but you start putting on the whiteface and my mood will change like that. It’s the weirdest thing. It’s kind of an epiphany, maybe halfway through your journey. You just put it on, and you start changing. Your personality changes a little bit, your thought process changes. Sometimes you truly do become different.

Sister Dottie: There are days when you do not want to put on a face. Like, when I’ve been at work all day, I’m tired. I just want to play video games and forget the world. And there’s a moment when you’re putting on the whiteface that — I tell people all the time, that Dottie isn’t me. Dottie is a manifestation of a need inside of the community. And there’s a moment where that happens. And suddenly it’s no longer about me. It’s never been about me. It’s about all the people out here that need Dottie.

And what is that deepest need? For people to feel better about being themselves?

Sister Dottie: I would say, at the core of it, to know that you’re accepted, that you’re of value, that you’re loved. I think most human beings walk around honestly believing that they’re not worthy of love. And by God, I’ll tell a complete stranger. I’ll look them in the eyes and tell them I love them. Because we don’t say it enough and we don’t let people know enough.

What’s the typical reaction to your look as a house?

Sister Katya: People are always very excited to see us, because we don’t wear the traditional nun’s habit and all that stuff. Either happy or “What are you?” They need to know what we are, and we can talk about that — that’s fine too. But usually they’re happy and want to laugh because we’re ridiculous.

Are there any barriers as to who can join?

Sister Dottie: We are inclusive of everybody, every sexuality, every gender identity. If you feel the mission, you can join.

Biggest Celebration Ever to Commemorate Pride in San Antonio

Organizers and volunteers are making the final preparations for one of the biggest Pride celebrations in San Antonio's history, one...