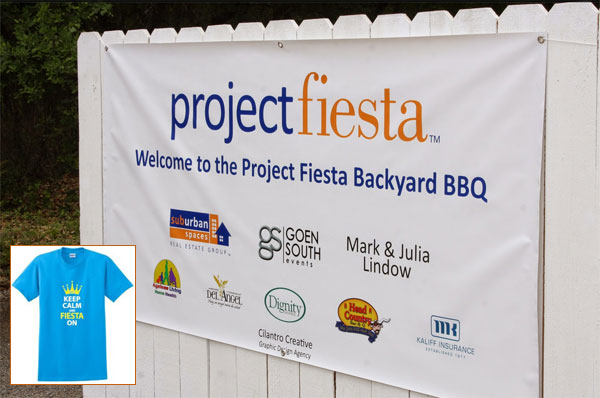 The party banner for the 2013 Project Fiesta barbecue. Each year, Project Fiesta sells t-shirts to raise money for local charities. Inset photo is this year's design.

Chad Nall and Brian Lopez-Rosa, proprietors of Suburban Spaces Real Estate, moved to San Antonio from Ohio almost 10 ago and immediately fell in love with the city.

The couple says they had the good fortune to meet an extraordinary group of people who have become family. Now for the sixth year, the couple’s non-profit, Project Fiesta, is selling t-shirts to raise money for a local charity. This year, the beneficiary is the San Antonio Humane Society.

The t-shirts have been designed specifically to commemorate Fiesta San Antonio while also raising money for an organization that every year shelters and rehabilitates approximately 5,000 animals which have been abused or abandoned and readies them for adoption.

Suburban Spaces, along with a group of sponsors, underwrites the cost of printing the t-shirts so that all of the proceeds go to the Humane Society. The shirts come in a variety of colors, styles and sizes. This year, the front of the shirts read, “Keep Calm and Fiesta On.”

The idea for the t-shirt sale arose after a friend of Lopez-Rosa and Nall’s died. On their web site they write:

Our inspiration for Project Fiesta came in 2008 when a dear friend of ours passed away from lymphoma. During Fiesta 2009, we decided to design a t-shirt in remembrance and solidarity for all the lives he had touched. All of the proceeds were donated to the Leukemia and Lymphoma Society here locally in San Antonio. After seeing the huge success of this project and the kind generosity of all involved, we knew we could make a difference for a deserving local charity every year. Each year we continue to grow and pass along the same spirit that started this project many years ago.

Everyone who buys a t-shirt receives an invitation to the Project Fiesta Backyard BBQ on Sunday, April 19. The family-friendly event includes a small street parade, a silent auction and plenty of food and beverages.

Project Fiesta t-shirts are $20 and are being sold by advance purchase until noon on Sunday, March 22. They may be ordered at ProjectFiesta.com. The shirts can be picked up at the barbecue or at Suburban Spaces, 6202 West Ave. in San Antonio beginning Monday, April 13.

Responding to bigotry with style and grace

Well, the holidays are long gone, and I’d like to point out the obvious now that the threat of spoilers...