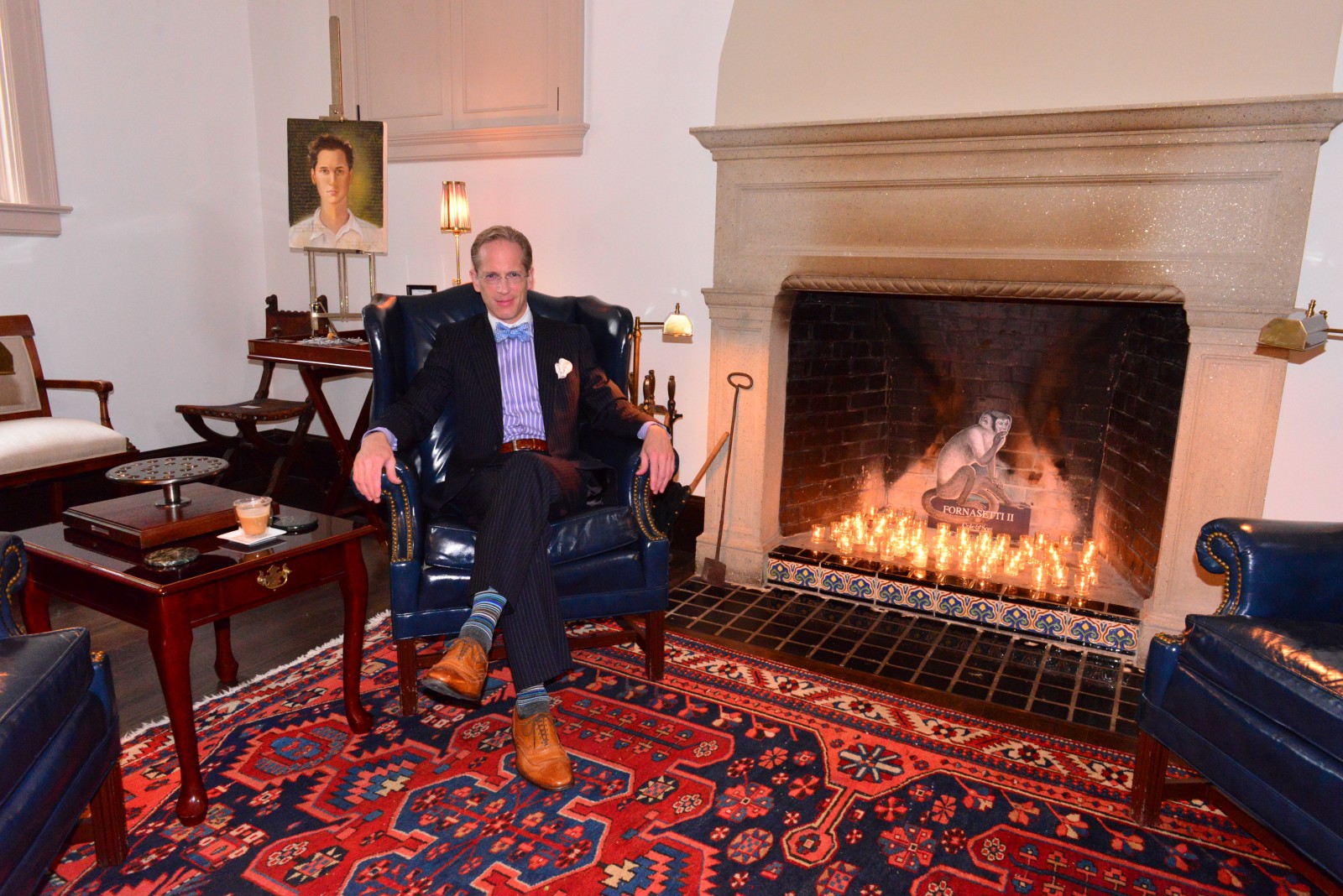 Leland Stone photographed at the Roosevelt Library by Page Graham

Traveling down South St. Mary’s Street through the railroad underpass, one might notice what appears to be a vintage office building sitting on a large triangle of land across from Roosevelt Park. On the corner of the lot sits a sign proclaiming “Stone Standard.”

If one takes a detour around to the other side, the structure reveals its Spanish Colonial Revival facade. But the building is still an enigma from the street. Approaching the front of the building, one notices a crest similar to that of the City of San Antonio, and there is a prominent marble cornerstone. Aha, finally a clue! “Public Library, Roosevelt Park Branch, Erected A.D. 1929.” Walking through the front door is like passing through a portal. It is like a place out of time (think Society for Creative Anachronism meets The League of Extraordinary Gentlemen). Directly ahead is a large hall with 14-foot ceilings and a massive dining table. Servants wearing crisp, white dress shirts and black pinstriped vests unobtrusively go about their tasks; neatly arranged vintage hardware and plumbing fixtures line the walls. Down the main hall, there is an alcove-like room outfitted with a one-chair barbershop and shoeshine stand. To each side of the large foyer are two rooms. To the left, one can see a Steinway grand piano, bookshelves, and a table topped with architectural curiosities and vintage books. In the corner sits a men’s fragrance bar. About the only thing missing here is Bach cantatas wafting softly through the air.

Out of the office to the right emerges a tall, bespectacled gentleman, nattily attired with a blue bow tie, purple shirt with bold white stripes, a dark pinstripe suit (with pocket square, of course), and perfectly polished brown oxford dress shoes. Fancy socks? Of course.

“Hello, I’m Leland Stone. Pleased to meet you,” he says.

What is this place?

Obviously, it isn’t a library any more, is it? As it turns out, the Roosevelt Library was one of the first two branch libraries built in San Antonio, the other being the San Pedro Park Library. Both were opened within weeks of one another, during a period when branch libraries were being built in parks. The Roosevelt Library was designed by architect John Marriott, who also designed the Carnegie Library in Columbus, Ohio. The architecture is inspired by the Columbian Exposition at 1893 Chicago World’s Fair, perhaps the ultimate expression of the Spanish Colonial Revival movement. In San Antonio, this design fits neatly into the fabric of our architectural milieu.

So how did the Roosevelt Library end up across the street from Roosevelt Park? Actually, it didn’t. When the library opened in 1929, South St. Mary’s Street continued straight south across the railroad tracks, where it became Roosevelt Avenue. There was no railroad underpass at that time (it was completed in 1938). In actuality, the street that bisects the Library from the park was originally called “Underpass Street.” Yes, it’s a confusing mess. Going further back in time, according to Stone, there were at least two acequias on the large property adjacent to the library. He also claims that, at one point, what is now Roosevelt Avenue itself was an acequia serving Mission Concepción. The Catholic Padres would use the acequias as a mode of transportation, employing boats narrow enough to navigate the small channels.

Since this land has been bisected by two side streets with the advent of Underpass Street, the three properties are called the “Roosevelt Islands.” The biggest island is home to the library; the others are too small to be anything but green spaces.

Stone recounts that when the City Police and Firefighters Pension Fund owned the property, archaeologist Kay Hindes mistakenly thought the land was owned by the City of San Antonio  and initiated a dig at the site. Work had begun, complete with a backhoe to get things started, when someone from the Pension Fund came out to ask her what she was doing. Oops! Stone has retained a collection of vintage bottles excavated from the site before work stopped. A visit to the still-open San Pedro Park Library provides some clues as to what Roosevelt Library must have been like in its day: small, clean and tidy with everything in its place … one might almost call it intimate.

Sadly, the Roosevelt Library was closed in 1968 in favor of a “new, improved” facility. For a few years, it was utilized for nondescript functions, but was ultimately sold to the Pension Fund in the late 1970s. By 1980, the Pension Fund had thoroughly updated the building, digging out a basement, installing HVAC and a rather unfortunate-looking semicircular rear addition, with a kitchen and other functional spaces included therein. That is what one sees from the street, including a set of modern office doors at street level.

It was functional and structurally preserved, but the interior lacked character. Enter our protagonist, Leland Stone.

The Pension Fund moved out of the building three years before Stone purchased it in September 2013. His goal was to restore the interior to its original glory — which he has achieved and then some. But, then, what to do with a space like this? The primary focus of the building is to serve as the offices of Stone Standard, a high-end, bespoke hardware and plumbing fixture business. He follows in the footsteps of his great-great-grandfather, Joseph Deutz, Jr., who ran a hardware business in the 1850s.

According to Stone, he represents practically every vendor in the business. Many of the fixtures he sells are based upon centuries-old designs, and the molds used to make them are also antique. Basically, once a mold is made it can be used indefinitely. But if one wants to end a production run, it’s time to “break the mold.” Speaking of breaking the mold, that’s something Stone — who is currently in a relationship with Neil Schneuker, a Special Assistant to Mayor Ivy Taylor — does with both his dapper fashion sense (a rarity in our ultra-casual city) and his desire to create a truly unique social milieu. Stone originally envisioned the space to be used for events, some corporate, but primarily for nonprofits, such as the Institute of Classical Architecture and Art (ICAA), of which Stone is an active member. Last year, he hosted a holiday party for ICAA, featuring a Christmas tree festooned with vintage architectural molds. Roosevelt Library has also hosted events for Musical Bridges Around the World and Opera Piccola of San Antonio. In addition, the basement space has been used as an art gallery. Otherwise, the basement is utilized as an extension of the showroom, with plumbing fixtures displayed on pedestals.

Aside from that, Stone has created a nonprofit under the name Roosevelt Library, intending to develop a museum of architectural ornament. He stays busy collecting books and artifacts to add to the collection and also hosts architecture-related events featuring vendors from his rarefied world of high-end hardware. One of Stone’s signature initiatives right now is the Roosevelt Library Social Club. An evolution of his popular Barber Shop evenings (held every other Monday), the Social Club is intended “to reinterpret the English gentleman’s club for San Antonio,” Stone says. “It is an alternative to stuffy private clubs for those who want somewhere to meet, relax and entertain guests.” (The club is open to both men and women.) Stone has developed an eclectic list of perks that come with Social Club membership. The linchpin is still the every-other-Monday receptions with appetizers and beverages. Why not have a nosh and a drink while waiting for your haircut or shoe shine? But, beyond that, there are a bevy of services, including a liquor vault and wine locker, complete with bespoke leather tags bearing your initials and the Roosevelt Library logo. Carbon-fiber guest passes are served up to you at a rate of four per quarter.

Not enough? Perhaps you would enjoy a prix-fixe dinner for you and your friends or colleagues. Or perhaps a private luncheon catered from by Southtown restaurant and served on bone china with silverware and linen napkins. Members can even schedule a hand-sponge car wash. Another new event is the Roosevelt Library Film Series, hosted by Katy Silva and Juan Leon, a young couple who have quickly become part of the local scene. Once a month, they will present a film featuring a prominent jazz musician. Drinks, appetizers and dinners are provided. Stone assures me the food is served in edible portions — no fussing with a knife and fork during the screening.

As we were concluding our visit, I notice the table in the middle of the south wing is also a billiard table. He removes one of the leaves to reveal a very fine green felt surface. Stone indicates that it was actually a snooker table, evidenced by the small pockets. When I tell him that my first job as a youth in Canada was cleaning a pool hall with four snooker tables, his eyes get wide. I then explain the basic rules of snooker and what he would need to obtain to start using it. So, maybe one day soon, I will join you at the Library, where I will instruct you on the finer points of playing snooker. A report published on August 22 in the San Antonio Express-News reveals there were 777 claims of bullying and harassment...