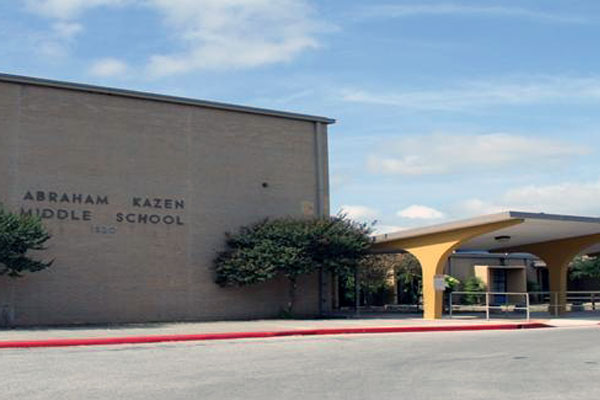 According to research by the San Antonio Express-News, Kazen Middle School in the South San Antonio ISD had the highest number of bullying complaints during the 2014-2015 school year. (Photo: SouthSanISD.net)

A report published on August 22 in the San Antonio Express-News reveals there were 777 claims of bullying and harassment in San Antonio area schools during the 2014-2015 school year.

The list was compiled from information the Express-News obtained under the Texas open records law. Seventeen school districts representing almost 200 schools were tallied.

While bullying in schools is not a new phenomenon, the issue has come to the forefront with the rise of social media.

Children can be the targets of bullying for a variety of reasons but LGBT youth or those perceived as LGBT are at an increased risk of being bullied according the to U.S. Department of Health & Human Services website StopBullying.gov. “It is important to build a safe environment for all youth, whether they are straight or LGBT. All youth can thrive when they feel supported,” the website urges.

In San Antonio, the issue of school bullying galvanized the community last year when David Molak, a student at Alamo Heights High School, committed suicide after being bullied on social media over his physical appearance.

At the same time, another student, Matt Vasquez who attends Antonian College Preparatory High School, was being bullied anonymously and relentlessly on Twitter and Instagram after he lost his hair while undergoing chemotherapy for lymphoma. One particular rant urged the teen to kill himself.

The plight of these two students prompted state Senator Jose Menendez to announce his plan to introduce an anti-bullying bill, David’s Law, in the next session of the State Legislature. “Our statewide bullying and harassment policies need to be overhauled and updated,” Menendez told KSAT-TV.

Menendez says under current laws, bullying is defined as only occurring on school property. However, now that most student have cellphones, the harassment can continue off-campus.

Menendez has also organized community workshops to address the topic of how to prevent cyberbulling. “I will work with families, school administrators, law enforcement, and others to ensure our schools have the tools they need to keep our students safe and protected from cyberbullying. No student should be afraid to attend class because they were harassed online,” he wrote in an email announcement.

Originally published in the San Antonio Current. A federal judge in Fort Worth ruled late Sunday that conservative states that...