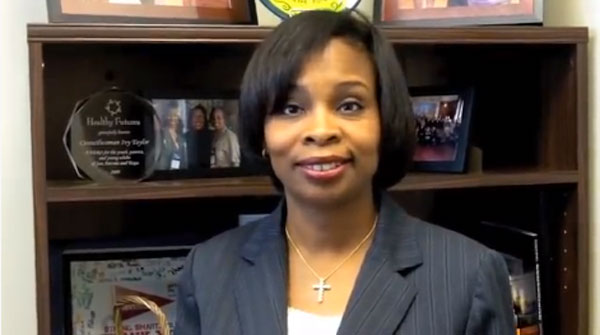 Mayor Ivy R. Taylor is drawing heavy criticism on social media after she said the city's nondiscrimination ordinance was a "waste of time."

Social media lit up with ire for Mayor Ivy R. Taylor on April 20 after the San Antonio Express-News reported she told parishioners at a mayoral candidate forum at Rev. John Hagee’s Cornerstone Church that the nondiscrimination ordinance was a “waste of time.”

“Mayor Ivy Taylor may have won points from voters at Cornerstone Church Sunday when she disparaged the city’s non-discrimination ordinance, but now others are taking her to task on Twitter,” wrote Express-News reporter Josh Baugh.

“Taylor told the hundreds gathered in the church that she voted her conscience on Sept. 5, 2013, when she was one of three council members who opposed the measure. ‘I did not feel we should have even been debating that issue,’ Taylor told the Sunday crowd. ‘I thought it was a waste of time.’ Those comments are haunting her now on social media,” Baugh reported.

The mayor went on to tell the crowd at the Cornerstone Church:

“We should have been focusing on those critical issues that you’re concerned about — streets and roads, and police and fire, libraries and parks. There was no way that we in those council chambers could change hearts of men, and what I felt I was being asked to do was provide tacit approval to something I didn’t feel comfortable with, and to also demand that people who do business with the city do that same thing. And so I voted ‘no,’ I voted my conscience and I stand behind my vote.

In recent weeks, Out In SA has reported how Taylor snubbed the Stonewall Democrats endorsement forum; how she said the nondiscrimination ordinance was a political stunt; how she was booed at a candidate forum after blaming advocates of the NDO for not leading efforts to propose enforcement mechanisms; how she hates “political correctness.”

Taylor also has refused to support a local control resolution, which won majority support in the City Council last week, because it mentioned the NDO.

Express-News columnist Brian Chasnoff reported that members of the mayor’s LGBT Advisory Committee are frustrated with her failure to confer with them since last October and have demanded a meeting which will finally take place today. One committee member told Chasnoff the mayor had thrown them “under the bus.”

Yesterday, Mayor Taylor’s “waste of time” comment went national in a report on Towleroad.com. In the article, she is compared to “wingnut GOP state Rep. Molly White.”

Last week, we told you how White’s staff told a gay constituent that discussing LGBT issues would be a “waste of time.”

Now, Mayor Taylor says San Antonio’s LGBT-inclusive nondiscrimination ordinance — which she voted against when it passed in 2013 — was a “waste of time.”

“To clarify: it is a waste of time and taxpayer dollars to re-debate an ordinance that was duly passed in 2013 and implemented under the direction of my office last year.”

“I do not consider any discussion of discrimination and equality to be a ‘waste of time,’ especially now with recent political events in different states. You missed a key opportunity to open up dialogue about some very key issues. You could have made a real difference in San Antonio. Instead, you have yourself become the waste of time,” wrote one commenter.

Another wrote, “Thank you for giving me the only reason I need to vote for ANYONE BUT YOU. If all citizens don’t deserve the protection of law, then you shouldn’t wait until the election. You should resign as mayor immediately. You are the worst mistake the City of San Antonio could have made. ANYONE would be better than YOU.”

The situation was similar on Twitter. According to Baugh’s report, “As Monday afternoon drew on, Twitter users continued to pile on the mayor, some making comments too obscene for the San Antonio Express-News to republish.”

A mayoral candidate forum scheduled for April 28 that was to have dealt with LGBT issues has been cancelled. The...