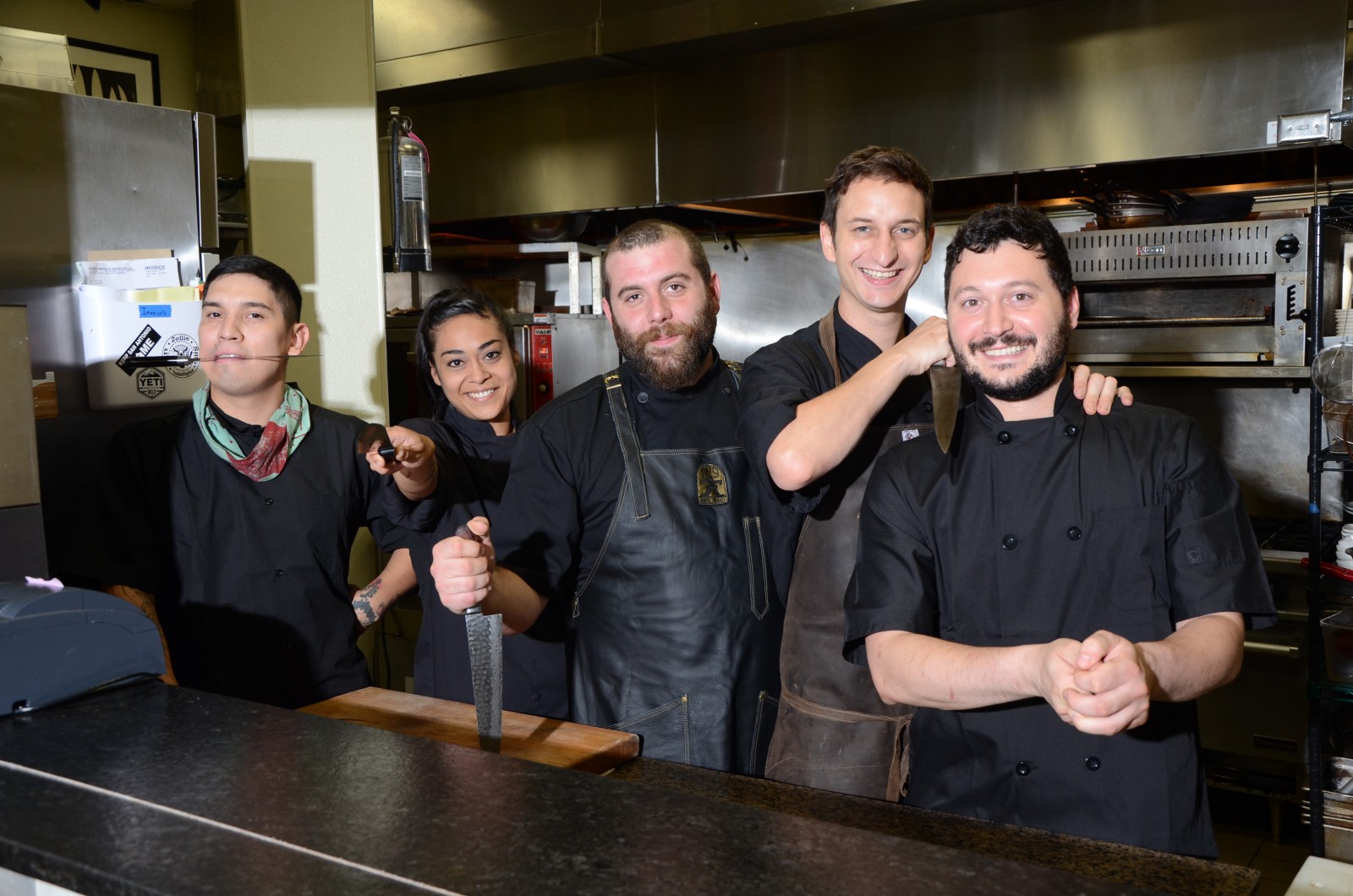 No, we’re not talking lightbulbs here, but we are talking about harnessing the lightbulb-like creative moments of a quintet of talented chefs, all of whom now have a say in how the kitchen at Brigid/Francis Bogside (B/B) runs. The result could be chaotic, but, fortunately, a benign drill sergeant has emerged to fill the shoes of departed chef Chris Carlson. (Fortunately, too, the LGBT-friendly vibe hasn’t changed at all; at a recent Out In SA mixer hosted by Francis Bogside, staffers, regulars and celebrants mingled with utter ease.)

Beardy Justin Richardson, 30, attributes his de-facto leadership position to the three years he spent in the military between sous-cheffing at Sandbar under Carlson and his current gig at B/B (where he was also Carlson’s sous) — that and to having a young family that includes two girls. (There’s a third child on the way and “if this one’s a girl, I’m in real trouble,” he says.)  Also bearded — but sporting a tighter trim — is Noel Hallagen, 27, who says “I’ve been in kitchens since I was 17 or so,” this before a trial run at a business degree at the University of Texas at San Antonio that he didn’t finish. Slipping back into the restaurant pool, he spent time at the now-shuttered Drew’s American Kitchen, dropped briefly by Il Sogno, then spent most of his career to date as a sous at Restaurant Gwendolyn and managing Kimura, the next-door ramen bar, both with Michael Sohocki. Since to-beard-or-not-to-beard has become a motif here, let it be said for the record that neither Evan Martinez, 27, nor Halston Connella, 30, has chosen to flaunt facial hair. At least for now. Martinez was in the second class of Pearl’s Center for Foods of the Americas — before the cooking school became affiliated with The Culinary Institute of America. He then went on to finish his degree at the New York campus, work for a time in NYC and “really caught the bug” under Ignacio Mattos during that Uruguayan chef’s tumultuous tenure at Isa in Williamsbug. Martinez next moved from hipster-haven Brooklyn to a “puerta cerrada” (hidden pop-up restaurant) called DUGAD in Santiago, Chile, where a volunteer team with an artistic bent served minimalist dishes in a setting a local blog described as “free from the restrictions of bosses and formal restaurant structures.”

Lanky Halston Connella’s CV includes a brush with an SUV — the one that was videotaped towing away the mobile Rebel Pizza oven he had built and manned after cheffing hours outside a bar on the West Side. (The oven was recovered, damaged, spurring a GoFundMe campaign to help repair it.) Less dramatically, Conella’s restaurant experience includes French culinary school in Austin, stints at L’Etoile with Thierry Burkle, Biga, helping chef Luca Della Casa open Il Sogno and more. And while many chefs preach the farm-to-table gospel, Connella lives it. “Vegetables and pigs are my specialty,” he says. And having just delivered to Brigid 1,000 onions grown on his parents’ property near Seguin, it would appear to be true. I forgot to ask how many pigs await the table. That oven still awaits repair, but as “people keep asking me about my pizza,” he plans more pop-ups such as one a while back at Folc.

In any restaurant, the pastry chef is usually something of an odd man or woman out — the hours can be different, the work environment more precise and demanding. Andrea Morgan, 30, does say that her schedule means that she doesn’t overlap totally with the kitchen team, but she appears to be one of the guys, regardless. Morgan also started, but didn’t finish, a business degree at UTSA (another motif?), but “really liked baking as a hobby” and decided to attend the Cordon Bleu in Austin. She externed at Silo, worked at Citrus with Robbie Nowlin, Starfish with Diego Fernandez, and as pastry chef at now-closed Arcade with Jesse Perez. A sideways detour took her into the realm of vegan, gluten-free baking at Little Aussie. “They give me free rein on the menu,” she says. “I’m responsible for all bread and desserts.” Yes, those burger buns are hers. So how do all these diverse backgrounds come together in a single kitchen? “These guys work their asses off,” says Richardson. “When we write a menu, we just sit down together.” Regarding new dishes, “they can come to me with a component; if I like it we put it in a dish, then on the menu … all we talk about is food, we go on food field trips … if there were a property available in the neighborhood we’d probably all be together as a commune.” Yet each chef maintains a personality, a specialty. Connella and Richardson, for example, are responsible for bringing in the caja China, the backyard cooking box that first turned out a whole pig, then banana leaf-wrapped halibut, as featured specials. Hallagen has a hand in the garden that’s also out back, where he deals with a rainwater irrigation system. “The energy in the kitchen has really exploded now that we can do our own specials,” he also volunteers. His evaluation is seconded by Connella.

“I’m really good at fish, but I’m not trying to do charcuterie,” states Martinez, with what appears to be well-deserved confidence. He’s also good at Japanese cooking, which means that he’ll soon be moving to owner Steve Mahoney’s izakaya, Hanzo. A void will need to be filled — beard not required, willingness to work as a part of a team a must.

“I was looking for a place that was ‘cool’ and quiet and that still had some dust on it,” says...