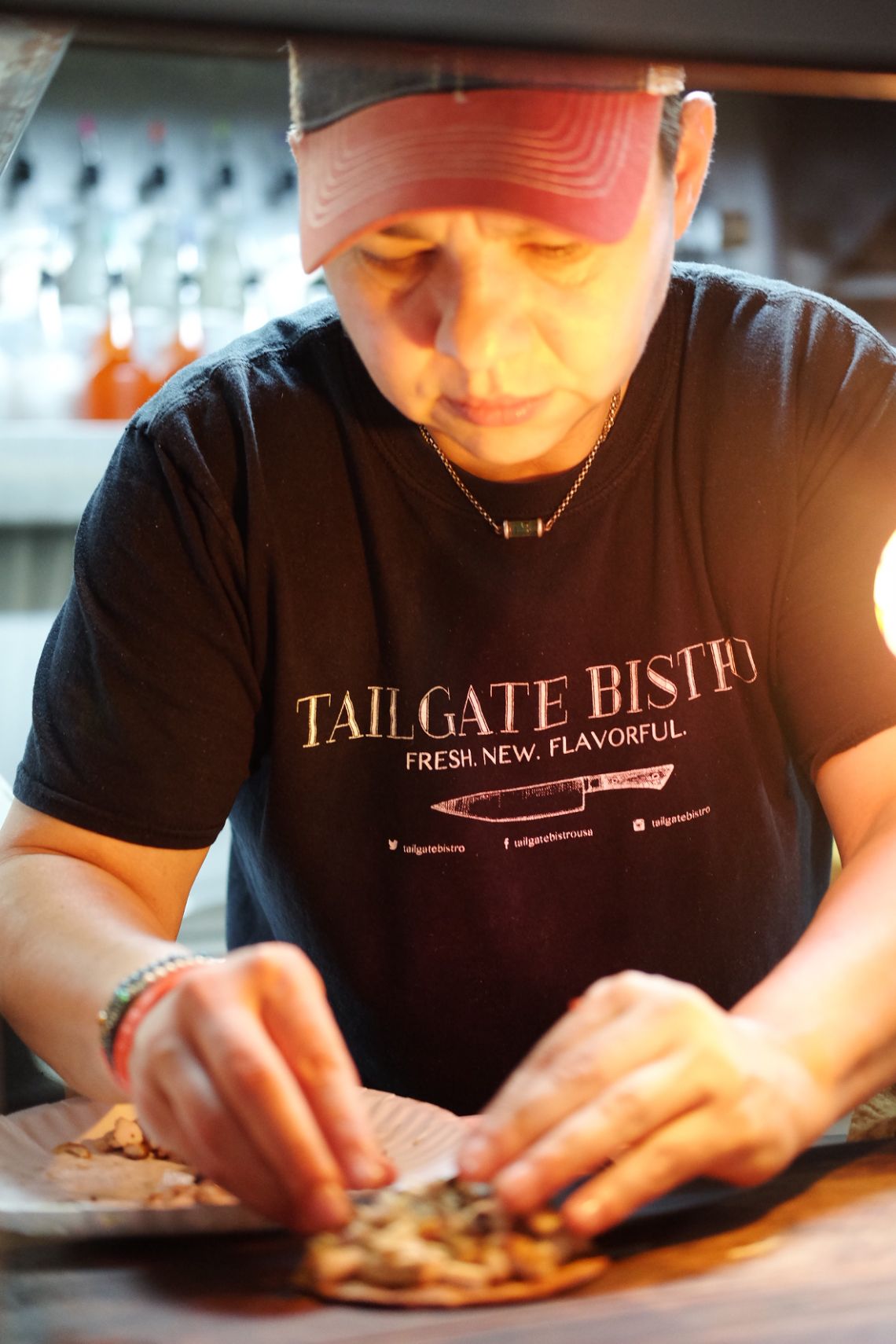 “I like the kitchen, the noise, being bombarded by tickets … you’ve got to be a little crazy, it takes a certain kind of personality, but I can’t imagine doing anything else,” says Monica de la O of cooking, her chosen profession. It wasn’t her first choice, just FYI.

We’re sitting outside of Southerleigh at Pearl where de la O, just minutes after working a long stint at the grill — short-cropped hair still under a baseball cap, clogs still the footwear of choice — is attempting to come down from the high of being bombarded. “I went to school for business management, but it wasn’t my thing,” she says. Still, that training may have helped her land a job in catering with local Mexican food magnate Blanca Aldaco. “I was in charge of setup, that kind of thing … then I started helping with the cooking and I liked that way better [than the management end].” The hook had been set.

De la O next went to the Westin Riverwalk, where longtime French chef Guy Collinet (the former Plaza San Antonio Hotel, the St. Anthony, Central Market, briefly his own place on Blanco Road) then held forth in a traditionally run kitchen — and brazenly asked for a job with no real experience to offer in return. “He was brusque but a good teacher,” she says of her two years there. Then began a period of moving around: to Florida with a friend, to California, then a little hotel in Twin Peaks (no, not that Twin Peaks) where she was by now a sous chef. Finally, she found her way back to San Antonio where she started working with chef Jeff Balfour at Citrus in Hotel Valencia Riverwalk, and “doing a little catering by myself.” Almost two years ago, “when Jeff opened Southerleigh, he asked me to come start up with him,” she says.

The bombardment high may be good as far as it goes, but even the most committed chef needs an outlet on occasion. De la O’s involves food trucks and pop-ups — yes, food is still part of the equation. It all started when she met activist Joan Cheever at a bar and began talking about doing a pop-up with all female chefs at Folc — a fundraiser for Cheever’s feed-the-homeless efforts and for a peace initiative spearheaded by Patricia Castillo. “It was a women-helping-women” effort involving seven creative minds, says de la O. They got everything donated, turned out six courses for $75, and created some great, residual goodwill. Pop-ups come and go by their nature, but de la O and some other chefs she recruited continue to work with Cheever every Tuesday in her sometimes-embattled feeding-the-homeless operation The Chow Train. (The city issued Cheever a $7,000 citation in 2015 for dispensing food out of the back of a pickup, not the food truck that was licensed, but later dismissed it.) “We cook in the food truck and go to four locations a night, ending up in Maverick Park. All the food is donated, so we have to deal with that. We might get a bunch of cheese one week so that could turn into a lasagna … it’s pretty simple: [entrée], salad, dessert … we might serve up to 75 people at the end of the month [when what money the homeless have is running out],” she says — adding that “I really like volunteering. It’s outside, you get to see people get happy, it’s super-relaxing, a calming time.”

It might not be super-relaxing to embark on a sideline catering business with another friend, Ana Fernandez (an accomplished local artist with her own food truck, Chamoy City Limits, specializing in super-inventive and hyper-colored raspas), but it’s bound to be rewarding. “I would always go to [art] openings with Ana and would think ‘I can do so much better that this’ of the food, so we’re going to do just appetizers, museum openings, that kind of thing. The website is almost up, we’ve cooked at Ana’s house, photographed plates …” The exact name of their enterprise may still be up in the air, but the rest seems to be right on track for a launch this year. As for owning her own place some day, “That depends. Catering with my own ideas, my own food is good for now.” Cooking at home? “Nobody does that! I’m never hungry while at work; I’m always tasting. But [when I leave] I’m starving. It’s Taco Bell drive-thru … I have no time for other restaurants. I just want to go home, shower and sit on the couch.” And maybe have a Lone Star. “I only drink Lone Star,” she states.

And then she backs off of both assertions a little. “I do like the shrimp boil at Southerleigh, so when I’m there I’ll have [brewer Les Locke’s] the Darwinian.” More prodding reveals that she also likes the burger at Cured (we second that emotion) and that she is partial to Jeff White’s cooking at neighboring Boiler House — especially things that have gone off the menu so she can annoy White with comments such as “Don’t give me these shitty new mussels; I want the old ones.”

None of this is to suggest that she has gotten tired of working at Southerleigh. “The menu changes with the seasons and the purveyors so I haven’t gotten bored.” So why not try to do it all, catering and volunteering included? “I mean, I’ve been cooking for 15 years, I really like to cook ” she says, the smile under the baseball cap conveying more than words.

As we move further along into season nine of RuPaul's Drag Race, Rey Lopez Entertainment is bringing another one of the...