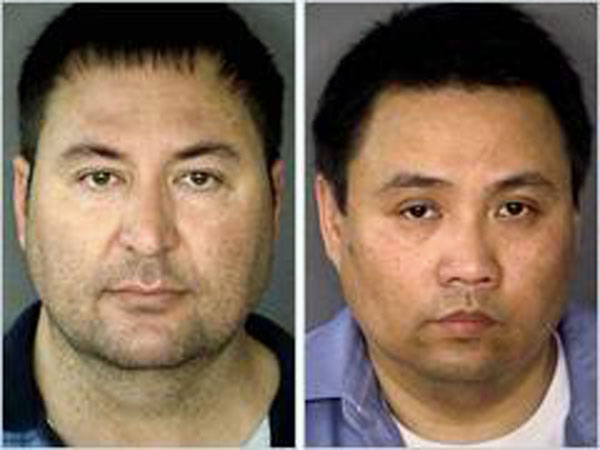 Matthew Oscar Aranda and Norberto Velasquez were both found guilty of injury to a child by omission in the 2009 death of their adopted daughter Melody Aranda Velasquez. (Courtesy photos.)

The tragic story of a three-year-old girl who died while under the care of her adoptive fathers came to an end on October 3 when one of her dads, Matthew Oscar Aranda, who was convicted in her death, was extradited from Mexico where he was hiding for the past five months.

Aranda and his partner, Norberto Velasquez, adopted Melody Aranda Velasquez after evidence of abuse and neglect led Child Protective Services to remove her from the care of her biological parents when she was three months old. The girl lived with Aranda and Velasquez and their three adopted sons at a home on the West Side.

In April 2009, the couple were arrested in connection with Melody’s death on January 11 of that year. The men told police the child had fallen down a flight of six stairs.

According to police and news reports, Melody’s fathers treated the child with ice packs and Tylenol immediately after her fall.  However, the next day she developed a high fever and began to have trouble breathing. The couple called an ambulance and the child was taken to Wilford Hall where she was pronounced dead.

The Bexar County Medical Examiner’s Office ruled the death a homicide from blunt force trauma to the head. X-rays showed the girl had more than a dozen broken ribs.

Police charged Aranda with capital murder. His bond was set at $250,000. Velasquez was charged with injury to a child by omission with bond set at $100,000. The couple’s three sons were placed in the care of Child Protective Services.

Mary Walker, spokeswoman for CPS, told the Express-News at the time that “the couple hadn’t been previously investigated for allegations of abuse or neglect. They had passed extensive background tests to be eligible to adopt and foster children.”

Velasquez’s trial began on October 29, 2013. He was found guilty of injury to a child by omission and was ordered to serve probation. However, before the sentence could be officially read, he was taken to the hospital where he died of complications from pneumonia on November 30.

In an interview with KABB-TV, Velasquez’s attorney Raymond Martinez said, “When he (Velasquez) lost his child, he took it as hard as any parent would take it. I really think he lost his will to live not because of the conviction, but because of the loss and people thinking he contributed to it when all he ever did was try to do the best he could.”

According to the San Antonio Express-News, in the months after he was charged, Aranda had to wear a GPS ankle monitor. However, Judge Angus McGinty allowed the monitor to be removed in 2010. Shortly before his trial began in May of this year, Aranda went missing.

During the trial, the Express-News reported that Aranda’s defense attorney Charles Bunk “made an impassioned closing argument, telling jurors the state had ‘demonized’ his client and had presented no evidence that a murder had been committed.”

Despite his failure to appear in court, on May 13 Aranda was found not guilty of murder in the death of his daughter. The jury instead chose to convict him of the lesser charge of reckless injury to a child by omission, a second-degree felony. He was sentenced to 20 years in prison.

The Express-News reported, “Court officials had still not outright explained Aranda’s absence to the jury by the time they started deliberating. Outside the jury’s presence Wednesday, visiting Judge Pat Priest revoked his $250,000 bail after he failed to appear in court, deeming him a fugitive.”

WOAI-TV reported the Lone Star Fugitive Task Force had been searching for Aranda since he failed to show up for his sentencing: “Sources close to the investigation said Aranda was actually trying to drastically change his appearance through plastic surgery in Mexico after he skipped town . . .”

Aranda was located in Chihuahua, Mexico and turned over to authorities in Texas on Friday, October 3.

Sola Salon San Antonio offers a beautiful, professional home for stylists who are ready to take their career to the...