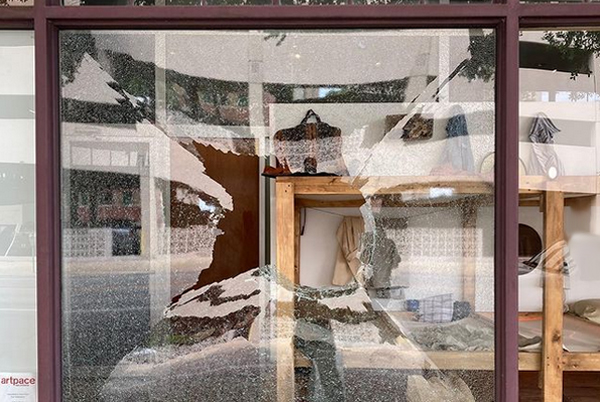 In an apparent act of vandalism, someone earlier this week shattered a window at downtown contemporary art complex Artpace.

According to artist José Villalobos, the vandal hurled a brick through one of the Main Avenue windows facing his exhibition “De Los Otros.” Artpace positioned the installation by the windows so passersby could view it from the outside.

“Early this week I was informed that the windows, which allowed 24/7 access to view my exhibit, were vandalized,” Villalobos said in a Wednesday Instagram post. It was accompanied by multiple photos of the broken window and glass littering the building interior.

In several images, a chunk of brick and glass shards are visible on one of the cots used in the installation.

Villalobos is a Latinx and gay artist whose work protests “the toxicity of machismo.” “De Los Otros” centers on the true story of a gay farm worker who was a part of the Bracero Program, which brought millions of Mexican laborers to the United States in the mid-20th century.

In his post, Villalobos said it was hard not to imagine that the attack might have been directed toward him or due to the nature of his work. “A brick was thrown through the main space, and it’s difficult not to feel that this is a personal attack as a queer individual,” he stated. “This has allowed me to reflect deeper on the small mindedness and the lack of acceptance of the narratives of my work.”

“I view this act as fuel to empower my practice. Thank you to those who brought this incident to my attention, thankfully no one or anything was harmed,” he added. El Paso-based photographer Jeanette Nevarez captured Villalobos in a hat he hopes to use in a future performance.

“At Artpace we support the creation of artwork and exhibitions that explore important and timely issues for our community,” Artpace told the San Antonio Current via email. “The vandalism of our building and José Villalobos’s exhibition is concerning and incredibly disheartening, but we are in the process of getting the window replaced so that the exhibition can be again on view for all to see.”

According to Artpace, “De Los Otros” has been extended through July 18, and an upcoming screening of Villalobos’ associated performance work is in the works.

Artpace is open to visitors by appointment, and “De Los Otros” will again be available to view 24/7 from outside once the window is replaced.

The proposal would prohibit students from participating in a sport “that is designated for the biological sex opposite to the...