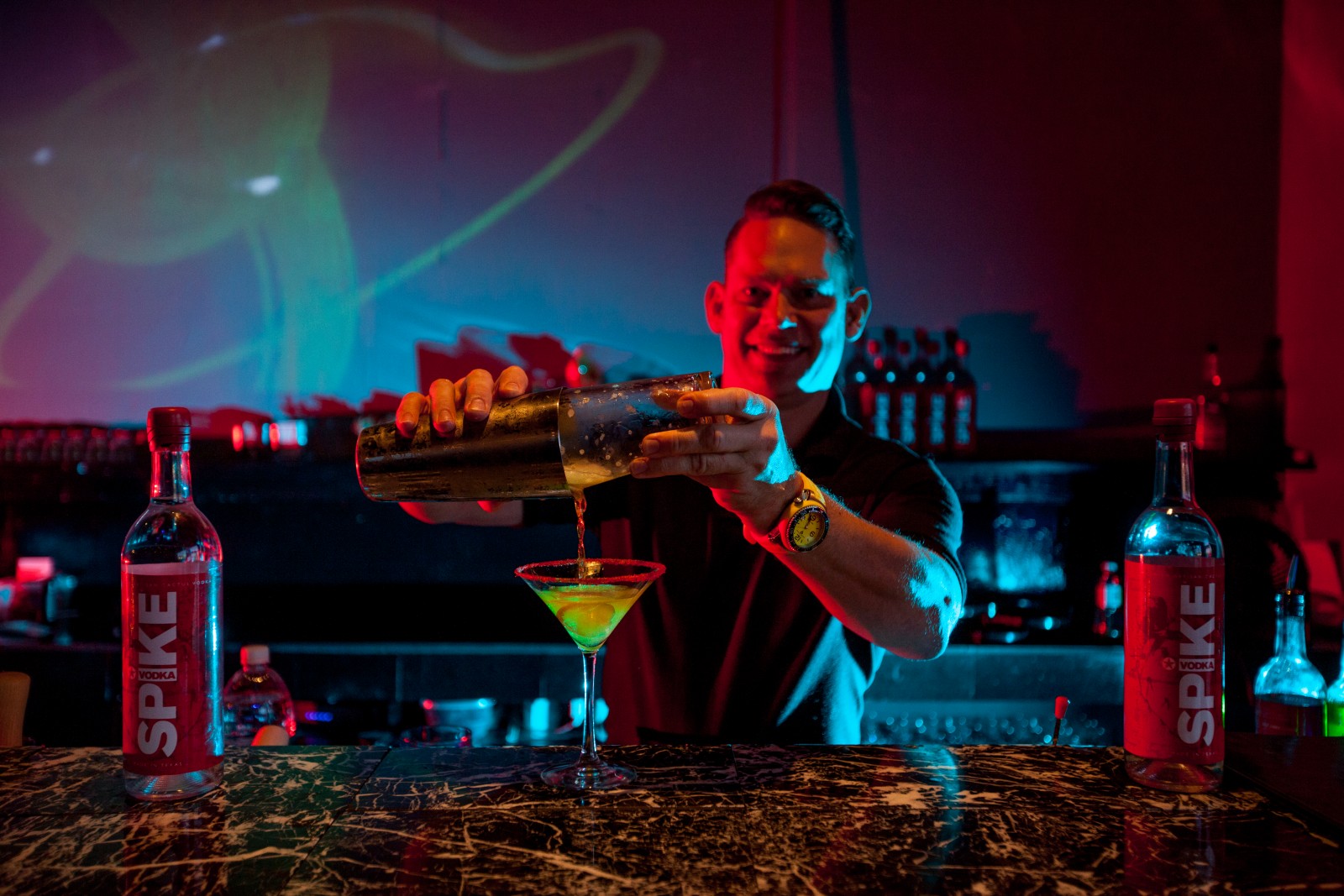 When I arrive for our meeting, Nick Spink greets me with circular saw in hand — no, this is not a variation on the chainsaw theme. Spink is just in true-to-form, do-it-yourself mode making a portable bar for the private tasting room at his new enterprise, Artisan Distillery & Drinks — a “craft vodka lounge,” as he describes it. Long a gleam in already manic eyes, the lounge is the result of a lot of sweat equity. And cactus paddles. Please bear with me as I shamelessly quote myself from a previous article:

Spike, Spink’s debut spirit, “is a unique and truly artisanal vodka that just happens to be made from cactus. Unlike many much larger operations that get their base alcohol from industrial producers, ‘mine is truly handmade,’ he says. And there’s no doubt about the claim when you visit his operation in the back of a Northwest side building whose main tenant is a music school. The pads, thorns and all, are first given a sterilizing boil on a repurposed cooktop, after which yeast is added and the brew is moved to blue, 55-gallon drums, where it sits for two months. (At this point, ‘it smells like bad beer,’ he says — and he’s right.) The liquid is then transferred to his still, (it looks like the high school science project of a precocious student — Medusa-like tangle of tubes and all) from which it emerges at 95 percent alcohol, is diluted to 40 percent, and is run through active charcoal filters. Spink then hand bottles the now-vodka, caps it with a home-brew capper, and labels each one with a rudimentary roller — all by himself, alone, solo.” The solo part hasn’t changed; with the introduction of a second product, Texas Pride Vodka with a corn base, and the move from the Northwest side to 315 8th Street (just off Broadway), the time commitment just got more intense. So intense, in fact, that Spink recently left his day job at USAA to concentrate full time on vodka production (there are now two column stills looking much more orderly than the old Rube Goldberg contraptions) and cocktail slinging. Yes, he’s behind the bar, too — though there he does have help. “It gets a little scary around bill-paying time,” he admits, but not having to frantically shuttle between the formal job and the passionate one has made life easier in other ways.

He designed and fitted out that bar, too, by the way. And he does the vodka infusions that go into some of the drinks (like other distillery/bars such as Dorcol and Ranger Creek, he can only sell cocktails made from alcohol he produces himself — thus making drinks creation another necessary talent). What he does not do is to pitch himself as the kind of craft cocktail bar where “presentation trumps product” and big ice reigns supreme. “I want it to be approachable,” he says. And that includes the LGBTQ community.

Artisan recently hosted a happy hour for Guerilla Queer Bar, a monthly, second Friday “social event open to all queer folk and their cool, straight friends,” according to Facebook posts. There were about 150 people, says Spink. But he also adds that though he intends to hold more events and benefits that support the LGBT community, he is really more intent on becoming inclusive than exclusive. Which leads to some musing on his part regarding local gay bars’ sometimes reluctance to support gay products. More on that another time. Spink’s vodkas are now distributed all over Texas, and on any given Saturday you might find him sampling them at, say, Total Wine & More. His 2017 resolutions: get out to more local bars to familiarize them with Spike and Texas Pride; start seriously working on some naturally flavored vodkas … and perhaps think about also producing a rum or a whiskey. “I have enough space here to barrel age,” he says, “but whiskey’s not my forte; the right partner would have to come along.” At last, something he won’t be trying to do all on his own.

Regardless of what direction the distilling takes, the Spink stamp will continue to be apparent — in the bottle and on the walls at Artisan. He now hosts rotating art shows curated for him by Alex Rubio. (At interview time, a selection of cyanotypes and photos by Shelby M. Rocca was on view.) But on more permanent display is work he created himself starting in the ’90s. “I used to show in Dallas,” he says simply. One large piece in the distillery itself dates from that time; other more-abstract works are recent.

And though it might be easy to think of art as a release from the day-to-day work of distilling and promoting, not for self-taught Spink: the two are intimately intertwined. “It’s kind of an Art Nouveau philosophy,” he says. “Art touches life in all of its aspects just as life touches art.” High falutin’ words from someone with a seat-of-the-pants approach to most everything he does. Yet comforting. Explore the ethic in a Farmer’s Martini with basil, bell pepper, poblano, a lemon infusion and fresh jalapeño and see if that doesn’t touch the palate.

Originally published in the San Antonio Current. Sure, former Texas governor Rick Perry is now charged with overseeing the nation's...