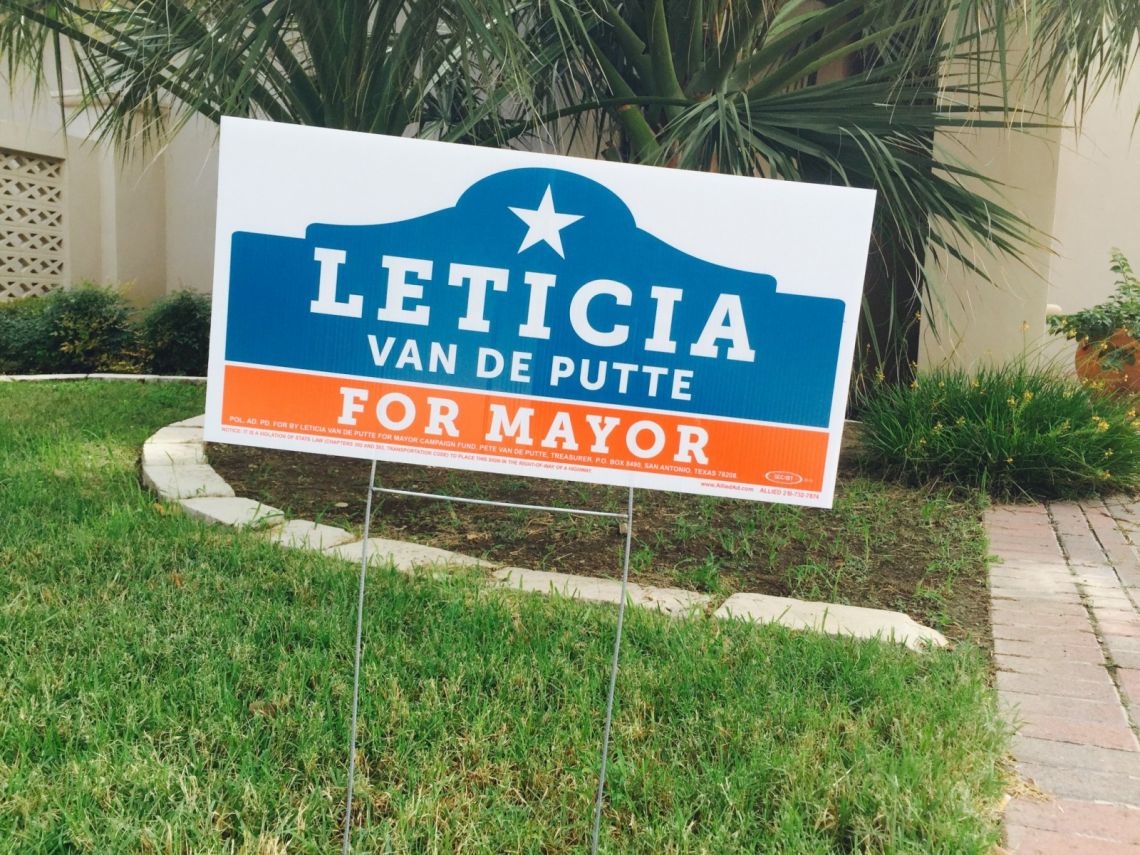 I have always paid attention to politics and I have always voted. It’s important to me to stay informed and involved. Over the past several months I  spent a significant amount of time on the sidelines of the Leticia Van de Putte campaign as the girlfriend of someone working for Leticia. In that time, I attended at least seven fundraisers, watched several mayoral forums, went to dinner with Leticia and her family, and hung out in the office during events. I would say I have gotten to know Leticia fairly well over the past few months.

And I think San Antonio got it wrong June 13.

This is my opinion and you know what they say about opinions. This one is all mine.

The more I’ve gotten to know Leticia, the more I have liked her and the more convinced I have become that she was the right person to lead our city over the next few years. I am still shocked she didn’t win.

I don’t know Ivy Taylor personally. I know she was against the NDO and felt the entire process was a “waste of time.” Her words, not mine. She believes that businesses should be allowed to discriminate against members of the LGBT community because it is their right as business owners. I know she aligned herself with the Republican Christian Conservative voters during this election. When I heard her speak at a Cornerstone Church mayoral forum, she talked about growing up in a very strict religious family and their traditional interpretation of the Bible—but it’s public record that she is a Democrat and supported Obama in both of his campaigns. I think she is less conservative than she’s been pretending to be these past few months to win votes, and that bugs me a lot. I think she knew where to go for the votes, and dislike of the LGBT community gets people to the polls.

However, I admit that at the forums I attended, Taylor was intelligent and well spoken. When I heard her speak at the State of the City luncheon a few months ago, she impressed the hell out of me. But Ivy also lacks warmth; she comes across as unfriendly and cold … which isn’t necessarily a deal-breaker for me. I think women are too often expected to be “sweet” instead of powerful, and I have no trouble with a woman who wields confidence and speaks her mind. But her stance against equal protections for the LGBT community is absolutely unacceptable to me and she lost my respect immediately as a viable candidate because of it. I admit, I didn’t hear much of what she had to say after that Cornerstone Church forum.

Beyond that, I don’t have anything else to say about Ivy Taylor.

Leticia Van de Putte, however, I have learned a few things about:

1. Leticia is San Antonio. As I watched her navigate through events at every level of the economic ladder, she was just as comfortable in Harvey Najim’s stunning 8,000-square-foot home as she was at a West Side fundraiser dancing to “Uptown Funk” with her cousins. She switched between Spanish and English without missing a beat. She knows San Antonio because she has lived here for most of her life and raised six children here. She told me once that politics is nothing compared to raising six kids. She has been getting up at 5 a.m. since her kids were small, and she had to make their lunches and do laundry before waking everyone up for school in the morning. She really did all that, and she’s got the kids to prove it. At the King William parade during Fiesta this year, she grabbed a lasso and twirled it around with reasonable skill, explaining she had been on a team for it when she was young. (They have teams for that?) She can tell you the ins and outs of this city, its history, its problems, and needs because they are her needs, too, her children’s and grandchildren’s needs. She is a homegrown success story who graduated from Jefferson High School and earned her pharmacy degree from UT Austin. She was a local pharmacist on the West Side while raising her children. She loves San Antonio.

2. San Antonio loves Leticia. I think this is where I made the mistake of thinking there was no way she wouldn’t win—because everywhere I went with her people adored her. She must know thousands of people’s names because she knew people everywhere. She knew their names; their children’s names; she went to high school with everyone’s cousin or nephew, or her kids went to school with their cousin. She knew the names of waitresses and restaurant owners; she kissed cheeks with board chairs at billion-dollar energy companies, and then snuck back to the catering kitchen to sit down for a few minutes and hang comfortably with the kitchen staff. Leticia listens when people talk to her. She listens completely and she remembers what she hears. Every interaction is authentic. Her enthusiasm for people and her ridiculously high energy are endearing; she makes people feel special. She is one of the most engaging people I have ever met. Engaging and down to earth: a rare combination. On the final night of the election as the first votes were being announced, the audience was filled with gay and transgender people, business owners, blue-collar workers, policemen, retired folks, artists … literally people from every community in San Antonio. And when it became clear that she wouldn’t win the election, we all wept at the news … because she really is incredibly lovable. If you tell me you don’t like Leticia Van de Putte, I can guarantee you haven’t spent any time with her. She’s kind of impossible to dislike. Fact.

3. Leticia has an amazing family. Her mother attended events, day after day and often late into the night. Her husband, sisters, children, grandchildren, nieces, nephews, and cousins–so many cousins–surrounded her at every event. They wore pins that said “sister” or “Leticia is my Mom.” One night, sitting at the home of a supporter, Leticia’s mother sat down at the piano and began to play. Leticia stood transfixed by the sight, tears in her eyes and a smile on her face. It was beautiful to watch the strength of her family and their crazy passion for supporting her. Seriously, people, did you ever see Mayor Taylor’s husband at an event? Ever? I didn’t. Not one. But whatever, I said I wasn’t gonna mention Taylor again. I can’t help it, though. It’s weird. Was I the only one who thought that was weird?

4. Leticia is a politician who gets things done. So far, my “you got it wrong, San Antonio” has been focused on how likable Leticia is. But get her started on something she feels strongly about politically and a light comes on and she gets serious, smart, and wicked articulate. She will debate you into a corner. Watch her at the Texas Democratic Convention if you want to see Leticia in action and on fire. Or watch her debating Patrick. Remember that time she was ignored during the filibuster and she said, “At what point must a female senator raise her hand or her voice to be recognized over the male colleagues in the room?” and the entire room went crazy? Leticia does not back down until her viewpoint has been expressed. She listens but demands to be heard. She voted against the changes to the property-tax system despite negative press over the vote because she felt strongly that implementing the changes and the increased regulatory work for the agency would set off a significant jump in property taxes. Have you seen your property-tax bill yet? It’s ugly. And yes, you can fight it more easily thanks to the legislation. But she was right about the fallout from the new legislation. The conservatives I talked to said they were voting for Ivy because she was more business-friendly, but Leticia’s voting record is very pro-business. This is why so many powerful business leaders in San Antonio supported her for mayor. Another fact.

In the Senate, Leticia was known as incredibly effective, able to work across party lines and get consensus on difficult issues. This is the reason police and  fire unions wanted her, because she has earned a reputation as someone who treats others with respect, listens and tries to find a compromise that allows everyone to feel as though they have won. This is what she is known for as a politician. You didn’t hear any debate about that during the election because, frankly, there wasn’t much to debate … I think you would be hard pressed to find anyone who has worked with her that wouldn’t agree with that. She can be a tough cookie when she has to be. She didn’t spend this much time in politics because she was born into wealth or power or prestige. She earned her reputation and she did it because she was good at it. Yes, a career politician: that’s who she is and she’s made a name for herself as being pretty damn amazing at it.

So anyway, that’s why I am struggling to take down my yard sign. I wanted Leticia to be the next mayor of San Antonio because I believed she would be brilliant at it. She has shown me, simply by observing her over the past few months, that she was ready for the job. I am bitterly disappointed she didn’t win. I am sad and I am angry at San Antonio because I think they made the wrong choice for mayor.

Prove me wrong, Mayor Taylor. I hope you do. This is one time that I would love to be wrong.

LGBT Safe Zone Training: Learn how to be an ally