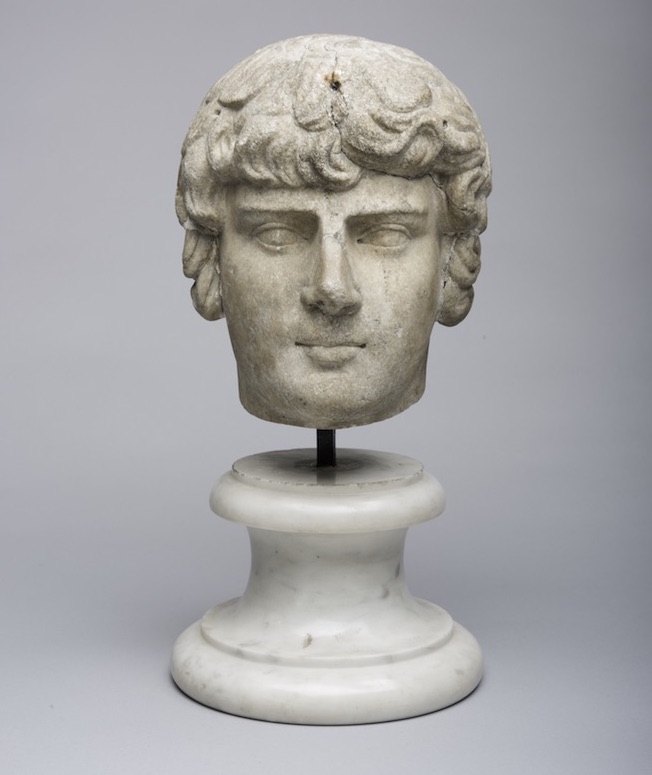 In antiquity, it was not uncommon for freeborn males to have sexual relationships with other males who were younger and of a lower status. Such was the case between the emperor Hadrian and his beloved Antinous, a young man believed to have been only 19 years old at the time of his death.

Bringing to light the story of these two men, the San Antonio Museum of Art’s exhibition “Antinous, The Emperor’s Beloved: Investigating a Roman Portrait” marks one of the first times the museum has offered a scientific examination of one of it artworks. The exhibition centers on the museum’s stone portrait of Antinous, which was once part of an over-size statue when it was first created in the second century AD.

In the summer of 2011, SAMA curator Jessica Powers, along with Trinity University chemistry professor Michelle Bushey and her undergraduate research assistant Madeline Corona, discovered remnants of ancient gilding on the head of the sculpture, leading to further investigation of the statue’s history. A forensic analysis of the ancient statue suggests it was once painted in a pigment known as “Egyptian blue” and an ivy wreath placed atop the head was covered in a layer of gold. The exhibition also  includes a documentary recounting the museum’s research, which reveals the original appearance of the statue and considers the many phases of restoration that have resulted in its fragmented appearance. While little is known about Antinous, it is believed he was born in Bithynia, a Roman province near present-day Turkey, and met Hadrian when the emperor traveled there in the 120s. Antinous’ mysterious death by drowning in the Nile and the emperor’s over-the-top displays of mourning (including the founding of Antinopolis) have led to centuries of speculation: Later historians have considered the possibilities of his death to be a suicide, ritual sacrifice, and even murder.

In his physical prime at the time of his death, Antinous is celebrated for beauty that’s well documented in stone portraits outnumbering any other figure from the Roman world other than the emperors Augustus and Hadrian. Statues of Antinous, who would later be deified by Hadrian, often highlight his full cheeks, pouty lips and thick, curly hair. Often portrayed in the nude, Antinous’ hand-over-head pose is comparable to other statues of the gods Dionysos and Apollo, which were meant to emphasize their physical beauty. Head of Antinous as Dionysos

Over the centuries, the myth of Antinous has only grown as it attracts new interest from playwrights, poets and novelists. Although the sexual relationship between Hadrian and Antinous has been overlooked by some writers, in more recent times Antinous has re-emerged as an LGBT icon. Perhaps, Marguerite Yourcenar’s classic novel Memoirs of Hadrian (1951) has provided the most touching portrayal of Antinous and Hadrian’s relationship.

What Defines a Sex Addict Anyway?

Hey, Doc! I was totally just told that I’m a sex addict. I’m not even really sure what that means....