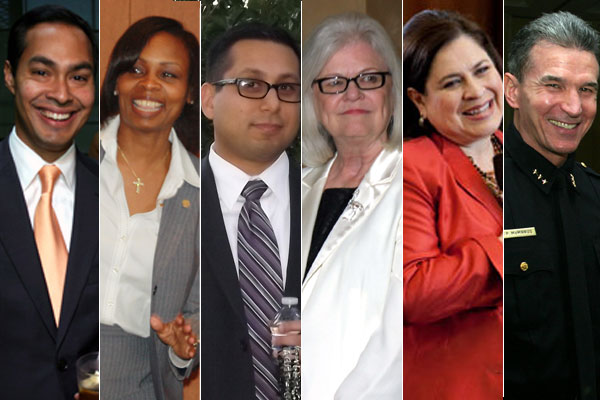 2014 in Review - Newsmakers: Mayor Julian Castro was appointed Secretary of Housing and Urban Development. Ivy R. Taylor became interim Mayor of San Antonio. City Councilman Diego Bernal stepped down to run for the State Legislature. Judge Barbara Nellermoe, who's leaving the bench this year, denied a bid from the State of Texas to stop divorce and child-custody proceedings between a lesbian couple. Leticia Van de Putte lost her bid to become state Attorney General and is now running for Mayor of San Antonio. Police Chief William McManus is leaving the SAPD to take a job at CPS Energy.

1. S.A. federal judge finds state same-sex marriage ban unconstitutional
Last February, U.S. District Judge Orlando Garcia struck down the state’s ban on same-sex marriage ruling it violated the Fourteenth Amendment rights of gay couples to equal protection and due process of the law. The judge stayed his decision pending appeal. On November 24, attorneys with Akin Gump, the law firm representing plaintiffs Vic Holmes, Mark Pharris, Cleopatra DeLeon and Nicole Dimetman, filed a motion with the federal district court to lift the stay. Despite the motion, Garcia did not lift the stay and the case now goes before the U.S. Court of Appeals for the 5th Circuit in New Orleans in January.

2. Local LGBT allies depart for new jobs and opportunities
It was a year when several LGBT allies left their jobs to pursue new opportunities or run for another office. Mayor Julian Castro accepted the President’s invitation to become Secretary of Housing and Urban Development. City Councilman Diego Bernal resigned to run for the seat vacated in the Texas Legislature by Rep. Mike Villarreal.

Police Chief William McManus is leaving the SAPD to become chief of security for CPS Energy. 45th District Court Judge Barbara Nellermoe is stepping down after twelve years on the bench.

County Commissioner Tommy Adkisson stepped aside so he could run for County Judge but lost the race to incumbent Nelson Wolff. On December 28, he announced his run for mayor.

Assistant Police Chief Jose Banales, who is the SAPD’s liaison to the LGBT community, was reported to be a finalist for a new job as the police chief of Aurora, Colorado.

3. Commissioner’s Court adopts “plus-one” insurance plan for county employees
The Bexar County Commissioner’s Court on February 4 voted unanimously to modify the county’s benefits program to allow employees to add a “plus-one” qualifying adult to their insurance plans. The “plus-one” insurance plan permits county employees in same-sex relationships to insure their partners or spouses without having to qualify their relationship as a legal marriage or domestic partnership thus eliminating any conflict with state law which forbids same-sex unions.

On June 7, Marciela Fonseca and her girlfriend Gina Ramirez say they were asked to leave Sanchez Ice House because they had kissed. Soon after the incident, the couple filed a nondiscrimination claim with the city. David Snow, a San Antonio Police Department detective was assigned to investigate the case. Snow’s subsequent report reiterated the claims made by Fonseca and Ramirez and the owners of the ice house but offered nothing in the way of clarity regarding what truly happened.

Justin P. Nichols, the attorney handling the two nondiscrimination cases, says the claimants have been hampered by a lack of procedural guidance from the city.

5. S.A. judge allows same-sex divorce
State District Judge Barbara Nellermoe denied a bid from the State of Texas to stop divorce and child-custody proceedings between a lesbian couple. Nellermoe previously had ruled that Texas’ restrictions on same-sex marriage are unconstitutional, and her latest May 14 ruling prevented the state from intervening as a party in the women’s court battle.

6. City Council selects Ivy Taylor as interim mayor
Despite lobbying by some in the LGBT and allied community against her, the City Council appointed Ivy Taylor as interim Mayor of San Antonio. Taylor voted against the nondiscrimination ordinance last year but appears to be making good on her promise to strengthen the ordinance’s filing and enforcement mechanisms. She appointed activist Marsha Warren as LGBT liaison to her office and assembled a three-person LGBT advisory committee (Warren, Ruby Krebs and Robert Salcido) who will work to help make her plan a reality.

8. State Senator files resolution that says religious beliefs trump LGBT rights
State Sen. Donna Campbell of New Braunfels proposed a constitutional amendment that would make it legal for Texas businesses to fire LGBT employees and turn away LGBT customers if their religious beliefs compel them to do so. The proposal, Senate Joint Resolution 10, was filed on November 10, the first day of pre-filing for the legislative session that begins in January.

9. Hate crimes against gays and lesbians top numbers in S.A.
FBI crime statistics released in December show that San Antonio comes in third in the state with the number of hate crimes committed in 2013. The majority of those crimes were perpetrated against gays and lesbians. The FBI numbers show that 11 hate crimes were recorded in San Antonio last year, seven (63 percent) of those were motivated by the victim’s sexual orientation.

10. Pride Center leases office in Monte Vista
With viable real estate options in short supply, the board of directors of Pride Center San Antonio decided to rent a small office from where they can plan programs and events which would then be held at other locations. The new office is located at 147 East Mistletoe at the corner of McCullough Ave. in the Monte Vista Historical District.

Last July, San Antonio Police Chief William McManus announced he would be leaving the department at the end of the...