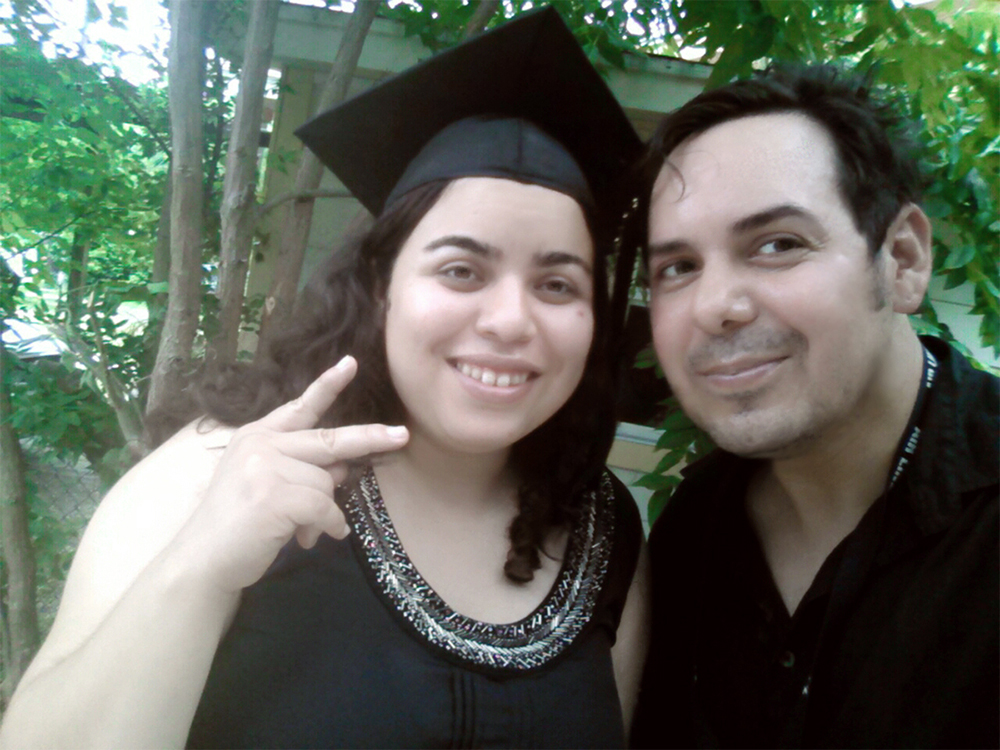 The author, right, and his little sister, reunited. Courtesy image.

The moral of this story, apparently, is when you’re la consentida, you can bring transgender friends home.

Despite the fact that we were both born through a family with a deep history of homophobia, it still comes as a surprise to me how much more my half-sister Olga and I have in common. I’m the first-born son. She’s the first-born child from our father’s second marriage, and of his five natural-born children, the one some of us call la consentida: the favored one. Last month, our family caravaned from San Antonio to see Olga receive her master’s degree in Latin American and Border Studies from the University of Texas at El Paso. As the celebratory weekend came to an end and my sister and I began our nine-hour trip back home, it nearly went unobserved that we had waited almost 20 years for this quiet reunion.

My father, a retired U.S. Army officer, and I haven’t spoken since my own coming out in the early ’90s. Olga, whose emotional connection to my father appears absolute, has yet to come out to him. Her reasons for staying silent are sound. “I think there’s a history in our family of looking at homosexuality as a perversion,” she says as we pass an 18-wheeler with plates that read “Land of Lincoln.”

The use of that brow-raising word propels me to momentarily revisit my family’s core and shared beliefs. I have a lucent memory of my father’s sister, the middle one of the three, telling me at the dinner table, “People are calling you a faggot. And I’m telling them it’s not your fault. That you’re sick in the head!” It was around the time of my 22nd birthday. On that particular day, my tia’s potato salad wasn’t so tempting.

Thus, with the exception of funerals, I’ve made it my personal custom to sidestep family gatherings on my father’s side. Since the long-expected death of my grandfather in 2013, my father has served as the de-facto patriarch of our multigenerational country clan. (Not that his pending cachet didn’t wield social influence in our family before. He was, as any of my aunts or uncles will tell you, his parents’ consentido.) We are a family of ranchers. From virulent stares to actual threats of vigilante-inspired assault, it’s been made abundantly clear that my sojourns to his property are on an enter-at-your-own risk basis, despite painstaking attempts by my Honduran-born stepmother to piece together this shattered relationship.

“I remember you dropping me off and Dad being really pissed,” Olga says. “It probably wasn’t healthy that I was there, but he was saying something about not wanting you in our house.”

That’s pretty much how I remember it.

Over the past six years, Facebook has allowed me to happily observe Olga’s college journey. Images of her standing in the rain protesting injustices against Latin American women never failed to deliver a smile to my face. Perhaps we’ve always known that we’d be free to rejoin each other’s life once she reached adulthood. Her graduation ceremony was a threshold reminiscent of my move to New York years ago.

“I’ve always been a strong advocate for you,” she says from her shotgun seat. Her charger was accidentally packed in the U-Haul so her phone is dead. I tell her, “I appreciate that,” in the cool manner that I often say the words because it’s a pointless endeavor for a grown man to complain about his dad’s anti-gay slant. But Olga calls attention to a distinctive layer of the gathering that I’d missed.

“It seems that up until this point, it’s only been at funerals that we’re able to have that moment of all of the siblings together in front of Dad,” she says. Even when bustling with enthusiasm, her voice, like her mother’s, is so naturally soft that I have to lean in to catch every word.

She’s right. It is unusual. “This event was a positive thing for me so he couldn’t really say anything,” she adds.

Her grief at my grandmother’s 2004 funeral, she recalls, was augmented by the knowledge that I wasn’t welcome in her home despite my stepmother’s continued, but creditless, invitations.

“[But] you showed up pretty fabulous,” Olga recalls with a smile. “Remember you had that really nice suit? It was very elegant. It was silk. It was awesome. It had designs on it.”

Like most show-business types, I don’t really have regular clothes.

“All it needed were those white ruffles,” she says teasingly. Then her face becomes solemn. “I felt like Dad was really uncomfortable with you being there. He wasn’t really trying, you know?”

When the four of us held each other near Grandma’s casket, the weight of his stare didn’t go unnoticed. The half-sisters were still teens. The youngest brother of the first batch had missed his flight.

“It’s still scary,” she says of her coming-out process. “Obviously, when I think of him, I think of you. I think of the past and it’s traumatizing for me. [But] I know it’s not going to be as bad as when you came out.”

Sometimes I think that the homophobic stories about the family that I share with her make me sound like a serious Debbie Downer. But Olga assures me of their worth. “They’ve been a tool for survival. Those traumatic things you had to go through made me conscious of the repercussions of me coming out,” she says. “And now that I’m moving back in with him, I’m obviously not going to tell him.”

“I’m closer to not telling him right now.”

After we gas up in Fort Stockton, Olga is again quiet. She seems happy to be coming home. Then, like a Quentin Tarantino film where the same story gets told from another character’s perspective, she tells me about a letter she misplaced at Grandpa’s 2013 funeral. Through residual tears she explains that the letter was her personal statement. In it, she outed herself to Grandpa and explained how he was the inspiration for her chosen field of study. “It was the hardest personal statement I ever had to write,” she says. “I left it lying around ’cause I was trying to organize the slides for the presentation.”

“Jade, he’s dying!” she screamed. “You don’t know how many days he has left!”

Dad picked up the note while she was in the next room.

“‘Like, oh, my God! I was fucking terrified! I was like, ‘God dammit! We’re at a funeral and we have to bring up this shit, too?’ Everyone thought I was crying about Grandpa but I was crying because I thought Dad read the letter because he was like, ‘Whose is this?!!!’”

She imitates his seething voice very well. She’s convinced that Dad read the letter but didn’t say anything to her. “In that letter, I fucking out myself. Part of your personal statement is talking about where you come from and who you are,” she explains. “And that’s how I opened it up. Everything that’s fucking real is in that fucking letter.”

She says that until this moment, she’d forgotten about the experience. “Dad is like me,” she says hoydenishly. “He’ll put things [so] like it never happened.”

If I know my father from my childhood, he read the letter.

“It was so fucking personal. It was just the most poetic, academic thing I’ve ever fucking written. That’s probably what’s hard for me, that I’m not out and I can’t talk about this shit.”

When I remind her that it is possible that he didn’t read it she presses the weight of her head deep in the passenger seat, then turns towards me.

“He read the letter.”

I’ve never heard such gravity in her voice.

After the graduation ceremony luncheon the day before, my stepmother began to take pictures of everyone. She started with my three sisters. Then she said, “Now all the children!” That was a summons only to me. Uncomfortably, I took my place behind my whole sister and popped my head over her right shoulder as I often do in these types of photographs.

She snapped away. Then she shouted, “Stay there! Now one with your father.” In stand-up comedy, you learn to veil panic with absolute dexterity.

“Oh, let me take the picture,” I offered in the most helpful voice I had at my command.

“No, you’re one of the kids. You need to be in the picture,” she said. Her tiny voice was hardly threatening. This was going to be easy.

Suddenly, she jerked the phone from my grasp.

“Jade, he’s dying!” she screamed. “You don’t know how many days he has left!” As I took my place and smiled, I felt like a bucket of lava was being poured slowly over me.

I later saw the photo. It’s the perfect picture of the perfect family. I can’t believe Olga’s still sitting there laughing about it, but my stepmother did make that incredibly awkward. Maybe that part of it is a little funny. There are just some things you don’t say in English immediately after lunch.

Sometimes I wonder how I would feel if he and I never reconcile.

“Like, honestly, I wouldn’t mind [if he died] ’cause then I’d feel like I could really be myself. It would hurt because I am close to dad,” she says. “But it’s harder when you just can’t be yourself.”

I feel the need to re-explain the rules of what’s on the record and what’s not. When I do, she says, “I know. This is all on.”

“Mom was curious about her, but I felt like she was more attracted to CC’s whiteness.”

Although she says her current girlfriend, Liz, is mortified by Dad, it’s actually my stepmother whom I witnessed being somewhat dismissive of her.

By the way, my sister hasn’t officially come out to her mother, either.

Olga thinks it’s because her mother preferred her last partner, CC, a British national, who also happens to be trans.

“Saying ‘I’m gay’ would be like splashing some water on their face,” I tell her as I rip open a Kit Kat. “But with CC, it was like flinging them into the Atlantic Ocean, then saying, ‘Swim!’”

“Mom was curious about her, but I felt like she was more attracted to CC’s whiteness,” she says. “She was also trying to understand why a person would want to change their gender identity in the first place.” Olga would call in advance when she brought home trans friends with a list of “preferred pronouns.” My stepmother made many mistakes with one Latina male-to-female friend named Patty. “Because everything in Spanish is so gender [specific], she kept correcting herself. ‘Do you have enough gas, mijo? I mean mija?’ Things like that.”

The moral of this story, apparently, is when you’re la consentida, you can bring transgender friends home.

I was, indeed, cupping my mouth the whole summer this was happening. I also thought of Dad, whom I hear is pro-Obama now.

Olga says Dad was cool with CC and told him stories about when he was stationed in Germany.

“I really think that Dad is changing for the better,” she says as we pass a sign that says “Entering Kerrville.”

I hope so. In the meantime, life goes on.

And I’m happy to have my sister back.

"Unimaginable," a new film by local writer-director Cedric Thomas Smith, explores the topic of domestic violence in a gay relationship....