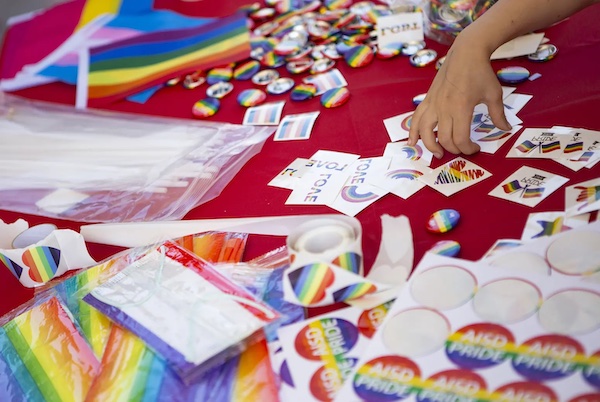 Pride flags, stickers, masks, pronoun buttons and other merch were handed out at the Austin school district’s “Pride Out!” event in March. Organizers of Pride events in Texas this month are trying to weigh a wish to celebrate their civil rights movement with fears for safety after extremists were arrested at a Pride event in Idaho this month. (Photo: Lauren Witte/The Texas Tribune)

Some LGBTQ Texans are trying to navigate plans to commemorate the catalyst of their civil rights movement with concerns about safety after 31 members of a Texas-based hate group were charged with conspiracy to riot at a Pride event in Idaho.

by Jaden Edison, The Texas Tribune

When 31 members of a Texas-based white supremacist group were arrested near a Pride event in Idaho last weekend, Mandy Giles worried about what it would mean for the upcoming Pride Houston event and her two nonbinary transgender 20-year-old children.

“It’s still scary just for them to be part of the trans community and put them in a larger LGBTQ community,” Giles, president of the LGBTQ advocacy group PFLAG Houston, said about her kids.

Before last weekend’s incident, the organization was set on participating in the Houston parade. Allies of PFLAG were invited to tag along. But then Giles realized it was important to figure out how the group was feeling in the aftermath of the arrests.

The organization had to decide whether participating in the event was even safe.

PFLAG Houston is just one of several LGBTQ advocacy groups this month weighing their safety and their desire to move forward with the events that commemorate the catalyst of their civil rights movement.

“We just keep hearing of these far-right extremists that continue to attack and demonize the LGBTQIA community,” Daniel Pacheco, co-chair of Stonewall Democrats of San Antonio, told The Texas Tribune. “It’s definitely concerning to us.”

Members of Patriot Front were arrested Saturday in Idaho on misdemeanor conspiracy to riot charges after the Coeur d’Alene police department responded to a call about “a little army” of people with masks and shields getting into a U-Haul van near a Pride event. Officials on the scene located a smoke grenade in the vehicle, along with “abnormally large metal poles and voice amplification-type devices,” according to court records obtained by KXLY News. The group members, eight of whom are Texans, have since been released on bond.

The arrests have cast worry over dozens of Pride events across Texas scheduled to take place in the coming weeks as the monthlong celebration in remembrance of the 1969 Stonewall Uprising continues. This month’s Pride falls six years after the mass shooting at Pulse nightclub in Orlando, the deadliest violent incident against LGBTQ people in American history.

Pride celebration also arrives with a warning from the U.S. Department of Homeland Security about potential violence spurring from recent and upcoming hot-button events. And it comes on the heels of Texas officials targeting trans children’s access to gender-affirming care and the LGBTQ-themed books that children can access in school libraries.

“This is something that is on our community’s mind,” Pacheco said. “We realize that we’re constantly under attack, whether it be from these movements, and I think a lot of it also stems from the words that our elected officials are utilizing. I think that’s what’s sparking, lighting the flame to this hate.”

In June 1969, New York City police raided the Stonewall Inn, a popular gay bar, setting off six days of protests. Resistance to the violent police force was led by notable trans women of color Marsha P. Johnson and Sylvia Rivera. Pride commemorates the uprising, which is largely considered the catalyst of the LGBTQ civil rights movement.

Since Stonewall, Pride has represented the “the ability to come together in a safe place,” said Ahmad Goree, director of public relations for Dallas Southern Pride.

“To fellowship together and be happy and just see that there’s other people out here like you,” Goree said. “They come from so many different backgrounds, such as career backgrounds, educational backgrounds, various parts of the United States. For all them to see that, you know, these are the same type of people as you are. And you’re able to have fun safely in this particular, one place.”

Dallas Southern Pride, which primarily serves LGBTQ people of color, is set to host the Juneteenth Unity Festival this weekend. The events will combine both Pride and emancipation celebrations. Goree said the organization has stayed in close contact with local government officials and law enforcement to ensure the safety of members and attendees.

Pacheco said his organization has spoken with local law enforcement ahead of San Antonio’s Pride kickoff event on Friday to make sure there is “adequate security for our members, for our community.”

Other organizations like PFLAG Austin were initially reluctant to make contact with police given a fraught history between law enforcement and the LGBTQ community. After the extremist activity in Idaho, however, the organization is revisiting that plan, said Anna Nguyen, the chapter’s president.

The Department of Homeland Security last week issued a warning that recent and upcoming events — including the mass shootings in Uvalde and Buffalo, New York; the upcoming U.S. Supreme Court decision on abortion access; and the November midterm elections — could be “exploited to justify acts of violence against a range of possible targets.”

Earlier this year, Gov. Greg Abbott issued a directive instructing the Department of Family and Protective Services to investigate parents who provide gender-affirming care for their trans children as possible child abuse — despite major medical associations recommending the care to treat gender dysphoria, the distress one can feel when their gender identity does not align with their biological sex. An Austin judge last week temporarily stopped those investigations for Texans who are members of PFLAG.

Texas Republican officials have also recently limited how teachers discuss history and current events. And the GOP has looked to limit childrens’ access to books with references to sexuality and race. In April, Lt. Gov. Dan Patrick said he would prioritize a Texas version of the “Don’t Say Gay” bill, Florida legislation that limits classroom discussions about LGBTQ people.

Austin Davis Ruiz, communications and marketing manager of the Montrose Center in Houston, said the advocacy organization’s members weren’t surprised by the white supremacist incident in Idaho. The rhetoric and legislation shaped by Republican state officials, he said, has “very real-world effects,” which include discrimination and violence against LGBTQ communities.

Ruiz said the Montrose Center is mapping out a plan for alternative meet-up locations in case extremist activity materializes in the coming weeks. The city is scheduled to host the annual Pride Houston event at the end of the month.

“When you see that kind of conservative effort and that kind of mass restriction of LGBTQ rights, specifically with trans people, that then has a ripple effect to communities across the country,” Ruiz said. “People feel emboldened and empowered to attack our communities, to shoot trans people, to rush Pride events and to try and cause disruption and violence. It all is interconnected.”

In 2021, Texas introduced 124 restrictive bills aimed at LGBTQ communities, including limiting trans kids’ participation in school sports and access to gender-affirming health care, according to the Human Rights Campaign. Texas was among the 22 states in the organization’s lowest-rated category for achieving basic equality.

Also last year, five LGBTQ Texans were victims of fatal violence, according to the advocacy group, making Texas among the top states for such incidents. Black trans women made up 66% of all known victims across the country since 2013.

Violence against LGBTQ people is nothing new, said Ricardo Martinez, executive director of Equality Texas. But given everything that has occurred recently, he said, “it feels so much heavier.”

Earlier this month, Republican state Rep. Bryan Slaton of Royse City said he would file a bill in the next legislative session to ban drag shows from happening in front of minors. That vow came days after a Dallas bar hosted what organizers called a family-friendly event with drag performers, according to WFAA-TV. Abbott on Sunday tweeted that he was directing the Texas Education Agency to investigate a claim by a Houston Independent School District parent who said a teacher took his underaged son to a drag show at a club in 2019.

“Given the boldness of people in positions of power threatening to take our rights away, it feels really severe, it feels deeply disturbing,” Martinez said. “When vigilantes are traveling hundreds of miles to terrorize queer people, Pride is an act of bravery. And when state politicians refuse to address the systemic violence that is happening and instead fixate on drag performers, Pride is an act of bravery. So we are being called to summon from an empty cup.”

Far-right extremists have taken the Republican-sponsored legislation and rhetoric as “a cue that they’re OK to exist,” said Michael L. Casey, secretary of PFLAG San Marcos. They said the organization will likely discuss safety plans for future Pride events in the city.

“What I find is, with these groups, they are often consisting of people that are very misinformed. And they are consciously and intentionally misinformed,” Casey said. “They are wanting to be in an echo chamber where they hear only what they think is right in the first place anyway. And I find that the state legislatures, whether they intend to or not, tend to inadvertently and indirectly endorse such extremist groups.”

PFLAG Houston ultimately concluded that individual members can decide if they want to attend the Pride event there or not. Giles, the group’s president, personally felt that attending was the right thing to do.

Because this year, it “feels more like a statement,” she said.

Disclosure: Equality Texas and Human Rights Campaign have been financial supporters of The Texas Tribune, a nonprofit, nonpartisan news organization that is funded in part by donations from members, foundations and corporate sponsors. Financial supporters play no role in the Tribune’s journalism. Find a complete list of them here.

Pride San Antonio is scheduling a diverse roster of events to wrap of Pride Month in San Antonio. "Pride Week...