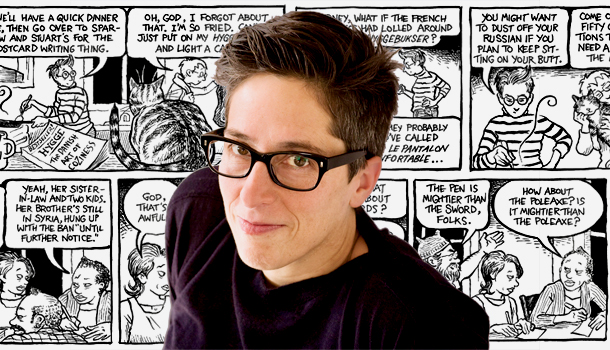 The Three Faces of Alison

For the past decades, imported British musicals seemed to rule the Great White Way. That has all changed with the rise of homegrown, groundbreaking, box-office hit musicals from Rent, Next to Normal to the recent Hamilton, The Book of Mormon, and Dear Evan Hansen, that have restored the American musical anew.

Count Fun Home as one of those original American musicals that harken to a new musical theater for the 21st century. On the surface, Fun Home, winner of the 2015 Tony for Best Musical, centers on the Bechdels, a typical American family in Pennsylvania.

Bruce, the father, is a high school English teacher who also restores antiques; their home doubles as the Bechdel Funeral Home. His wife Helen is an unfulfilled actress and housewife who cares for their three children. The opening number’s lyrics state: Welcome to our house on Maple Avenue / See how we polish and we shine / We rearrange and realign / Everything is balanced and serene / Like chaos never happens if it’s never seen.

Part of that hidden “chaos” is revealed early on. Alison, the 43-year old cartoonist, who is also portrayed as her little self and her medium self in the play by other actors, is gathering material for a graphic memoir of her life, especially her relationship with her somewhat distant, persnickety father: “Caption: My Dad and I both grew up in the same small Pennsylvania town. And he was gay. And I was gay. And he killed himself.”

The play doesn’t follow a strict linear motion, even the music is folded into the dialogue and often glides with precision its reoccurring leitmotifs. This is a memory play but unlike Tom in The Glass Menagerie, Alison is not a narrator, but an observer in the present trying to ferret out what occurred in the four months after she came out, and ended when her father took his own life. In the process, she relives her childhood, her coming out as a lesbian, and the unanswerable questions of her father’s hidden life. Lisa Kron in writing the musical’s book and lyrics follows playwright Thornton Wilder’s wise dictum: “On the stage it is always now. The personages are standing on that razor-edge, between the past and the future.” In Fun Home, we watch characters as they move forward in time. Both the audience and the Bechdel family are unaware of what will ultimately be revealed since they are living in the present.

For those who might wonder how a show about a dysfunctional family works as a musical — one might consider Pulitzer Prize winners Next to Normal and Paula Vogel’s How I Learned to Drive. And while the musical is set in a funeral home, it isn’t any more off-setting than say The Addams Family.

Granted, the play is the first Broadway musical to have a lesbian protagonist and lead. Fun Home also won the Tony for Best Original Score, making Lisa Kron and Jeanine Tesori the first two women to win in that category. And of course, the play is based on the graphic novel by Alison Bechdel who subtitled her work A Family Tragicomic.

It’s hard to imagine that a musical with a lesbian coming of age story was possible just a few years ago. Local audiences have a rare chance to see this challenging, groundbreaking musical. It is also an opportunity for theatergoers to see a musical that wisely shows that family ties, secrets and finding one’s identity occur in all families.

Fun Home binds us together in an original dazzling work of musical artistry.

Days after former FBI Director James Comey was fired by President Trump, he and his wife attended a performance of the Broadway touring production of Fun Home at the National Theater in Washington, D.C. Unlike the earlier presence of Vice President Mike Pence at the Broadway hit Hamilton, where its cast offered a strong message to the incoming administration, Comey’s presence took the Fun Home cast by surprise. “We were thrilled,” recalled Anthony Fortino, the dance captain for the touring show. “He and his wife came backstage and thanked us. We later learned he had been moved to tears by the show.”

The cast, however, reacted to the Trump victory by having Kate Shindle, who portrays the adult Alison in Fun Home, deliver an on-stage message for the Broadway Cares / Equity Fights AIDS: “We have never been more committed in our fight for those whose voices have been silenced or marginalized. We will not allow fear or hate to impede the progress we have made. Lives depend on that.”

Of recent Broadway shows, Fun Home has been the most proactive in the theater community. During its Tony-winning run on Broadway, the entire cast gave up their Monday off after the news of the Pulse nightclub tragedy broke. They flew to Orlando and performed a concert version of the show to raise funds for the victims and to share with Orlando and the LGBT community.

I first saw Fun Home on Broadway with its original cast. The staging at the Circle

in the Round Theater immersed the audience in an intimate space. For the touring show, director Sam Gold (The Flick, A Doll’s House, Part 2) has redesigned it for proscenium staging. “It really works well,” Fortino said. “You get to engage with the characters face to face.” As dance captain, Fortino oversees that the show’s choreography remains consistent and provides a warm-up routine with the children in the cast who perform several musical numbers that ape 1970s-era shows like The Partridge Family. He also portrays one of the underage young men Alison’s father seduces.

The show has been highly successful during its run, but not without controversy. In her review of Fun Home, Houston Press theater critic Jessica Goldman questioned why the Bayou City audience was sparse and why many left after Alison’s coming out. “So I suppose it was the story itself? A discomfort with a lesbian as a main character? Or the suicide of a gay man?”

The touring production also had a run-in with a feminist blogger who wrote that the character of adult Alison had been “de-butched” to make her more acceptable to straight people but was alienating lesbians. The new Alison didn’t match the butch dyke that young Alison sings about in the show-stopping “Ring of Keys.”

The play’s writer and lyricist Lisa Kron wrote an open letter defending the decision. “The producers, the creative team, and I have never stopped our guardianship of the queer, feminist, lesbian, middle-aged, art-making, truth-seeking heart of our show. I love Kate’s version of Alison. I feel good about the change in her costume. You may disagree. But was this decision, or any other, ever made to “de-butchify” the show? No way. Not on this femme’s watch.”

For Fortino, the success of the Fun Home tour belies the show-biz naysayers that had predicted the show would be a difficult sell in mid-America. “We’ve had great audiences,” Fortino, who is a Kansas City native, enthused. We hit the million-dollar mark at [Durham, North Carolina’s Performing Arts Center]. And the tour has been extended through December.” (The musical’s production company in a statement said their investment had been recouped in May of this year.)

And what are Fortino’s plans for the future? “I will go back to New York City and perhaps return to my old job as a full-time accountant. And do auditions that might interest me. I went to college at TCU in Texas. It was the best move for me. I was engaged in the regional theater scene in the Dallas-Ft. Worth area. I learned a lot and decided musical theater was my goal. So, in between shows, I have my plan B to fall on since I majored in accounting. It pays the rent.”

Gregg Barrios is a playwright, poet and journalist. He is a 2017 NEH Harvard Fellow. He is working on a new play under the auspices of Harvard’s American Repertory Theater.

Originally published in the San Antonio Current. River boat operator Tom Vanzandt was guiding his boat under the Houston St....