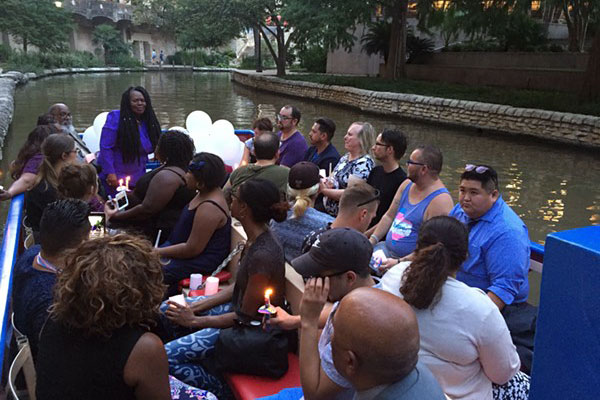 River boat operator Tom Vanzandt was guiding his boat under the Houston St. bridge April 9 when he was flagged down by a River Walk employee. “There was something in the water,” Vanzandt said Tuesday, solemnly thinking back to the spring morning. “A mass of brown hair. I thought someone’s pet had drowned. Not a human.”

The person he found floating face-down in the murky water was Kenne McFadden, the 12th trans woman in the country to be killed this year. San Antonio police ruling her death a homicide by drowning, and are still working to pin a charge on a “person of interest.” They are investigating whether or not she was targeted for her gender identity.

On Tuesday evening, what would have been Kenne’s 27th birthday, Vanzandt steered his boat to that exact spot with Kenne’s family, friends and LGBT advocates. In a barge decorated with white balloons, the group held candles representing the 15 other trans women who’ve been murdered in 2017.

“One of these candles is for me, and the other is for my baby,” said Joanna McFadden, Kenne’s mother, who sang one of her daughter’s favorite songs at the spot where she died. Many guests left the evening boat vigil in tears.

“We want awareness today, we want to have eyes on what took place here,” said Charlie Jones, Kenne’s uncle. “No matter who you are, no matter what you are, you are entitled to a life. We don’t judge.”

When Kenne was found in April, the San Antonio police identified the body as 26-year-old black man named Kenneth. It took the local LGBT community — and the general public — two months to realize that Kenneth was actually Kenne, a trans woman.

“Trans violence and trans phobia is at an all-time high right now…it’s a full-on assault,” said Gilbert Martinez, head of PolitiQueers, a politically-minded local group of LGBT activists. “As a gay man, I realize how much privilege I have in comparison. Their very existence is under attack. We have to stand up.”

Drag performer Delighted Tobehere, the self-described "Queen of All Trades," will headline a benefit for the Thrive Youth Center on...