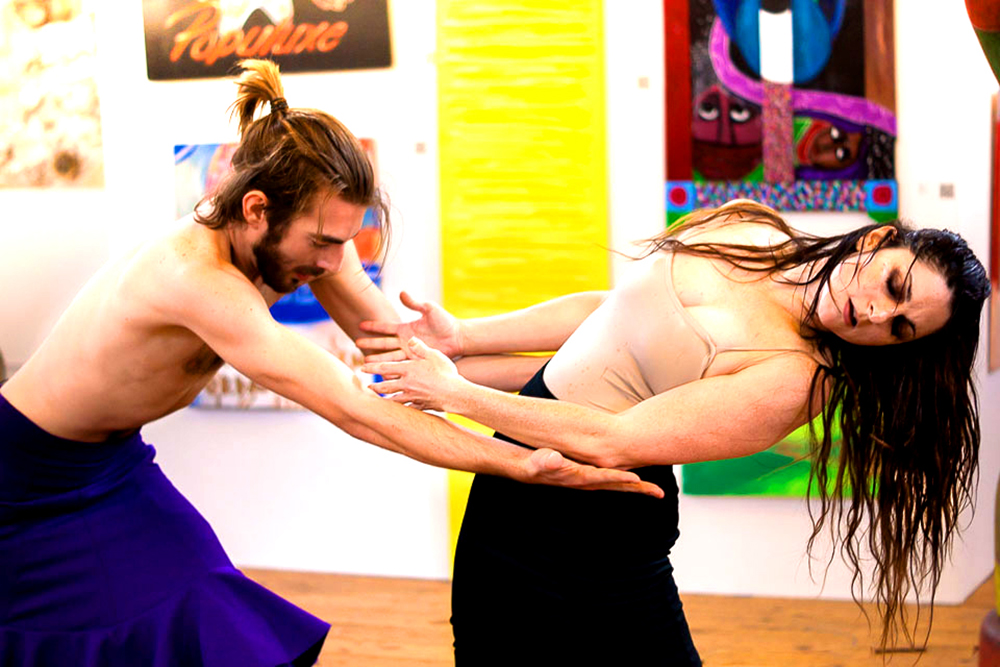 Stephan Gaeth and Tamara Adira performing Angel of Gravity in 2014.

In the year since Arte y Pasión premiered Angel of Gravity, an experimental project that paired modern dance, flamenco, and classical Spanish dance, the collective has continued to embrace multidisciplinary collaborations and performances. Out In SA spoke with dancer and artistic director Tamara Adira as she reflected on their upcoming production, Algoritmos.

“Everybody gets criticism for whatever they do if they stick their neck out, no matter what,” Adira said. “And I figured, if I was going to stick my neck out, I might as well really enjoy myself.”

From 2010 to 2012 Adira produced several large-scale performances featuring such internationally renowned flamenco dancers as Antonio Arrebola, Teo Morca, and the late Timo Lozano. After she teamed up with modern dancer Stephan Gaeth in 2014, the tone of her performances changed significantly.

In February of that year, she performed several numbers during an art opening at Bihl Haus Arts, offering a sneak peek into the work that would eventually develop into the full-fledged Angel of Gravity. Adira and a shirtless Gaeth donned dresses with long trains in what became the dance couple’s first collaboration. Together, the dancers moved passionately throughout the small gallery to the tune of a live violin as viewers cleared the way. This was not the flamenco Adira had become known for, but a modern-dance performance encompassing elements of classical Spanish dance.

“I choreograph either flamenco pieces or compositional pieces,” Adira explains. Rather than mixing or fusing various dance styles, a production by Arte y Pasión may “juxtapose” flamenco choreography with other dance styles and disciplines. “What’s really funny is that I had more people say, ‘No, you can’t do that,’ when I was trying to do things like everyone else,” Adira says, laughing. “So when I started with Angel of Gravity, and I choreographed the piece with the two batas, everybody got really quiet, or they didn’t say anything to me, anyway.

“For me, experimenting was not about experimenting; it was more about being authentic. Because I think I was just trying be something I wasn’t before. I just decided I’m not getting any younger, and I’ve been spending a lot of time trying to please other people instead of trying to please myself.”

Adira has been dancing since the age of 4, but it wasn’t always flamenco. “My base is in classical ballet. A lot of people who are performing today got their start in flamenco when they were kids, but I did not,” she says. This presented her with many challenges. “ … If you’re so fascinated with an art form like flamenco, which is completely different from classical, you really have to humble yourself and start at the beginning and be willing to place yourself in a vulnerable position. Even though you’ve had a lifetime of dance, it really doesn’t mean anything. So when I was an adult, I had to start over.”

Adira was living in New Orleans some 15 years ago when she saw her first flamenco teacher, Houston-based dancer Solangel “Lali” Calix, perform at the Red Room. “She was the person who introduced me to flamenco,” Adira says. “It was kind of like a mosquito bite at first, and then it just set me on fire, and it wasn’t really a choice anymore.” With the 2010 production Generaciones, Adira paid tribute to her superiors in the flamenco world, dancing alongside Calix and several of her former instructors.

Later this year, Adira will embark on a new production called Algoritmos, Spanish for algorithms. “I’ve always been fascinated about the math behind music,” she says. Adira isn’t simply talking numbers here, but spirituality—the divine intelligence behind music, nature, and our very existence. “If you look at the molecular structure of tears, you can actually see that when we cry, our tears have different molecular shapes based on how we feel, whether we are feeling frustration, or joy, or sadness, or grief,” Adira said. “So this is not in any way to diminish how we feel as people, or take away from how we feel about our spirituality, but to really give credence to it. Because what we feel is definable. The human spirit itself and our feelings can be measured and expressed.”

With Gaeth once again as Adira’s main collaborator, the complete lineup of dancers and musicians is still in the works, but Adira plans to continue on the road she blazed in Angel of Gravity. “What I have come to enjoy doing is this: I really enjoy working with people from different disciplines because when we get together, we never know what’s going to happen,” Adira says. “So there is always an element of the unknown; of the unpredictable. But at the end of the day, we all have the same goal.” The San Antonio LGBT Chamber of Commerce was the recipient of a  DiversityFirst award from the local chapter of the...