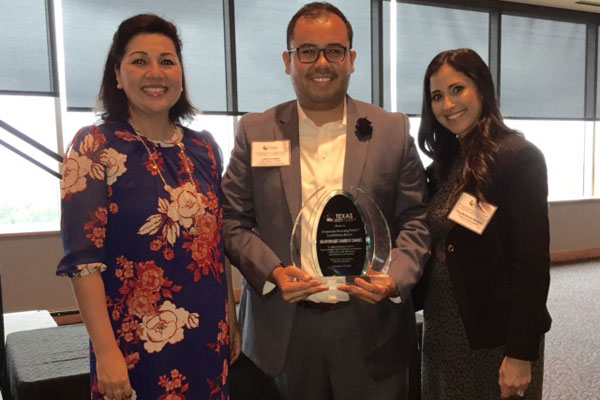 The San Antonio LGBT Chamber of Commerce was the recipient of a  DiversityFirst award from the local chapter of the Texas Diversity Council at their awards luncheon on November 10 at the University of the Incarnate Word’s Rosenberg Sky Room.

The Diversity Council’s award program “recognizes individuals, community groups, nonprofit organizations and business establishments across the legal, academic, corporate and health sectors that have demonstrated outstanding achievements and sustained commitment to the pursuit of cultural diversity and inclusion in the community and workplace.”

“We are honored to have received the 2015 Corporate Achievement DiversityFirst Award, in acknowledgment of our chamber’s commitment to the pursuit of cultural diversity and inclusion in the community and workplace,” Luis Vasquez, president of the LGBT Chamber told Out In SA.

The City of San Antonio also received an award in acknowledgement of the creation of the Diversity and Inclusion Office earlier this year. A press release explains:

Created by the City Manager in May 2015, the City of San Antonio’s Diversity and Inclusion Office exists to cultivate an environment of respect and inclusiveness among the diverse populations of San Antonio as a means to advance the growth, stability and strength of the community . . .

“We know we are a stronger, more professional team when we respect and welcome one another’s differences,” City Manager Sheryl Sculley said. “In partnership with stakeholders, we are committed to innovating in the field of diversity and inclusion and building San Antonio as a national leader.”

Awards also were given to SeaWorld and Aquatica Texas. Individual awards were given to representatives from Toyota, Hill Country Bakery, the University of Texas Health Science Center at San Antonio, and Christus Santa Rosa Health Systems.

There also was a presentation by Jeri George, the interim vice president of human resources for Goodwill Industries in San Antonio, who addressed the topic of Mixing and Managing a Multigenerational Workforce.

Keynote speaker for the luncheon was Jeffrey Arndt, president and CEO of Via Metropolitan Transit.

The TXDC has councils in Austin, Dallas, Fort Worth, Houston, San Antonio, and Corpus Christi.

The Metropolitan Community Church will once again host the annual Transgender Day of Remembrance observance in San Antonio on November...