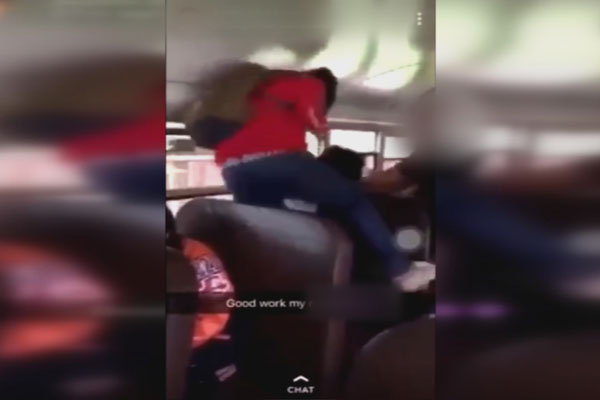 A quick Snapchat video taken last week shows a Louis D. Brandeis High School student being beaten up on a bus. The victim said he was targeted for his sexual orientation.

Three students are facing disciplinary action. Northside I.S.D. officials are continuing to investigate the incident to determine whether to take more action.

Barry Perez, executive director of communication for the school district, said the video is “one small piece of what the campus is looking at.”

News4SanAntonio’s report shows the 8-second clip at the center of the investigation.

Perez told KENS5 that the driver stopped the bus and “took appropriate action to get additional support there.”

The victim’s family has said otherwise. They said no one intervened while the victim, a 15-year-old student, was being beaten. The family has hired attorney Gabe Quintanilla.

Perez said he would be “cautious” to say the incident was a form of bullying until the investigation was complete.

Quintanilla disagrees. “There’s no question it’s a bullying incident,” he said. “You have a group of kids, surrounding another child, taunt him and call him a f——t.”

The attorney believes the homophobic slurs and the actions seen in the video are enough to prove Ortiz was bullied for his sexual orientation.

“That’s harassment by any stretch of the imagination,” Quintanilla said. “I think any jury would believe, agree with that as well.”

A San Antonio pastor, who for years has fought against LGBT equality, is encouraging his followers to vote "for" Propositon...