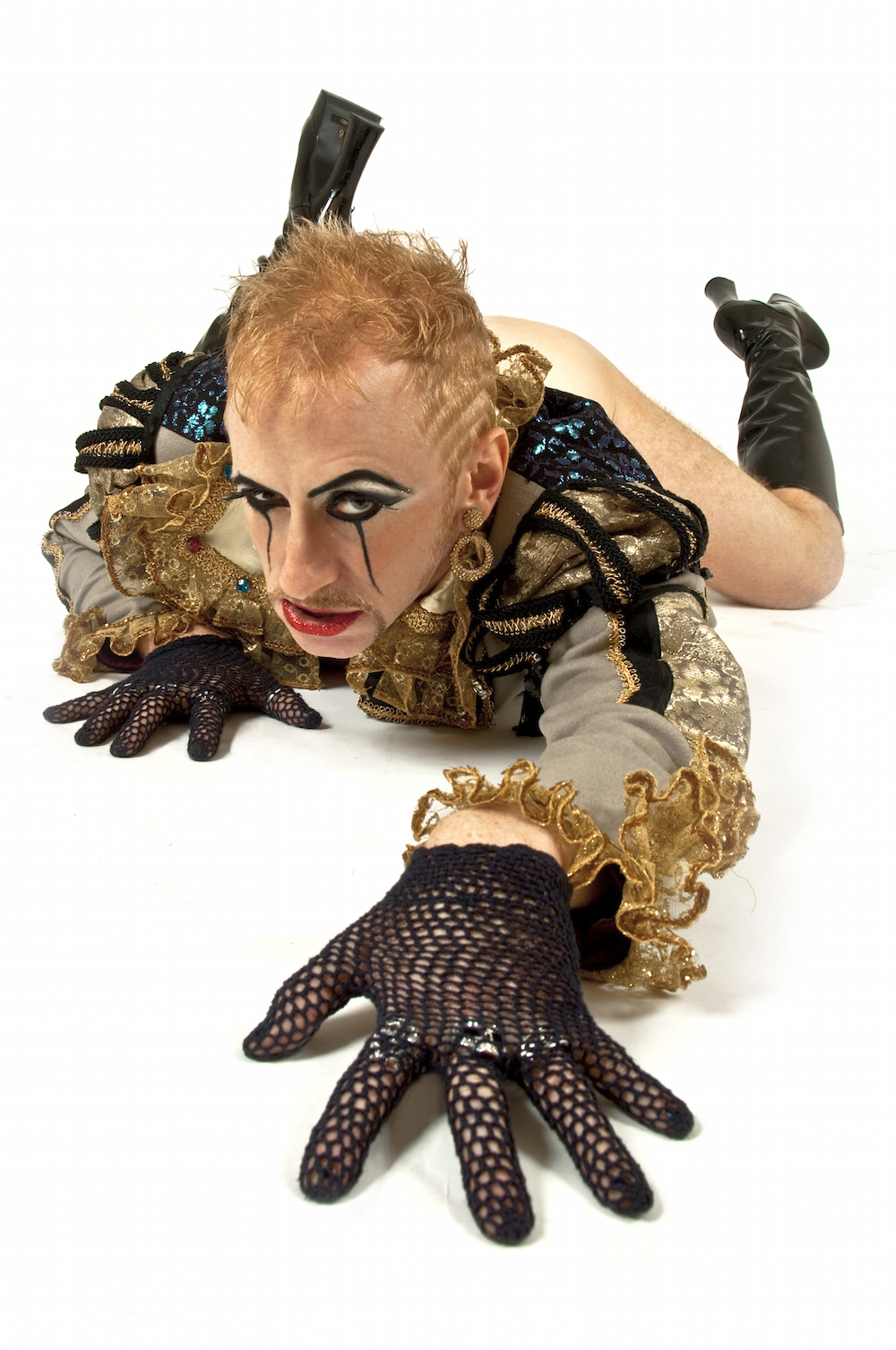 “It makes sense that you want to hear from all genders. There are more than two.”

Tigger!, the 50-year-old burlesque godfather who’s making his Texas debut as tonight’s headliner for the 4th Annual San Antonio Burlesque Festival, has always been wary of confining himself to gay audiences, so his crowds have often been a mixed bag. And during his 23-year career as “a naked actor,” he’s found that when gay men are among their female friends the energy in the room becomes noticeably varied. “If straight guys are there, too, everyone has to loosen up a bit more,” he adds.

It’s in these types of environments that Tigger! thrives. The global change he’s always hoped to inspire through striptease is a shift in “who people are hanging out with.” And a boylesque performance should be “appealing to that range of people when that range of people are together.” Gender and gender-orientation diverse audiences “laughing at sexuality and gender together” in a live public performance is an ideal situation, one Tigger! could never have experienced had he stayed in his “comfy little ghetto.”

Tigger!–whose artistry supersedes his sexual identification–has performed in gay venues as a guest in shows hosted by burlesque giants Dirty Martini and the charismatic World Famous Bob. He continues to support them to this day. “They are much better faggots than me,” he says via phone from New York, shortly before a tech rehearsal for “Karaoke Bacchae.”

The social politics of gay male culture can serve as a firm blockade to young, emerging artists who feel they can only find performance opportunities in LGBTQ venues. “A group of just gay men watching another gay man perform can get a little judge-y,” Tigger! says. “‘He’s not a go-go boy … .and he’s not a drag queen … [the performance] is something in between. I don’t understand what this is supposed to be.’” This sounds like a vivid recollection.

Calendar editors, however, need something to work with and the description he gives his act is deceptively simple: “Sex plus humor, plus self-expression.” But does this holy trinity bear the mark of what die-hard fans might call “true burlesque?”

Tigger! lets out a deep sigh over the sounds of a New York City street. “I think anytime someone starts talking about ‘true burlesque’ I’m probably gonna get a little nauseous,” he says, with an almost audible show shake of the head. “True burlesque is expansive and inclusive and can include things that I have not begun to imagine yet.” Tigger! feels the genre is here to open doors that have long been shut. “Anyone who’s closing the doors is working against us and they’re against the revolution.”

“I think anytime someone starts talking about ‘true burlesque’ I’m probably gonna get a little nauseous.”

A burlesque revolution that perhaps redefined itself when Tigger! was crowned the first-ever Mr. Exotic World in 2006 at the annual Burlesque Hall of Fame Weekend in Las Vegas.

He speaks of the burlesque renaissance of the 1990s that lead to his big moment with a fondness that makes it clear that he never saw it as a revival. “The whole reason we refer to the Golden Age of Burlesque was because they were doing exciting, contemporary art for their time,” he says. Revivalism, he feels, is “boring, uninteresting and not art’s job.”

But as the commercialization of the burlesque industry struts downstage, there’s a stark difference in the minds of observers  between “classic burlesque” and “neo-burlesque,” which Tigger! considers an artistically dangerous and “false distinction.” “It’s an artist’s job to respond to the world we’re living in, so whatever techniques you’re using to do that [is] fine,” he says.

Tigger! sees beauty in the fact that burlesque welcomes performers from almost every conceivable discipline, from juggling to magic to ballet to singing. This year, the festival had to relocate to the Woodlawn Theatre because the last venue, the Josephine Theatre, wasn’t equipped to handle aerialists, according to co-producer Rose Muñoz.

In the early days of his career, Tigger! was tapped by noted performance artist Penny Arcade to join the internationally touring production of her show “Bad Reputation,” which could have been the spark, but not necessarily the fire, that ignited his lifelong, boylesque adventure. After a tour of Europe and Australia, Tigger! had, by his own account, put in well over a thousand shows. “I got my stripper chops doing that,” he says.

But he found his return to the New York theatre scene “frustrating” after that whirlwind experience. Although he was go-go dancing and did sex shows on the side, his desire to inject more “excitement and humor” into his theatrical work was starting to keep him up at night. This inspired him to create “strip performance art,” which is what he called his glittery conceptions before burlesque was ever on his radar.

What he said then he continues to say in diverse ways almost a quarter of a century later, having also paved the way for boylesque stars like the prolific Chris Harder, who consider him “a leader for all performers” regardless of “the pronoun you attach to the ‘lesque.’”

“If you’re going to stop with baggy-ass boxer shorts, why are you on the goddamn stage?”

“As with any genre, any art form, if we’re doing our job right there should be someone in the audience every single fucking show saying, ‘Wait a minute, I want to do this!,’” Tigger! says. “[Burlesque] was always meant to be accessible. It’s a working-class art form.”

Tigger! believes that the term ‘boylesque’ is an “arbitrary and irrelevant distinction,” that burlesque should be playing with gender stereotypes and sexuality. “It makes sense that you want to hear from all genders,” he says. “There are more than two.” But he isn’t shy about giving advice to up-and-coming boylesquers. “If you’re going to be a man in this world, you’d better step up [and] work every bit as hard [and] get every bit as naked,” he says in a weighted tone. “If you’re going to stop with baggy-ass boxer shorts, why are you on the goddamn stage? Get the fuck off.”

Because it’s still “a man’s world” at the end of the day, he admits that male burlesque performers “can be lazier.” But there seems to be a gradual change on the horizon as new boylesque festivals pop up in cities like Seattle, New Orleans and Vienna. Tigger! says he felt a bit of relief when acts like Chicago’s Stage Door Johnnies and Harder appeared on the scene. No longer did he feel the need to “fight for the existence of boylesque.”

Now dubbed “The Godfather of Neo-burlesque,” Tigger! should be allowed to focus more on the art again. When he performs Saturday in SA, he’ll be keeping a promise to himself to keep exploring new things and “challenging himself.” In fact, he went skydiving for the first time last week.

“I’ve been talking about that for almost 30 years!” he says enthusiastically. “I dropped 10,000 feet yesterday.”

Although same-sex couples can now marry across the United States, LGBT people are still vulnerable to discrimination without federal anti-discrimination...