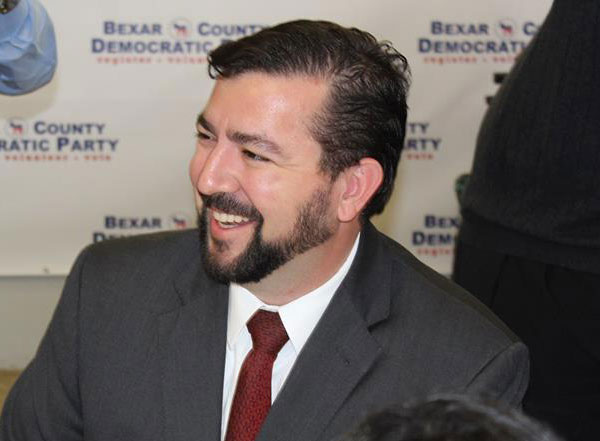 Democrat John Bustamante is running for Judge of the 45th District Court. He's been endorsed by the Stonewall Democrats of San Antonio. (Courtesy photo.)

38-year-old John Bustamante is a graduate of the Massachusetts Institute of Technology and the University of Texas Law School. He practices law in San Antonio and Austin. His legal specialty is patent litigation. He has also practiced in criminal and family courts.

Bustamante is running for 45th District Court. It is the bench being vacated by Judge Barbara H. Nellermoe, who was elected in 2003. Nellermoe is an ally who has the reputation for being a fair-minded arbiter when dealing with LGBT litigants, especially in cases of child custody, adoption and transgender name changes.

In an interview with QSanAntonio before the 2012 Democratic primary, when he ran unsuccessfully for Texas’ 23rd District Congressional seat against then-State Representative Pete Gallego, Bustamante expressed support for marriage equality and a fully inclusive ENDA. The Stonewall Democrats of San Antonio endorsed him in that race and have done so again for this election.

Bustamante’s opponent in November election is Republican Stephani A. Walsh, a trial lawyer who was endorsed by the San Antonio Express-News. Despite having 25 years of courtroom experience, Walsh has been reprimanded twice by the State Bar of Texas, with a six-month probated suspension in 2002, a detail omitted in her Express-News endorsement.

Bustamante is the son of Albert Bustamante, the San Antonio Democrat who served as Congressman for the 23rd district from 1985 to 1993. The elder Bustamante left office under a cloud of scandal after he was convicted of accepting bribes and racketeering which resulted in a 42-month prison sentence.

Despite his father’s troubles, Bustamante says there were positive influences as well.

“Certain people have a very dim view of my father. However, to be honest, growing up and seeing how my father affected people’s lives, that’s my inspiration. He was one of those people who go and reach out to communities and really try to make their lives better,” he told QSanAntonio in 2012.

“If people are going to judge me on 20 years ago and what happened to my father, they weren’t going to vote for me anyway,” he adds. “One benefit of growing up in a political household is that you learn to get a pretty thick skin.”

What are the primary issues that this judgeship would deal with?
The 45th District Court, like all civil district courts in Texas, hears and adjudicates matters involving more than $200 in controversy, divorces, child custody issues, contested election matters, and matters involving title to land. This means the court is entrusted to determine many matters that are most dear to the people of Bexar County: their families and their homes.

What in your background and work experience qualifies you for the position?
There are three major elements I believe the people of Bexar County should look for when selecting the next judge in the 45th District Court.

First, education. I am a graduate of the Massachusetts Institute of Technology with a bachelor of science in Brain and Cognitive Sciences. I earned my law degree from the University of Texas School of Law, where I was the Managing Editor of the Review of Litigation in 2003.

Second, experience. At Fish & Richardson, one of the top patent litigation firms in the country, I worked on some of the biggest patent trials to date, with far reaching implications for the field of intellectual property law. In my current solo practice, I represent parents and children in abuse and neglect cases. While a majority of cases that come before the 45th district are family law, the experience I have had in federal courts throughout the country, at the International Trade Commission, and in the variety of cases I have tried here in Bexar County ensure that I am prepared to handle any case that may come before me in the 45th District Court.

Third, integrity. I have no history of grievances or malpractice suits. By contrast, my opponent has been subject to a public reprimand by the State Bar of Texas, has had her license suspended by the State Bar of Texas, and has been sued a number of times for malpractice. The people of Bexar County deserve a judge who has demonstrated integrity throughout his or her career.

What endorsements have you received?
I have been endorsed by the Stonewall Democrats of San Antonio and enjoy the support of many former federal law clerks, general counsel of companies throughout the state, large firm lawyers and trial lawyers here in San Antonio.

Any words for the voters regarding the November election?
This election is critically important to all the people of Bexar County. This is especially true when it comes to the election of our civil judges, as they determine matters as personally intimate as what happens when one divorces, with their children, the ability to adopt a child, whether justice is done when a person or company negligently injures another person, and whether a person facing foreclosure loses their home. These profoundly personal issues are those faced by civil judges every day. When we elect those who determine these cases, we ought to look at their education, their experience and their integrity.  Given my background, and the clear difference between my opponent and myself, I believe the choice is clear in this election – and that’s why I’m asking for the support and vote of all the people of Bexar County.

Equality Texas executive director to appear on ‘The Daily Show’

“The Daily Show with Jon Stewart” will travel to indicted Governor Rick Perry’s backyard later this month to broadcast a...