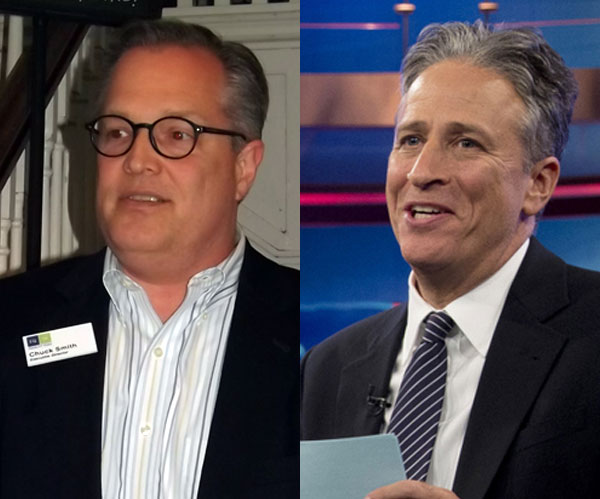 Equality Texas executive director Chuck Smith will make a guest appearance on "The Daily Show with Jon Stewart" when it broadcasts from Austin later this month. (Photos: Smith/QSanAntonio. Stewart/Comedy Central.)

“The Daily Show with Jon Stewart” will travel to indicted Governor Rick Perry’s backyard later this month to broadcast a week of shows covering the midterm elections. One of the guests on the show that week will be Chuck Smith, executive director of Equality Texas.

A press release distributed by Comedy Central this week touts, “The Daily Show with Jon Stewart hits the road to cover the midterm elections in Austin with Democalypse 2014: South By South Mess.” The programs will air Monday, October 27 through Thursday, October 30 at 10 p.m. on Comedy Central.

In a Facebook posting on October 9, Smith wrote, “So this is happening: About to film a segment for The Daily Show with Jon Stewart. Please pray that you’ll laugh with me and not at me!” According to Smith’s post, the taping took place at Wooldridge Park in Austin.

During its stay in Austin, The Daily Show will be taped at the Zach Theatre located at 202 South Lamar Boulevard. Tickets for the tapings are available on the show’s web site, not through the Zach’s box office.

No confirmation yet on which night Smith’s segment will air.

Tragic end to story of child adopted by gay couple

The tragic story of a three-year-old girl who died while under the care of her adoptive fathers came to an...