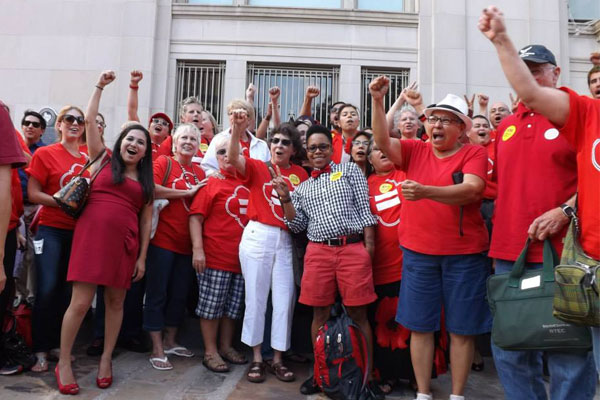 Members of CAUSA celebrate outside City Council chambers after NDO was passed in September 2013. (Photos by Antonia Padilla)

The leadership team of CAUSA (Community Alliance for a United San Antonio) recently sent an email to its membership saying it will no longer hold regular meetings.

The email was sent on October 21 and outlined how CAUSA is scaling back for now:

First, we would like to thank each of you for your dedication and work for equality in all its forms. Together, we have continued to change San Antonio for the better.

Second, we wanted to inform each of you that at this time, CAUSA will no longer meet regularly as a coalition, but instead will come together as issues arise in our city, county, and state.

We hope that when we reach out to you again, you will be just as willing and ready as you have been thus far, to step up for equality.

Our social media outlets will still be up and running, so feel free to post [on our Facebook page] if you have community events to share . . .

Robert Salcido, who’s a member of the CAUSA leadership team, told Out In SA that a couple of factors influenced the group’s decision to limit meetings with members. The first being that CAUSA chair, Andrea Figueroa, had to step down because she was recently promoted and her job as executive director at the Martinez Street Women’s Center would be taking more of her time. Secondarily, Salcido says that even though CAUSA was scheduling meetings, many times only the leadership team and a few members attended. He echoed CAUSA’s email saying that at present, there is nothing on the agenda which requires engaging the group’s vast coalition.

When asked about CAUSA’s previously-stated intention to advocate for a citywide employment nondiscrimination ordinance, a missing component from the current NDO, Salcido says the timing is not politically advantageous at the moment but it is still one of the coalition’s goals. He says the leadership team will continue to meet periodically to work on issues which affect the community. The force behind the NDO

CAUSA was formed in the summer of 2011 when community activists including Randy Bear, Richard Farias, Dan Graney and others began meeting to explore the possibility of changing the city code to include protections for LGBT citizens.

CAUSA’s success was due in large part to the diverse coalition it formed from within the LGBT community, straight allies, the business community, local, state and federal politicians and LGBT-friendly churches and pastors. Even the Spurs and the San Antonio Express-News publicly supported the ordinance.

“It has been a long, hard struggle, but we are happy that truth, justice, fairness and equality have prevailed and that San Antonio has joined the 180 other cities across the country who treat their LGBT residents with dignity and respect. Now the time for healing has begun and we invite those who opposed this ordinance to meet with us in the spirit of forgiveness, reconciliation and mutual education,” Graney said at the time the NDO was enacted.