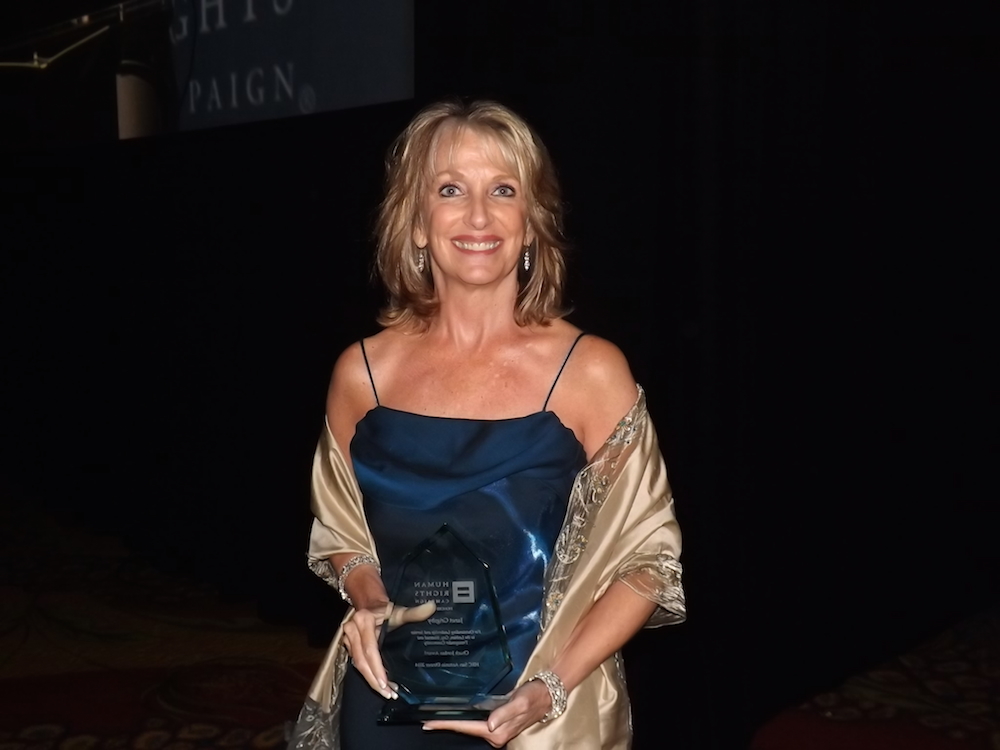 Janet Burrage Grigsby says she’s always been a passionate advocate. Women’s reproductive rights, at-risk youth, LGBT equality, and the Democratic Party platform are among the issues that get her enthusiastic attention.

Grigsby’s efforts go well beyond lip service. She gets involved in public activities and isn’t afraid to take leadership roles. That is no doubt why on November 8 the San Antonio chapter of the Human Rights Campaign presented her with the Chuck Jordan Award for lifetime advocacy.

“I did not have the pleasure of knowing Chuck Jordan, but I will work hard to honor his legacy and the spirit of the award,” she said shortly after HRC announced the honor in late October.

Jordan, remembered as a pioneer gay-rights activist in San Antonio, was one of the first members of the Alamo Business Council and in 1989 co-founded of the San Antonio Black Tie Dinner. In 1991, he helped establish the HRC’s National Board of Governors and served for two years as a national governor. He died in 1997.

Grigsby hails from Waco but has lived in San Antonio for the past 23 years. She’s been married for 33 years. Although retired now, she was a licensed professional counselor in private practice who for a time also worked in marketing and public relations. She’s currently chair of the Leadership and Advocacy Council of Planned Parenthood Texas Votes, which campaigns for candidates who “support reproductive justice.”

She worked on the Leadership Committee of CAUSA (Community Alliance for a United San Antonio), and served as executive director of StandUp For Kids for four years, during which time the organization was recognized by the White House for its efforts to end youth homelessness. As a member of the San Antonio chapter of PFLAG, she served three terms as board secretary. Last month, she was block-walking for Democratic gubernatorial candidate Wendy Davis.

In 2013, Grigsby moderated a community discussion at the Main Library–Standing out: Spelling the ‘T’ in LGBT–that dealt with gender identity and expression.

“I have to believe wholeheartedly in the cause,” Grisby said, explaining how she chooses her advocacies. “Their goals need to be clear and well-researched, they need to utilize volunteers’ time and energy well, and they need to be able to self-assess, learn, and change where needed.”

Grigsby’s support for LGBT equality is personal; she has a 25-year-old son who is gay. “I have always supported the LGBT community, but there’s no question that having a gay child, who is denied the same rights as every other American citizen, is a fierce driving force behind my advocacy work.”

Her advice to parents of LGBT children: “Love them, be their strongest advocate, be willing to abandon any friend or family member who treats your child disrespectfully because they are lesbian, gay, bisexual, or transgender. If you’re having trouble accepting your child’s sexual orientation, educate yourself about human sexuality, go to PFLAG meetings and get counseling, because the problem is yours, not your child’s.”

Grigsby’s work with PPTV goes hand in hand with her support of political candidates who support women’s reproductive rights. One challenge is getting the support of all women, not just those who are Democrats.

“There are Republican women who will absolutely vote across party lines on the issues of choice and equality, but in today’s political climate, they may not tell their family and friends how they voted,” Grigsby said. “As for the remainder, women who consistently vote against their own best interests often aren’t  reachable until they are personally affected by the tragic consequences of their political choices. But, by then of course, it may be too late.”

Grigsby said she is “touched and honored that HRC would deem my contributions worthy of recognition.” On the night of the gala, when the award was presented, she told Out In SA, “You’d better get my picture before I get the award because afterward I know I’ll be crying.”

On the Chartreuse Couch: Bill Goodman

Gene: Bill, thank you for joining me on our lovely gay-friendly Chartreuse Couch. There are several topics that I want to inquire...