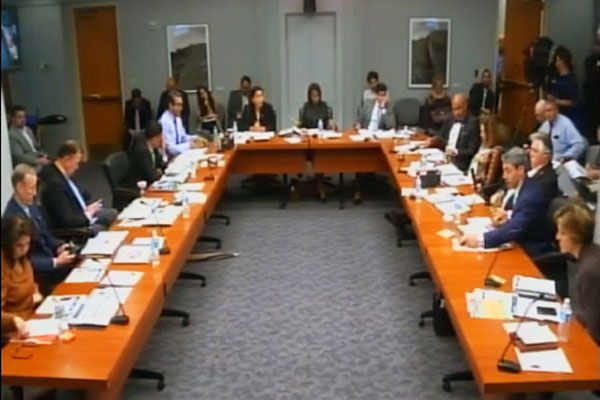 City Manager Sheryl Sculley announced the name of the person who will run the city's new Department of Diversity and Inclusion during a City Council B Session on May 13. (Video capture: TVSA)

City Manager Sheryl Sculley has named the person who will run the mayor’s proposed Department of Diversity and Inclusion. The announcement came during a budget discussion at the City Council’s B Session on May 13.

The position of human relations liaison will be filled by Claryssa Cortez who, according to Sculley, currently works in the city’s business development office. Sculley added that Cortez is on a management fellowship.

Cortez will report directly to the City Attorney. She will be responsible for running the new department and fielding questions and complaints under the city’s nondiscrimination ordinance. In terms of the budget, Sculley said Cortez is assuming a vacant position in the city attorney’s office and her hiring will not affect current spending projections.

Last March, Mayor Ivy Taylor outlined her plan to hire a human relations liaison to handle complaints made under the NDO and head up the proposed Department of Diversity and Inclusion.

Taylor, who is currently in a runoff campaign for reelection, voted against the NDO when she was a councilwoman.

In brief remarks about the proposal, the mayor said the new department would serve all protected classes in San Antonio. She thanked members of her LGBT advisory committee for their help. Present in the room were Robert Salcido and Marsha Warren. The third member of the committee, Ruby Krebs, was not in attendance.

The evening at 6 p.m., local LGBT activists plan to speak during the Citizens to be Heard heard portion of the City Council’s meeting to support the creation of the new department. The final vote on the budget comes during the council’s May 14 meeting which begins at 9 a.m.

This is a developing story. Check back later for updates.

San Antonio elections 2015: by the numbers

From Sophia Parafina, data janitor and geographer, who's been putting her map-making skills to use in the wake of Saturday's...