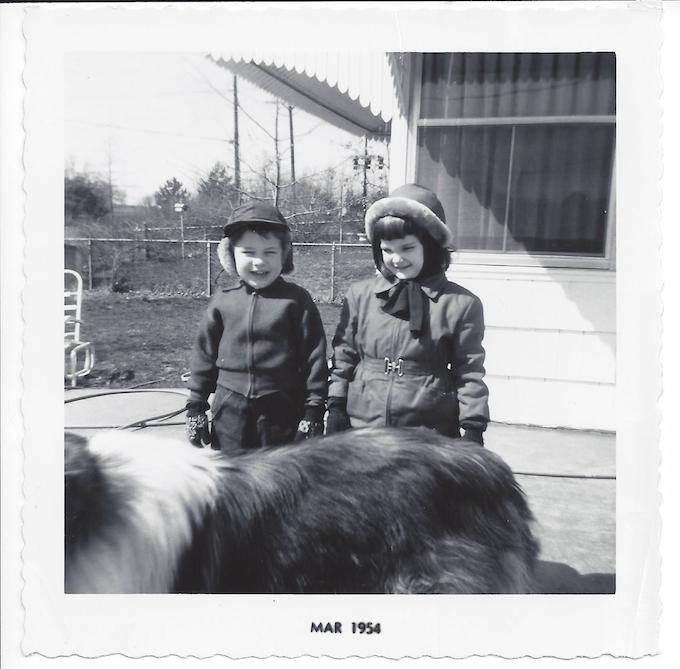 A young Gene Elder and his friend Marcia – playing outside of their closets for a change. Photo courtesy Gene Elder.

Marcia and I would spend considerable time playing in each other’s closets during our kindergarten years. Her closet was narrow inside with two wide sliding doors. We would pretend her closet was an elevator where we would spend the day getting on and off as we went about our shopping sprees at our favorite department store. Her mother put a stop to this after awhile because she didn’t like the idea of Marcia entertaining young boys in her bedroom.

When we couldn’t play elevator we went down the street to my house. My closet was rather large, being one of those awkward attic spaces created by the roofline of a two-story house. My closet was a spaceship. On one wall I drew a steering wheel with control buttons, and on the opposite wall I drew a big picture window with a tornado in it. We would spend the afternoons having tea at our little table while we remained in a perpetual state of running-away-from-the-tornado. Sometimes I would steer, sometimes Marcia would steer. We talked and made plans about other things to do. My mother didn’t mind if I invited friends over to play spaceship.

At the time, all this seemed perfectly normal, but then what do children know about closets?

As soon as I walked backstage for a sneak peek of Leighton Whittington’s debut fashion line, “Salvation” for Leighton W....