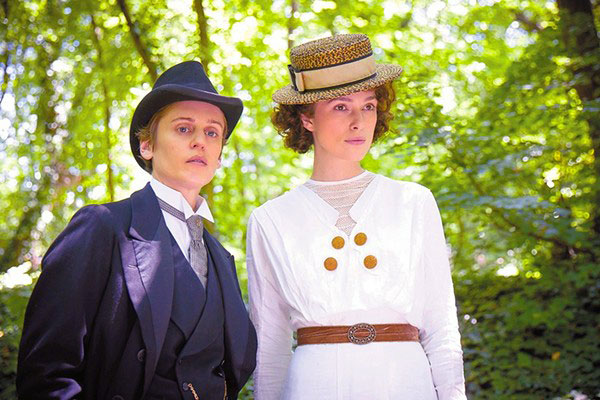 With the rush of awards season still a few weeks away, the art-house-lite attractions begin to blur together into a vaguely familiar mix of modest period settings and upper-middle-class drama, set to a chamber orchestra and with just enough feminism and gender issues to seem reassuringly (yet mildly) relevant.

And so it is with Colette. Like the recent Lizzie, Colette begins in 1892, and while no one is likely to confuse Colette’s rural France with suburban Massachusetts, you still might be caught off guard by the early appearance of Fiona Shaw, who played Lizzie Borden’s stepmother and here graduates to full motherhood for a new repressed heroine. As the film continues, a significant portion of the narrative follows a storyline that matches almost step by step a major segment of the season’s other literary drama, The Wife. Only the absence of either a media-savvy thirteen-year-old or Ruth Bader Ginsburg prevents Colette from scoring this season’s full indie-film trifecta.

Once you shake the sense of déjà vu, Colette is a harmless and comfortable entertainment, a stroll through a fin de siècle France of top hats, Impressionist landscapes and country walks, where every character follows the established movie code of speaking with a reassuring English accent (even though they write in French). It’s the story, albeit abbreviated, of the writer Colette, who charmed Paris with semi-autobiographical tales of her youth, broke a few taboos about gender and sexuality, and, in the film’s dominant storyline, broke through the confines of the male literary establishment to find her own voice.

It’s also one of those speeding-through-history films where you’re expected to forget about details and just enjoy the ride. When we first see Sidonie-Gabrielle Colette (Keira Knightley), she’s a young but not particularly innocent country girl conducting a secret affair with a family friend, the pretentious and self-enamored writer Henry Gauthier-Villars (Dominic West), who conducts literary business under the nom de plume “Willy.” Within minutes, the film transports her to Paris as Willy’s wife, trying to hold her place among her husband’s condescending friends, overlooking his romantic indiscretions and ultimately taking a place as one of many ghostwriters actually producing the work published under his name. When the stories of her alter ego Claudine become a public sensation, the young writer is liberated, embracing her new toujours gai attitude by dropping her first name and pursuing her own casual affairs.

As directed by Wash Westmore-land (who also co-authored the screenplay), Colette is erratic and inconsistent, but flits about so casually that its irrational shifts seem almost deliberate. One minute Willy and Colette are the toast of Paris, swimming in wealth; a few scenes later, they’re dodging creditors. Paris society consists largely of close-minded snobs, except when it’s dominated by enthusiastic, convention-flaunting Claudine fans. Colette and Willy have a devoted but open marriage — their concurrent infidelities are turned into a brief comic scene — until Colette somewhat arbitrarily rebels and demands her independence.

That last plot shift is typical of Colette‘s capricious tone. It’s amusing, and Knightley and West are reasonably engaging, but when the filmmakers try to hit a serious note, it seems impulsive. It’s transgressive, but in an almost anachronistic way (Colette has an affair with a young cross-dressing aristocrat who wouldn’t be out of place in a von Sternberg film). It’s feminist, but only when it becomes convenient for the filmmakers to convert the otherwise amiable Willy into a patriarchal straw-man villain. It wants to assure us of Colette’s literary stature but uses her writing career simply to move the story along, until finally deciding fairly late in the film that it should be an emblem of her independent spirit. The filmmakers want credit for telling a timely and important story, but they take shortcuts to get there.

The intentions are good, but they’re just the slim afterthought to 111 minutes of breezy but insubstantial literary gossip and period-piece window dressing.

“Colette” is now playing at the Santikos Bijou Cinema Bistro.