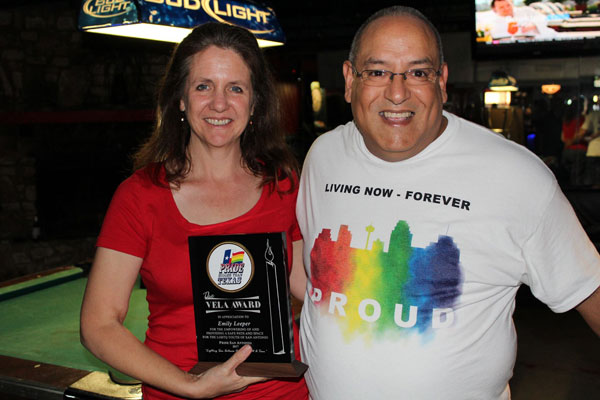 The Pride SA Festival and Parade, which were held on July 1, attracted thousands from the community to the Main Avenue Strip. James Poindexter, board secretary for Pride San Antonio told Out In SA that this year’s parade had a record number of first-time participants and was the largest ever with 120 entries.

“The competition was quite fierce,” Poindexter said. “The veteran groups really stepped up their game. In the Walking-Marching category, we felt compelled to recognize two groups beyond first and second place because there were so many good ones. For some awards there were ties.” One big award for parade entries is the President’s Award which is given for overall presentation, enthusiasm, design, and adherence to theme. This year’s prize went to the Tennis Club of San Antonio.

“The Tennis Club’s spirit and visual display truly encompassed this year’s theme of Living Now, Forever Proud,” Phillip Barcena, board president for Pride SA, said at the awards ceremony. “In a two-year period they have become an international tennis stop and raised over $25,000 for the Thrive Youth Center for homeless LGBT youth and for veterans here in San Antonio.”

Every year, pride officials also present the Vela Award to a local activist. The award is named for Carlos Vela, one of the founders of Pride SA. This year, the award was given to Emily Leeper, the founder of Fiesta Youth.

The mission of Fiesta Youth is to provide “a safe, non-judgmental, affirming place for LBGT teens to express and explore who they are through education, peer-support, advocacy and friendship.” The group meets on Tuesdays from 6:30 to 8:30 p.m. at University Presbyterian Church.

“The word vela is Spanish for candle,” Poindexter said. The Vela Award is presented to someone each year who Pride San Antonio believes is lighting the way for equality in San Antonio.”

An individual award also was given to Michael Rendon, the co-commissioner of the Pride San Antonio Gay Softball League, who was presented with the Sister Love Summers Award for Volunteerism.