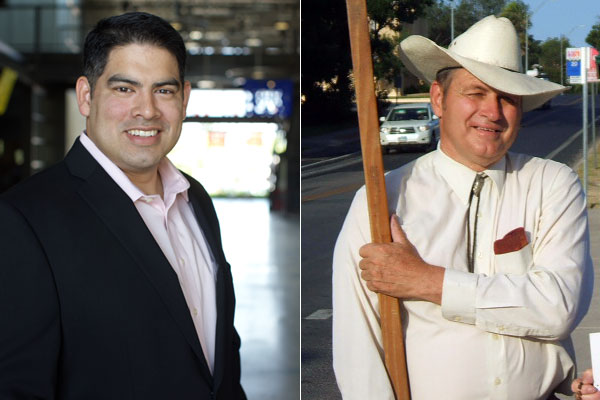 If you’ve ever been to a City Council meeting (or, to be honest, any public meeting), you probably have seen Jack M. Finger.

He’s the perennial “citizen to be heard” at every public meeting, your token old-guy watchdog there to grandstand about misuse of city funds and government overreach and, at times, entertain. Jack Finger protesting in front of H-E-B Plus in 2006. (Photo: Sam Sanchez)

Longtime members of city council have grown accustomed to his persistent commentary at council meetings, and often nod respectfully as he pounds his fist on the podium or determinedly twirls a finger in the air. Sometimes you might see a smirk from Rey Saldaña, or a certain dryness in Mayor Ron Nirenberg’s “First up, we have Mr. Jack M. Finger,” an announcement that routinely kicks off the public statement chapter of the weekly meeting. Sure, they may roll their eyes in private over Finger’s tired tirades, but it seems they all make an effort to give him the same respect they would any other member of the public sharing their concerns.

But on Thursday, Councilman Manny Pelaez, a relatively new addition to the council, appeared to break that silent rule of decorum.

Commenting on a post in the Facebook group Ideas for COSA (a public forum for local politics hobbyists to share their take on city projects), Pelaez noted that Finger was in “rare form” at the council meeting that took place earlier that day.

He went on: “His frontier gibberish was indecipherable. He yelled something about orgasms and animals. I’m not kidding.”

It’s an opinion any regular citizen can hold. But for a person elected to represent his constituents by listening to their concerns in a public forum — and respecting them — Pelaez’s zinger comes with a bit more gravity.

Also: What exactly is “frontier gibberish”?

Pelaez is a frequent commenter in the Facebook group, and, until now, has kept his comments light and respectful.

Here’s what Pelaez has to say about the comment: “Mr. Finger is a weekly contributor to our City Council meetings and is known for his outrageous, bigoted statements. However, he absolutely has a right to express himself… and so do I.”