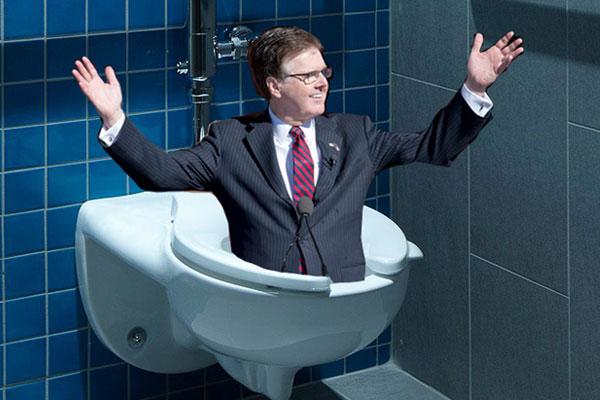 Despite warnings from companies across Texas that a “bathroom bill” would be bad for business, Lt. Governor Dan Patrick remains steadfast in his plan to support the proposed law in the upcoming legislative session.

The bill would prohibit transgender people in Texas from using bathrooms that match their gender identity.

Dubbed the Women’s Privacy and Business Protection Act, the bill is intended to assure “that sexual predators, like those who exploit the internet, will not be able to freely enter women’s restrooms, locker rooms or showers and that businesses are not forced by local ordinances to allow men in women’s restrooms and locker rooms,” according to Patrick.

A statement issued by the Lt. Governor’s office says the legislation does not discriminate against any individual or target any group.

On December 7, the Texas Association of Business released a study that estimated Patrick’s “bathroom bill” could cost the state up to $8.5 billion and the loss of more than 185,000 jobs.

A similar bill, HB2, was passed in North Carolina and has meant a loss of $630 million in lost business for the state according to Forbes magazine. In September, the NCAA yanked seven championship games from North Carolina in protest of HB2.

If the Texas Legislature passes a bathroom bill it could risk the City of San Antonio losing the NCAA Final Four basketball tournament which it is scheduled to host in 2018.

In a statement, Patrick characterized the TAB study as “misinformation and fear-mongering regarding a bill they haven’t even seen.”

In an attempt to dispel the notion that the law would affect businesses, Patrick recently suggested the focus would be on schools and not on businesses or sporting venues.

In response to an inquiry from the Texas Tribune, Patrick’s office said, “the need for this legislation was largely generated by President Obama’s presidential bathroom edict that would have forced schools to adopt a politically correct bathroom, locker room and shower policy that was an affront to common sense, safety and decency.”

Last June, when federal guidance urged schools to respect trans students’ identities, Patrick proclaimed, “I will be sending a letter to every superintendent in the state of Texas letting them know that they should not move forward on the President’s guidelines.”

On December 6, State Senator Jose Menéndez of San Antonio filed Senate Bill 269 which would increase the number of...